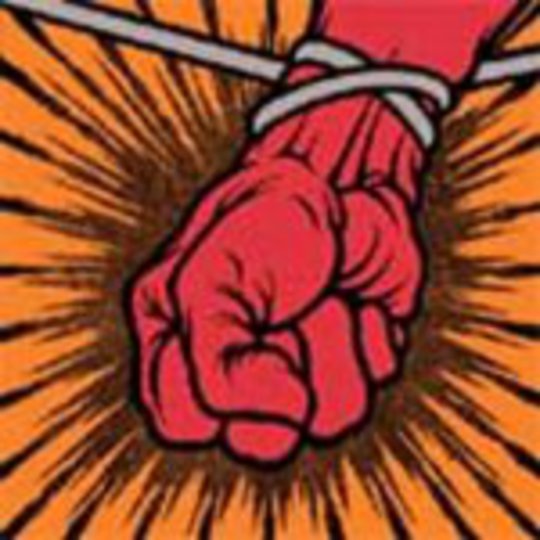 Those crazy fools have been pestering me to pass judgement on Metallica. Yes. The mighty ‘Tallica. Bit strange I thought. They’ve met me. Know what I’m like. Bit like a confused deerhunter on the prowl for some Wild Turkey and a bag of overused superlatives. Oh well. Must be venting their rage at the machine, man, ‘cos this lil’ baby is cruising the crazy 'St. Anger' vibe till it spits me back into the real world.

Heard a story the other day. Some old pals from down south were guffawing about my natty, elitist, shite boy indie rock taste in LPs. Boy heard I thought 'St. Anger' was the craziest piece of motherfucking metal joy since that time we all threw up on his Napalm Death leather jacket. Fell right off his worn-out bar stool. Cracked his head right open. Blood like syrup at a Jewish pancake rally.

This is the best heavy metal album since Lou Reed spat smack at Sepultura.

Dear ol’ James Hetfield is shouting like he never cared before. The long hard days of sobriety have taken their toll. They’ve made the poor whiskey chaser mad. Not in that turgid pant-wetting, nu metal way. But real angry. Like the last time I shot up his farm with my NRA-opposed Colt Magnum and freaked out his woman into insisting he shave off his Ted Nugent ‘tache.

And then there’s Kirk. He’s lost. He can’t find his guitar solos. The baggage handlers swear they didn’t touch them but they’re nowhere to be seen. Bob Rock probably stole them after he was done sweetening the sound of the huge heavy metal riffs meet I can actually hear the acid tongued melodies without sounding pussy.

Speed lightning metal this ain’t. But you find me two better ROCK songs than ‘Frantic’ and ‘St. Anger’ this side of Dave Mustaine’s soggy sell-out ass and I will crown you the king of ‘My World’.

But then there’s a new boy around too. Rob’s his name apparently. Looks like he needs back surgery, mind. And a pair of scissors to cut those bandy braids. But he’s no whinging ex-Flotsam member with a penchant for Neurosis riffs. This man’s tamed Ozzy. And it sounds like it. He’ll kick your mother’s head in if you question his bass. You won’t. It sounds fucking A. Heavy as…

It’d be too easy to label Lars a Shawn Fanning-fancying ferret basher. Or a twat. Indeed. But then the interweb carpet muncher went and learnt how to play the drums. Dear God. As some poor kid once said, it sounds like a bag full of screwdrivers being through down a sewage pipe. It sounds exactly like that. But that is a GREAT thing. No more simple kid, Fisher Price drum beats.

What about the songs I hear you scream? Well I won’t go into details ‘cos I haven’t got time and you need a break. But this ain’t no flash-in-the-pan 'Load/Reload'_ gash. This is the ‘Black’ album without the ballads or the naïve beauty. This is what Metallica should sound like without a symphony orchestra or the need to please.

This is not gonk.