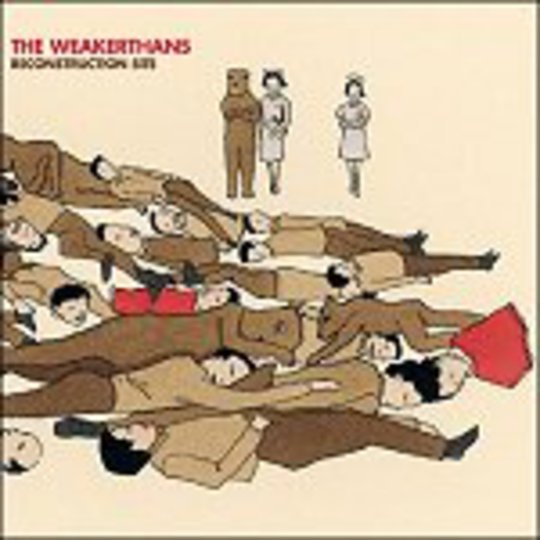 ‘Recontruction Site’, the third album by cult Canadian power poppers The Weakerthans, is an altogether harmonious affair, splicing in hints of folk, alt.country and lyrical twists. In short, put everything into that mixing bowl and mix it good – there is nothing remarkably different here to their previous output but it’s not gonna piss off the fans, that’s f’sure.

Indeed, there are highlights aplenty. ‘Plea From a Cat Named Virtue’ and ‘(Hospital Vespers)’ are straightforward pop with big choruses, while ‘Our Retired Explorer…’ has hooks a go-go and the immortal line “yes, a penguin taught me French back in Antartica”. Elsewhere there are more folk moments with ‘Time’s Arrow’ and ‘A Great City!’, with a store clerk playing the star of the song, its ode to their home city - “trying not to say, ‘I hate Winnipeg’”. The alt.country songs are easy to spot, cos they all contain pedal steel guitar, as all good country songs should. Arf.

The album sounds so warm and cosy. John K. Samson’s vocal and lyrical talent is the most immediate thing and, ultimately, what sets the band above the two-a-penny similar rock acts the world over. It’s probably not quirky and poppy enough to win over the young crowd who holler along to fellow Canadians Hot Hot Heat and, in places, it’s Americana for people who don’t like Americana, but The Weakerthans are too good to be ignored for much longer by the public at large. Buy this, it’s ace.