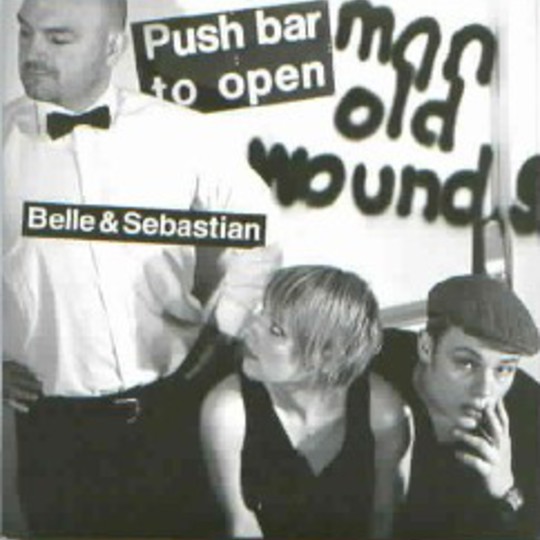 If any artists from the past decade epitomise the true spirit of independence then it surely has to be Belle And Sebastian. Formed by two students on a government training scheme, releasing their own self-produced demos as albums before anyone had heard of them and using the internet to rig the Brit Awards best newcomer poll in 1998. And even after that little episode they still refused to cash in on their moment of televised fame and milk it for all it was worth.

'Push Barman To Open Old Wounds' is a compilation of all of the band's singles for Jeepster Records between 1997 and 2001, and perhaps the most astonishing thing here is that despite releasing five albums over the same period of time, only one track from any of these EPs ('The State I Am In') appeared on any of their long players.

Talk about giving the fans value for money, but anyway, on with the review...

If the first single 'Dog On Wheels' was a bit of a let down in comparison to the two albums that preceeded it, then it's follow up 'Lazy Line Painter Jane' was probably the first indication that Belle And Sebastian would soon be moving out of bedsitland and into the psyche of the nation's youth courtesy of it's heavy playlisting at the time via daytime Radio 1 and ITV's much-missed 'The Chart Show'. A gorgeous five minute hammond dictated waltz that revolves around semi-sinful word interplay between Stuart Murdoch and Monica Queen, culminating in the evocative moment where both end up cooing "You will have a boy tonight, or maybe you will have a girl tonight?..."

'This Is Just A Modern Rock Song' meanwhile was feted as the "big" single, coming out just after the Brits' triumph, so in true B&S style, they released a seven minute version of the song as part of a four track EP, thus making it ineligible for the charts! Still, here in all it's glory, it marks the end of Belle And Sebastian mk1 as founder member Stuart David was to leave soon after to concentrate on his Looper project full time, although the signs had been there from the spoken word interlude of 'A Century Of Elvis' earlier on that the head of David was pointing in a different direction to the rest of his colleagues.

Belle And Sebastian mk2 could be heralded as being the start of their brief foray into making concise pop tunes, as the delightful 'Legal Man' and its accompanying b-side 'Judy Is A Dickslap' take the blueprint of seventies MOR bands like the New Seekers and turn it into something both plausible and entirely credible.

Soon after this, Isobel Campbell was also to depart permanently to concentrate full time on The Gentle Waves - again not a surprising move when listening to the likes of 'Le Pastie De La Bourgeoisie' off the '3..6..9 Seconds Of Light' EP - and after two more singles, 'Jonathan David' and 'I'm Waking Up To Us', the former featuring the poignant 'Loneliness Of The Middle Distance Runner', the band finally inked a distribution deal with Rough Trade (OK, still an indie but with a considerably bigger budget) and the second chapter of their story was at an end.

Most bands would probably rape their own mothers and sell the story just to write anything as good as most of the 'b' sides on any of these seven EPs. If you don't already own all of these singles then this compilation is a must-have addition to your CD collection. As a document of the way Belle And Sebastian have grown up in public to the sturdy staple of indie pop they now represent on a global scale, 'Push Barman...' is an essential collection of work that simply cements their status as one of the most inspirational musical collectives to have embraced punk's D.I.Y ethic since the late 1970s.