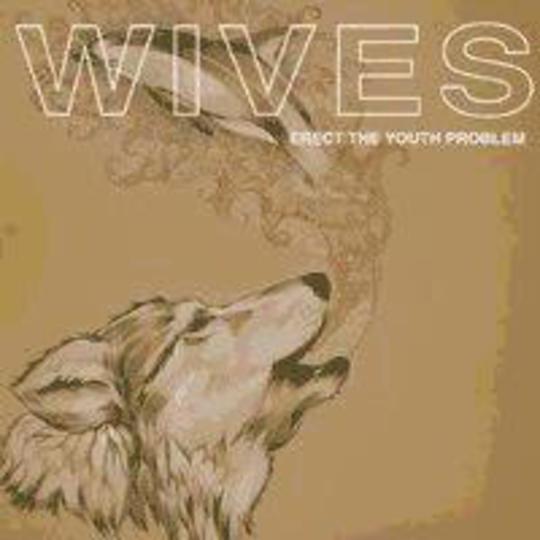 The goal posts have been shifted left, right and centre over the last 30-ish years, yet somehow punk has always emerged as a perfectly viable commodity, allowing those already in control of other markets to tap into rich, vibrant veins of youthful exuberance and vitality. The saturation of once exhilarating sub-genre scenes, most particularly those emerging brandishing unprecedented aural firearms from the other side of the Atlantic, has led to the kind of homogenisation that blights so much pop music. The result: too much punk today is anything but, instead sold on heritage, on ancestry and family trees of re-offending mavericks photocopied to the point of transparency. Right now the 'post' prefix remains at the cutting edge of the commercial spectrum, while the underground is forced to look within itself and to outside, avant-garde influences to evolve and, ultimately, return to the forefront of creativity and artistic self-satisfaction.

Wives are an LA-based trio fresh of face and full of fury. Their musicianship is not progressive, nor are their words overly poetic or their angle particularly controversial. Yet the sum of all contributing factors - the music on Erect The Youth Problem, their 17-track UK debut - is an absolutely head-spinning, pulse-racing and bar-raising blast of almost intolerable intensity.

Part of LA's underground punk scene - other exponents include Child Pornography, recent UK visitors the Mae Shi, and 400 Blows - Wives play fast and hard, lacing their songs - some short and full of aggression, others structured so that the eventual explosion is the product of gradual pressure - with a rampant vitriol previously unheard on any so-called punk record to emerge this year or the last. At times the band - guitarist Randy Randall, singer/bassist Dean Spunt and drummer Jeremy Villalobos - become so wound up that each member seems to spin off into a world of their own, independent of the confines of keeping time with bandmates yet also perfectly in tune with the chaos slowing manifesting itself musically around them. Such a track is 'Lunch Money', all throat-shredding vocals always running faster than lungs can possibly manage, always trying to remain in touch with the discordant maelstrom contaminating the studio air. 'Wasted Again, Again' performs similarly gymnastic larynx tricks, beginning relatively slowly before ripping into a pulsating, primal, angry-to-fuck punk-rock masterpiece, Spunt spitting out with absolute disgust:_ "Wake the fuck up, you fucked this one up."_

At whom the band are venting their rage toward is hardly ever clear. 'Squeeze Your Eyes So Tight' offers some literal understanding, the band fearing a totally apathetic reaction to their ferocious live show from the sorts that should be embracing their efforts: "This seems so wrong, I put myself on the line... They all look like, they all look like... DUMB COLLEGE KIDS." At other times the lyrics are completely lost in the hundred-degree heat haze of hateful-sounding and viciously hacked riffs; if Wives didn't snap a thousand strings during the making of Erect The Youth Problem, then their guitars must be futuristic models with laser beams in place of pick-ups.

As primitive as some of the music is, though, these youthful upstarts have at least an eye each on the future, on development and progression and a success outside of the everyday. Spunt simplifies his position and his desire to ditch it into the nearest receptacle on 'Babies': "I'm much too young to look this old, and I'm much to young to have this hair..."

And then, the frustration that drives all creative artistic offerings that stand the test of time bubbles to the crater-peppered surface: "...and I'm much too young to be unimportant."

2005 has seen great punk-rock releases attract critical recognition beyond the 'zine community - Bullet Union, Bear Vs Shark and Transistor Transistor have birthed records that aren't just recommended but downright fucking vital. This, though, transcends their acclaim. It's as amazing as hearing The Icarus Line's Mono or At The Drive-In's Relationship Of Command for the first time. It's as addictive as the dirtiest of pop records being listened to in an entirely inebriated state. It's as brilliantly complete as a punk-rock record can be without spontaneously combusting within your CD player. It's uncommercial, totally uncompromising, and absolutely essential.

The Dead 60s, The Kooks at The Rescue Rooms, Nottingham, Nottinghamshire, Tue 28 Jun