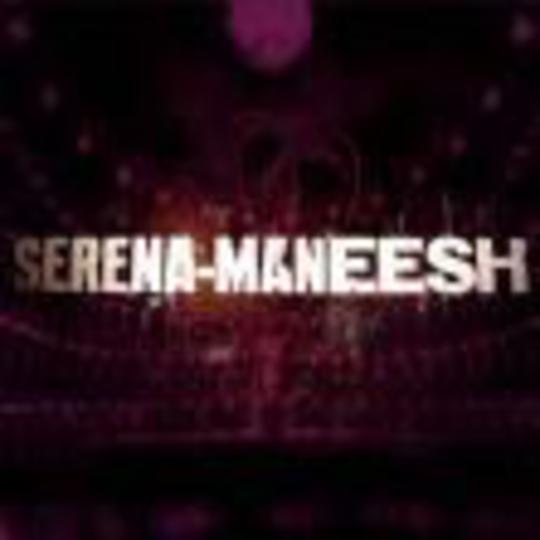 Something somewhere is about to erupt. Through keys, beats, static and frostbitten vocal cords a dull throbbing under your feet grows from resolute aching to a buzzing, twitching cacophony. With their self-titled debut album, Serena Maneesh draw from the greatest protagonists of both rock and post-rock to construct something that, while derivative, is also undoubtedly theirs.

It's opener 'Drain Cosmetics' that gets me itching with restlessness first. Swaggish and daunting, its drive towards fatherless noise tempers melodies that hang so sweet they might as well have trickled from the gums of Samaritans and Angels. It is, without doubt, majesty; the kind to swell your chest and put warmth into tired, frozen minds. The sort of song to comfort paradise-seeking backpack bombers before they stake-out their terminals; coming on both swooning and dominant, detonating in a hell-blind fury of gut-wrapped C4.

While it's slightly disappointing that the lofty altitudes scaled in the album opener are not reached again, its dizzy collapse is one that resonates through the record, shooting it with quality.

Their ingenuity is such that the Norwegian band manage to achieve something which I thought would be, if not impossible, then certainly very difficult. By marrying the subtle ethereality of bands like MBV with the swashbuckling pomp of a modern-day Iggy, they are a band at once single-minded and confused. This plurality of mindset results in an ominous, schizophrenic face-off, contested in the main between the tuneful strains of the male/female vocals and instrumental white noise. The idea that the whole thing could have been directed by self-proclaimed 'lead musician' Emil Nikolaisen is probably close to the method Bowie employed on 'Aladdin Sane', with the musicians shown the intended destination up ahead and then having some room to manoeuvre in their efforts to make it there.

It's in this vein that the album continues; the drunk rush of 'Un Deux' reclaiming the seriousness Four Volts bled on the alter of icy-pop, ('She Muddied the Water'; if you want to hear something brilliant get this album) while the beat-laden 'Candlelighted' fizzically hums with bold intent. It's tribal, choral and excited like a first-time encounter with elated serotonin. Listen loud: Fall apart smiling. It's that simple.

The record does seem to benefit from having Nikolaisen as its dictator. With him at the helm you get the feeling that his vision goes unclouded, his bandmates elaborating upon a central theme of conflict and tension.

What develops over the course of 'Sapphire Eyes' is what all those tired blues-rock-hog bands yearn to do but don't. There is as much determined longing on this song as you can muster before a big night out, but it actually works. No longer the lonely; relax and enjoy the spuming suicide it works on itself, before descending into wall-hidden beats and scummer-radio fuzz. Know that they've got files on you. Then, sans warning, it meanders off down a leafy Parisian avenue - from sour grapes to cherry blossom, and back again, before the whole thing's stamped into the ground by Industrial pistons and tormented AM frequency.

The 'build it up, knock it down' card is one that Serena Maneesh seem to revel in playing. With the wild-eyed glee of an addict they insist on floating their music atop glorious, melodic pedestals before smashing the whole thing up like a toddler might a Duplo tower. 'Don't Come Down Here' hovers beautifully for a while, before taking a surly turn. The only warning we get is one looming bass note, before the guitars rip through the lining of the song and wreak general havoc. Suddenly there is action in its eyes, it's sipping from stolen wine and it turns into a disastrous '(When You Wake) You're Still in a Dream'. Then a bell rings, and the tonic of melody lazily sets about reclaiming its old haunt. It is big, and it is beautiful.