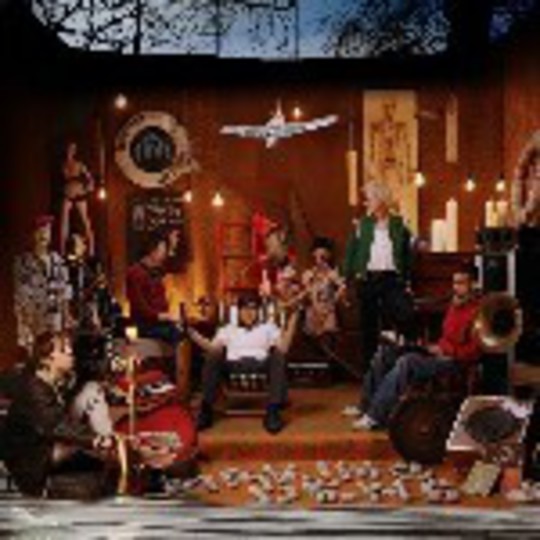 There's something awfully Swallows And Amazons about the Mystery Jets, from the nautical imagery to the mini neverland of their Eel Pie Island HQ. A playful spirit, a refusal to grow up... call it what you will, the essence of childhood is distilled in their music, and Making Dens realises these sensibilities in a concise, passionate, and surprisingly sad pop debut.

It could have been such a messy record. Like the peculiar, famed little island where so many of the Jets' ideas find form, their music tends towards the overgrown: indulged possibilities snake every which way and entwine each other, leaving the listener an intrepid rambler in a veritable forest of sound. Prog-tastic as they may be, though, Mystery Jets' creative diversity is compressed into three-minute snatches; these are brief, peppery pop songs, vividly rhythmic and memorable.

The versatility of Kapil Trivedi's expert drumming is ever apparent, augmented by Blaine Harrison's ragtag percussion; 'Horse Drawn Cart' skitters across cymbals, and 'Alas Agnes' is as resplendent in its skiffly, tragi-comic charm as it ever was. Elsewhere, calypso rhythms grin at steel drums, and 'Zootime' throbs with a manic, lo-fi-sci-fi piling up of sounds, percussion and space-opera "aaah"s. Throughout it all, the band's many-faceted, tangled vocal harmonies weave a coarse-woven texture upon which Blaine's shrill, occasionally vibrato lilt embroiders the stories that set Mystery Jets apart from their peers.

Don't imagine, however, that Making Dens is the sound of children lost happily in self-assembled jungles of make-believe and musical mania. An adult perspective peers over the shoulder of almost every song, reining in the Jets' more self-indulgent side, and painting Making Dens in shades of nostalgia and rueful hindsight. Sepia-tinged yesteryear narratives come to life with injections of modernity both prosaic and absurd, from hospital Nintendo consoles to back-street sex-changes.

There's a sense of these songs being penned to provide escapism rather than document it; 'Purple Prose''s ode to globe-trotting feels more imagined than remembered, and 'The Boy Who Ran Away''s Whittington-esque tale of running away to London ends with a bitter dose of reality - "And now that the wheel has gone around / He's back where he belongs / And he knows there is no hope / Only solace in the words of this song". The strongest dose of pathos, though, is administered by the painfully autobiographical 'Little Bag Of Hair', the confined melancholy of its lyrics distilled through childhood naiveté - "Let's play nurses and doctors until the real nurses and doctors come".

Yet, true to its childlike character, such sadness never weighs Making Dens down. Each moment of solemnity is bounced back from with humour and excitement, and its thoughtful, odd lyrical themes are balanced by the band's joyful musicianship. Even where feverish activity gives way to more sober moods, the feeling is pensive, not maudlin, and for the most part this ambitious debut is vibrant and infectious. Bypassing traditional melodies and obvious aesthetics, Mystery Jets have arrived at an unusually original pop album of the most exuberant order.

Betty and the Selfish Sons EP

“We’ve been dismantling the rules since Antidot...