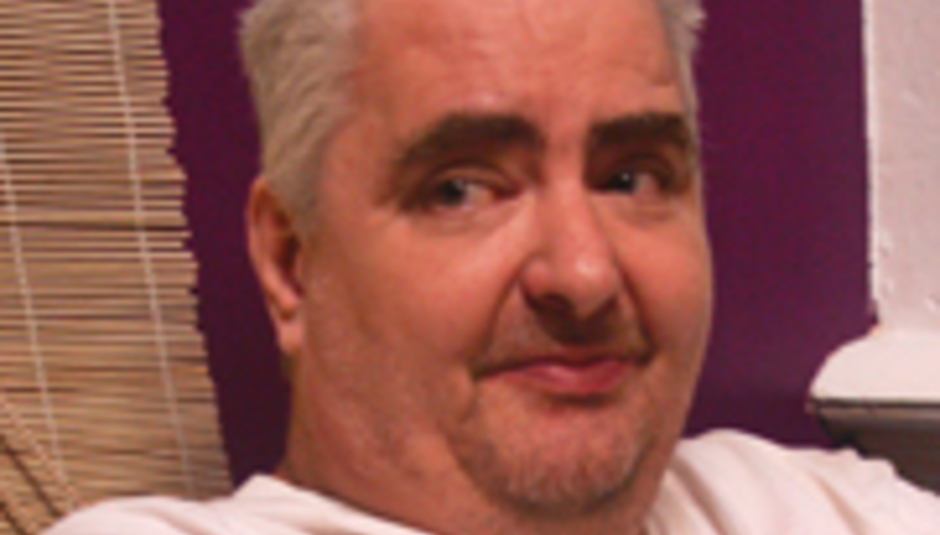 To the likes of Beck, Conor Oberst, Bowie, Flaming Lips, Mercury Rev and a whole raft of other notables, Daniel Johnston and his simple but profound songs are genius. To others, such as a random DiS comments board contributor, "he's just a fat nutter that draws like a 12 year old and makes poor music".

A manic depressive whose life has been seriously affected by his condition, Johnston began song writing as a child but didn't record until into adulthood. Interest in his endearingly naive music goes back to the early '80s when he was freely distributing his home made cassette tapes around Austin TX. Local musicians started to take notice, name-checking him in conversations and interviews until eventually Kurt Cobain was seen wearing a T-shirt bearing Johnston's Hi, How Are You? album artwork at the 1992 MTV Music Awards. Overnight, the man reached cult status. Of his widespread appeal, DiS writer Sam Lewis noted succinctly in a gig review here from May this year that, "in a way, he embodies so fully the struggle to be liked, loved and understood that such a large chunk of 'us' can relate to, and occasionally struggle with, ourselves. Daniel Johnston is just the extreme of that struggle."

Recently Johnston has returned to playing live under the watchful eye of his brother and tour manager Dick. Tonight he's in Cardiff where DiS’s Jane Oriel and photographer Stefan Hinc venture into the man's dressing room to meet the legend.

You've played all nations of the British Isles this week. Do you enjoy being on the road?

"Oh, I'm tired," he sighs. "It's fun but it's wearing me out. Tonight's gonna be the fourth one this week."

He certainly looks tired, and as he leans back on the couch, rubbing his eyes, I notice that he's wearing that T-shirt. Travelling with Daniel and Dick is guitarist Brett Hartenbach, an old friend from Johnston's college days. The current shows play out in three parts: Johnston solo, then joined by Hartenbach, and finally the stage holds a full band made up of local musicians from each visited town. At soundcheck earlier this evening, I spot Simon from The Loves, Rhodri Viney from Eugene Francis and the Juniors, and Cymbient's Andy Fung, amongst the numbers.

What's it like playing with a different band each night?

"Well, these people tonight I've just met and I don't know who they are. I told them they'll have to introduce themselves with their own names as I don't know them. Everywhere I go would be another band of people I didn't know, playing the same songs. It's fun to do. It's fun to go shopping and stuff like that. Every time I go to do an album I like to have different people to do it with. It gives a different feel to the album, so I've done that a lot."

Do you ever get people coming along to play with instruments that you might not have expected?

"Ah, it's like rock and roll mostly; guitars, lots of guitars and drums and bass. I've even started to play electric guitar myself," he flourishes with a burst of childlike pride in his achievement. "And on it, I had my new hit, 'Mean Girls Give Pleasure'. We're working on an album too with my friends in Danny and the Nightmares. So, all kinds of stuff is going on."

Danny and the Nightmares is Johnston's band back where he lives in Waller TX.

"They're friends of mine that I met in town and we jam all the time. We have lots of new material, so. It's a lot of fun but we've had a lot of bass players. We can't keep bass players. What we have to do is find one to stay with us because I'd like to make the big time with them."

So you make a good garage noise?

"Yeah, we sure do," he chuckles at the thought of it. "I'm working with some really great musicians and we're supposed to be having some studio time so something like that might just happen. Whoever's around might just end up on the album. I've got a lot of new songs and my brother wants me to try and make a record out of it. So I've got enough new songs to try and get something out of it. When's that other photographer going to set up?"

We all turn to look at a second snapper from a different publication who has been busying himself with his camera gear (and accessories) since we arrived.

"I don't do any nudey shots. No, my mom and dad would kill me if I did nudey shots, they really would," he teases, making us laugh, but then ponders the prospect out loud. "I once had a fantasy about doing that kind of thing, you know. But that'd be like a nightmare if people had pictures of you naked," he adds, verging on the indignant.

I hear Lost and Found is being released for the US market soon, even though it's been available in the UK since 2004?

"It seems to me that, in the UK, their releases come out right away but in the United States we'll be, like, waiting years for an album to come out, and it just doesn't work. It's frustrating. I like to get albums out there for people to listen to and they are looking forward to hearing some new music from me because if it's not there, they'll just forget about me I guess."

Even though you are not releasing new material as often as you might like, so many people are keeping your songs current by covering them for tribute albums.

"There was a tribute album they put together for Gammon Records. (Discovered Covered - The Late Great Daniel Johnston from 2004, with contributions from Tom Waits, Clem Snide, Death Cab For Cutie and more) That was real good. I liked that one a lot."

Why do you think so many people hear your stuff and say, “Hey I want to handle that?”

"Uh, I dunno. I don't have any idea. I try to write songs. I don't write songs all the time like I used to. I want to… I want to start writing again. I feel like I can."
Johnston drifts off into thought again.
"I do a lot of drawings," he suddenly chirps up. "I'm always drawing pictures and stuff so maybe I could get back into it, I know it could happen but..."

Johnston's thinking out loud again, which makes me feel both privileged and intrusive at being party not to a straight Q-and-A session but admitted instead to the machinations of someone working though fears and concerns by giving them voice. As with his musical back catalogue, he presents an uncanny absence of self protection.

His mental problems are public knowledge but in the press release for Jeff Feuerzeig's documentary film, The Devil and Daniel Johnston (link), they make free with descriptive words that to some, might be seen as derogatory.

Are you okay about some in the press using words 'mad' and 'madness' to describe your condition?

After a long pause, he answers with a drawn out sigh: "Yeah, sure".

I wait to see if he plans to say anything further but, instead, he sinks back into himself and his thoughts. After a polite time lapse, I tentatively venture in again.

I understand you were writing loads and loads of things then, in the beginning of the '90s, you found the right medications to even you out?

"Yeah, I finally found the right medication," he replies, sitting up attentively. "I've been out of hospitals now for almost ten years, and I spent five years locked up before, so I really am grateful and I'm trying to pay attention to my prayer time and to keep things going. And I'm excited about the different things we are playing, so... Everything's going pretty smoothly. It seems like everybody knows what I'm doing. Everyone approves and there's no objection that much. (I'm assuming here that he's talking about his doctors.) I have a lot of older material that I still want released and stuff like that, hahaha.."

It's obviously far better for you as a person to be level, content and balanced but when you're feeling okay, does this mean that you don't feel like writing so much?

"U-huh," he agrees, nodding. "When I'm writing, I remember and I'm feeling really good, then when I stop writing I'm just watching movies and I'm in another world and I've forgot and I've got to get back, you know. I'm glad that some people like the music and everything. So I've had opportunities, so I'm going to try and go for it, you know."

How much do you think that your condition is responsible for your all your art?