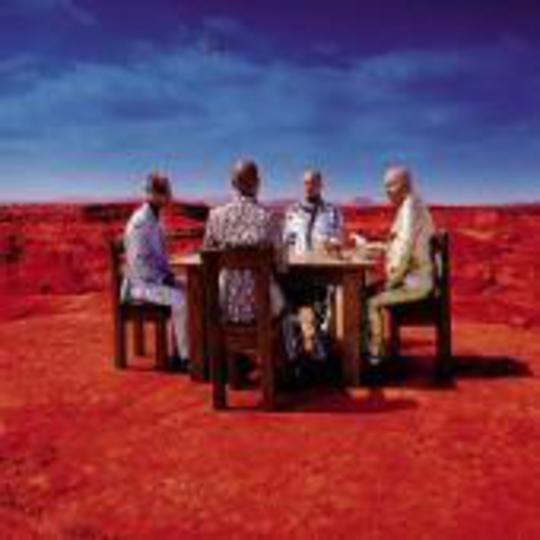 How to start a review when all that’s rattling within your brain is its conclusion, the final, perfectly summarising parting statement? Muse have made the finest album of their career to date, perhaps the most wonderfully rewarding long-player they’ll ever pen, an album that is as ambitious as it is combustive, as bamboozlingly bombastic as it is gracefully seductive.

How about at the start itself…

Black Holes And Revelations unpredictably unveils itself slowly and cautiously – that single, the sound of Beck being mercilessly ravaged by Trent Reznor, has seen expectations rise to a level unprecedented, so it’s slightly surprising that Messrs Bellamy, Howard and Wolstenholme pitch their comparatively poorest cuts into the affray first. Opener ‘Take A Bow’ ripples and bubbles, a Grandaddy-esque electronic pulse beating like a pacemaker fuelled by fiery sunspots, but Bellamy’s lyrics – quite obviously political, as has already been widely reported – are one-dimensional to the point of Blunt-like banality.

A screech of tyres on sticky sunburnt tarmac come four-and-a-half minutes and the repetitive thud-thud-thud of ‘Starlight’ begins: an entirely bland power ballad in the hands of any other rock band, Muse skilfully twist undeserved drama from an essentially mundane composition, yet never truly engage the listener. Their cause isn’t helped by a clunky chorus, either, seemingly in position only to offer the illusion of depth where, in fact, every other lick and lyric suggests otherwise. It’s a love song, simple as, and a far from inspiring one. Next.

Black Holes... is a dizzying rollercoaster, a stand-up-too-fast headrush, a beguiling beast of beauty and horror.

But what a next: this, track three of eleven, is where Black Holes And Revelations earns itself that grand congratulatory opening paragraph. ‘Supermassive Black Hole’ has a ridiculous title, Matt Bellamy spends its three-and-a-half minute duration sounding as if he’s lubing his larynx up for frenzied tonsil tennis, and its satisfyingly sleazy musical framework is about as expected as said frontman asking, breathlessly, “Ooh baby, can you hear me moan?”

Ice cream in soda, snails in porridge, Matt Bellamy playing kinky sex kitten: some things in this world were never meant to be bedfellows, but each and every time wonderful results are borne of their stars’ alignment.

From here on in Black Holes And Revelations is a dizzying rollercoaster, a stand-up-too-fast headrush, a beguiling beast of beauty and horror. ‘Map Of The Problematique’ initially sounds like a violation of late-Eighties Depeche Mode, but upon repeat inspections it reveals itself to be quite the musical onion: peel the layers away and you’re likely to cry foul at its plagiarism, but consume whole and the sensation is striking. At the song’s core are Dominic Howard’s incessant drum beats, each strike of stick on skin booming like a meteorite impacting upon the Moon’s surface. ‘Assassin’ is better still, its opening riff cheekily robbing, unashamedly so, from the title music of Knight Rider. Probably the fastest three minutes in the album’s forty-five, the song serves as a stylistic bridge spanning the slightly over-the-top histrionics of ‘Invincible’ and one of the album’s most talked-about offerings, the swaggering ‘Exo-Politics’.

Bellamy is on record as saying that ‘Exo-Politics’ is conceptually concerned with conspiracy theories, with questions the layperson should be directing the way of governments with all switches seemingly stuck on self-destruct, but the song doesn’t get bogged down in intellectualisms: it, like so many of these songs, is primarily a rock song, and a fantastically fun one, too. For all the prog labels that Muse find themselves subjected to come each album release, there’s little on Black Holes And Revelations that even the most thick-skulled Neanderthal couldn’t get whiplash from – the head-banging possibilities are plentiful.

The album’s rear end is characterised by splashes of Morricone-coloured embellishment, each tiny facet of sound comprising an essential piece of this puzzling album – on paper, intelligence shouldn’t stand hand-in-hand with reckless excess quite so magisterially, so majestically. Come the record’s sustained climax, the scintillating ‘Knights Of Cydonia’ – surf rock re-imagined for extreme sports fanatics riding the shifting dunes of Mars – all the listener can do is allow themselves to be swept away in the rush. “How can we win, when fools can be kings?” asks Bellamy, a wall of noise just waiting to be unleashed all around him; again, the lyrics are wrapped up in see-through political analogies, but every time Muse’s singer delivers a slightly duff line, you can rest assured that a mighty riff will obliterate the memory of it in all of a few seconds. “You and I must fight to survive…”, and riff. A gigantic, rollicking, bucking, violent riff, battling and winning like a humpback hooked by a six-foot Kingfisher starter rod.

Black Holes... is likely to be the band’s OK Computer – the record that everything they produce subsequently is immediately unfairly rated against, ‘til time’s own sands sit still.

The urge to go around again is instantaneous, and even though Black Holes And Revelations begins with a whimper, its steady, ever-building roar is a wonder to behold. The work of three individuals arriving at the peak of their powers, it’s likely to be the band’s OK Computer, their Music For The Jilted Generation, their Dark Side Of The Moon – the record that everything they produce subsequently is immediately unfairly rated against, ‘til time’s own sands sit still.

Should they never make another album, Muse can retire safe in the knowledge that pretentious rulebook re-writing and perfunctory by-numbers rocking have never mixed so alluringly.