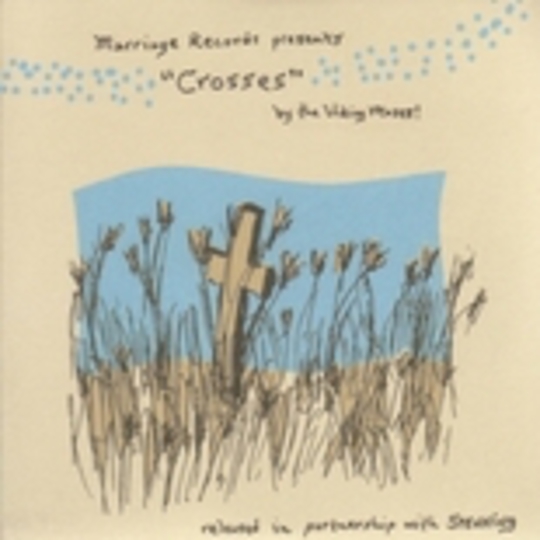 In comparison to the metropolitan furnace London has become recently, Viking Moses! (a.k.a. Missouri resident Brendon Massei) seems to belong to a different planet altogether. As I sweat and swelter over my computer, a chorus of workmen’s drills serenading me from outside, he seems implacably calm, a figure totally removed from the city. Crosses, Massei’s first album under said moniker, is a more introverted album than anything produced by peers and touring-partners like Devendra Banhart or Akron/Family, being closer to the warm intimacy of Little Wings than the more consciously talismanic Banhart.

The album, exactly half an hour long, exists as a paean to former partner 'Emma', with Massei managing to create a record both joyous in its appraisal of love, and understated in its expression of that jubilance. A million miles away from his wide-eyed, bare-footed on-stage persona, Massei here puts the focus firmly on his fragile baritone and the intricate lyricism of his songs (none any longer than three-and-a-half minutes), building the album around the fragmented images and moments of a relationship: “When you hold my little arms, you show me just how little I really am” he croons on 'Little Arms', and in 'Dancing By The Water' he pictures a couple “Watch(ing) as the boats move along... they push away all doubt and fear, install in their place faith and comfort”. Using only an acoustic guitar and occasionally a piano for accompaniment, the songs never overstretch themselves, lending lines like “Without love, life is gone / without life, love goes on and on” a touching sincerity.

I always feel that members of Viking Moses!’ circle never quite know how to limit their output, meaning that their best work is often drowned out by the oppressive scale of their back catalogue (Massei’s American labelmate Thanksgiving has managed five albums in three years, Little Wings seven in five), but here the record is prudently short enough to stop the charmingly naïve becoming childish and repetitive. There’s something infectiously uplifting about Crosses that endears it beyond its shortcomings - “I love the fishes that swim round me,” Massei sings on 'Little Emma’s Smile', an attentiveness to the minutiae of existence that seems increasingly out of place with city living. In this heat, anyway.