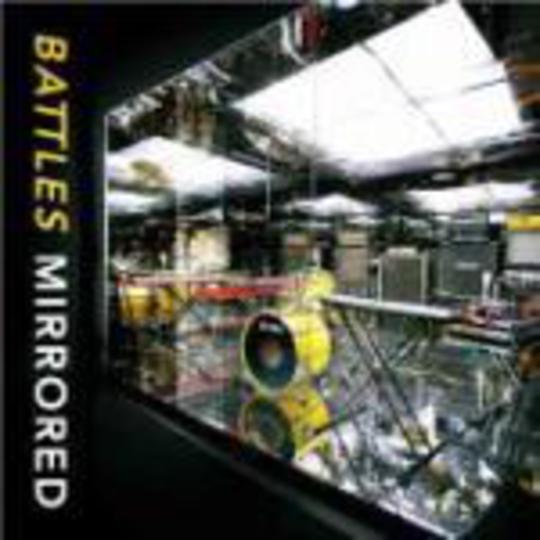 This is what I was expecting to hear, something like four weeks ago, following the third play of Mirrored that day in the DiS office. But no resistance was proffered; not one person stamped a foot down and demanded we listen to something a little more, say, easy. And the reason’s a simple one: for all the shop window dressing that accompanies the release of this, the debut album from Battles, it’s an album full of simple pleasures. You put it on; you dance in your chair. Simple, and _so_ pleasurable.

Sure, the constituent parts – the four individuals that comprise this super group but not supergroup – are wonderfully schooled in musical ways considerably wayward of the beaten track: Tyondai Braxton is the son of acclaimed jazz musician Anthony Braxton, while drummer John Stanier and guitarist Ian Williams served time in supremely leftfield alt-rock acts Tomahawk/Helmet and Don Caballero respectively, and completing cog Dave Konopka’s skills with the six-stringer are leagues ahead of many a would-be virtuoso. But such emphasising of the band’s technical ability detracts rather from the immediacy of Mirrored, from the record’s seemingly innate ability to have the know-nothing tapping along on but a cursory exploration.

This is a dance album, to be as succinct as is possible; it’s a collection of songs, of twisting and intertwining melodies and beat patterns, that make the listener – be they a jazz fan or a hip-hop fan or a rock fan or whatever – want to get up and jump around; they’re songs for handclaps and finger snaps, for arms-aloft celebration and the kind of revelry most associated with sweaty denizens of E-culture clubland. Anyone with only half their mind open, with the slightest desire to experience new sounds and visions, will already know that ‘Atlas’, Mirrored’s lead single (10/10 review and video here), is the best dance single of the year; here, in its seven-minute extended mix (12” mix, anyone?), it’s even more glorious than the version that pounds from your TV/PC while four men become sixteen become two-hundred-fifty-six like something from a sci-fi fairytale that’s on in the middle of the night on Film 4. It’s all glam-rock stomps and marching band brrrumpty-bumpts and finger mouse squeaks and possesses a spine-tingling incessancy comparable only with those hammers that just won’t quit in ‘Another Brick In The Wall’. It’s all brilliant, eleven ways up and seventeen times better than anything the band had previously produced. And that includes the impeccable elegance of ‘Tras’.

Quite amazingly, ‘Atlas’ isn’t even this album’s absolute highlight (although that’s partially because it’s such a neatly flowing LP, such a coherent and concise listen, that individual tracks merge and segue in such a way that it becomes a single composition, fractured merely for the sake of impatient consumers). ‘Ddiamondd’ twitters and flutters and spirals and builds and crashes and throbs wonderfully – screeches and alien laser blast buzzes battle against a tide of bass-heavy all-engrossing soundwaves. Pausing to skip a few tiny stones across the surface of the still ocean of ‘Bad Trails’ and ‘Prism’ – comparative breathers on an album of convulsive, spasmodic, limb-twitchers – the passenger’s tossed and turned throughout ‘Snare Hanger’, a glorious two-minute patchwork of disjointed vocal effects and drums from another dimension. But, as expressed earlier, the complicated means produce an oddly accessible end: not once on Mirrored do Battles forget that they’ve an audience to entertain, as well as themselves.

And this is why Mirrored is so much more than its preceding EPs – whereas before in their career the four-piece seemingly tossed myriad elements about with little to no regard for the actual acceptability of the composition at hand, here each and every piece – pieces that truly do flow into one another quite magically – sinks into the listener’s synapses silkily, short-circuiting them through disbelief rather than a simmering intolerance. Penultimate piece ‘TIJ’ is something of an icing on the cake arrangement: collecting together what feels like every trick Mirrored has pulled from its ample sleeve up ‘til this point, the song’s a dazzling, befuddling, mind-bending, perception-altering slice of alternative I don’t know what… just where do you rack an LP that blurs boundaries like watercolour paint on a soggy page, that defies convenient categorisation by being at once everything you want and need in an album and like nothing you’ve ever heard before. It’s otherworldly yet startlingly familiar at times; it echoes the work of forefathers from a wide range of musical hemispheres but augments many a facet from history in a manner that’s entirely unique. As individuals you feel these men, these musicians, are nothing particularly special, footnotes in modern music’s evolution; what they’re capable of creating together, though, is nothing short of peerless.

Now a dilemma dawns: where do Battles go from here? The bar’s been set at such a height that it’ll be a miracle if Mirrored’s makers themselves will clear it with ease a year or two from now. That, though, is speculation and contemplation for a different day; in the here and now, Battles are making an office full of grown men dance like six-year-old bridesmaids at a wedding reception, to Yazoo or Men At Work or something. And the last thing we want to do is stop, frankly. We’ll be here ‘til the fizzy pop rush dies, which ain’t any time soon…