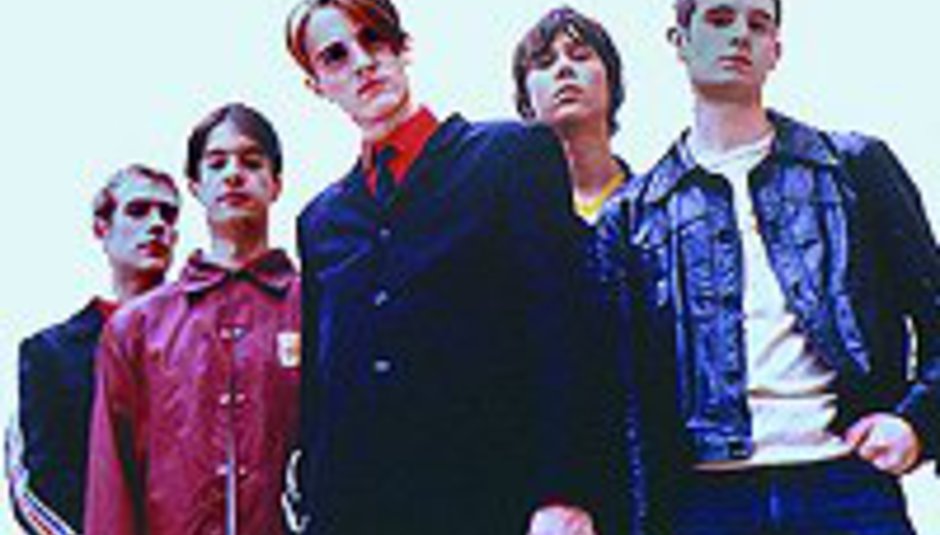 Oh, what a lovely day to drink some English tea: Britpop in 2005

Oh, what a lovely day to drink some English tea: Britpop in 2005

It’s been less than two years since John Harris’ most excellent ‘The Last Party’ documented a certain period in music, roughly 1993-97, when British bands decided to give a jolly good kick in the teeth of grunge. For a while, it looked like we might take over the world. Of course this never happened and bands like Elastica were too caught up in their world of healthy advances and unhealthy addictions, imploding after two albums before their potential was fully realised. Sound familiar?

With worryingly increasing frequency, the word ‘Britpop’ has been spotted again in the music press and the broadsheets. More often than not it’s thrown at a certain Leeds combo calling themselves Kaiser Chiefs. They are, however, not alone. What’s going on now and has been since the break between The Strokes’ ‘Is This It?’ and whatever their second album was called is far more scary.

We are experiencing some kind of weird Britpop-meets-New Wave Of New Wave hybrid. The Camden Crawl is back. S*M*A*S*H and Silver Sun are back. And round the country there are hundreds of little These Animal Mens popping up like The Paddingtons and The Others. Why, only a week ago DiS was idly flicking through some publication or other and we chanced upon somebody saying the latter band’s ’This Is For The Poor’ anthem was the new ‘Common People’ (Pulp, 1995). There are similarities, for sure, but on ‘Common People’, Jarvis Cocker really didn’t want to be common. ‘Common People’ knew there was nothing to be particularly proud of if you live in a slum; like the mighty Graham Coxon shyly uttered on Frank Skinner’s chat show last year when quizzed about their days studying at Goldsmiths, “there’s nothing glamorous about being thrown out of a squat in New Cross.” ‘This Is For The Poor’ celebrates being poor, which is surely nothing to be celebrated. ‘This Is For The Poor’ is the anti-‘Common People’.

The vast majority of the original ‘90s Britpoppers, at least when they started, wanted to be The Smiths. Most obviously, these were Echobelly, Shed 7, Marion, Suede and Gene. These days bands STILL want to be The Smiths (The Killers aren’t British but with their Shed 7-with-keyboards style, they may as well be), but the influence of the last 10 years is too obvious to ignore. DiS thought it best to provide a cut-out-and-keep guide to 15 current bands, which is by no means exhaustive. If you DO need to cut it out we advise printing it off rather than taking a pair of scissors to your monitor. If you do, however, prefer the latter method, at least unplug it first and earth yourself. Safety first at home, children.

1. Art Brut
Expected to be no more than a one-hit-novelty, ’Formed A Band’ almost made them the new Me Me Me. But we have ‘clever’ lyrics, the tendency to shout a lot, drunkenness, a sense of heritage which is very, very English (apart from the two Germans. Erm) – all you need to do is replace the fans chanting “top of the pops” with “you fat bastard” and you have the new Carter The Unstoppable Sex Machine.

2. British Sea Power
Misunderstood by many but worshipped by others, they play music which is dark and sometimes unsettling with the shadow of ‘80s indie/C86 ever present. Their more stroppy, po-faced nature shoves them in the direction of The Auteurs.

3. The Departure
Probably would’ve sold their grannies and done anything the A&R men suggested had they not been signed within 28 seconds of forming, few of 2004’s newcomers looked as desperate as the bunch of haircuts here parading as a band. These opportunists look like they’d hump any musical bandwagon going and as much as they’d like to be The Chameleons, they are really the new Thurman.

4. Franz Ferdinand
A little arty, a little on the wrong side of the usual music industry cut-off age of 25, Alex Kapranos has become something of a skinny pin-up. The band have already crossed over into the teen market thanks to mammoth foot-stomping hit ‘Take Me Out’. If their debut album was ‘Different Class’ then the next album will be the ‘misundertood’ one. Or it may sell fuckloads. Whatever. Helped by the fact they absolutely butchered ‘Mis-shapes’ in an early radio session, it may not surprise you to learn that Franz Ferdinand are really Pulp.

5. Help She Can’t Swim
Screeching girl vocals over something lovingly shambolic and tuneful; not quite riot grrl but quite a lotta Sonic Youth, HSCS are loved by a certain DIY in-crowd (we don’t mean grouting) and destined to sell very few records. They are Bis.

6. Kaiser Chiefs
Britpop personified, minus the class-A excess and hatred of America. Kaiser Chiefs have the old-skool dress sense and, most importantly, the tunes. Oh, SO many tunes. Like, LOADS of them. And they’re as kooky as Madness. Like Seymour, what they’ve also done is come out of a cocoon (Parva) but have bypassed ‘Leisure’ and ‘Modern Life Is Rubbish’ and headed straight in the direction of ‘Parklife’. Let’s hope ‘The Great Escape’ is not round the corner quite yet, cos Kaiser Chiefs are Blur. Rejoice!

7. Kasabian
A load of mystical dirge passing itself off as pop and ‘vibes’. The tendency to talk utter bollocks in interviews. The people who like them now realising that, come second album time, they were actually a bit of a joke and pretending they never liked them in the first place. Well done Kasabian, you are the new Kula Shaker.

8. The Libertines
They do bad drugs and openly talk about it. Their fanbase is quite scarily obsessed. Out of everybody mentioned in this article, except perhaps the Kaisers, their music (lest we forget about that) is the most reflective of British ‘70s punk, ‘80s indie and ‘90s plagiarism. The Libertines have an often romantic view of the country they live in (be it England or ‘Albion’) and, at the time when the world was obsessed with NYC, they opened the doors for a whole crop of new bands, be them good or shite. It’s mainly this rather than Bernard Butler producing the Libs’ best single which means, hooray, they are Suede.

9. Oceansize
A mighty live band eventually producing a debut album which can only be described as ‘disappointing’, Oceansize peddle overblown pomp rock and aren’t ashamed of it, which is why we like ‘em. This author can’t be the only one who’s noticed the remarkable similarity of ‘Catalyst’ to ‘Stay Young’ (intro at least), so bravo Oceansize, you are Ultrasound, except not as fat.

10. The Ordinary Boys
They connect with young mod-wannabes, successfully rip off The Jam and don’t appear to have any interest in pushing forward the boundaries of guitar music. But for every boy turned onto ‘Quadrophenia’ after tracing back The Ordinary Boys’ so-called roots, there is a cynical music fan who noticed the band’s swift change in image and got fed up of the street-team badgering. If there’s a country rock album pending then watch out – we may have the new Menswear.

11. The Others
Ugly men brought up on a Noelrock diet – musically and chemically. For all his nasal Gallagher snarling (which usually ends up sounding more like Campag Velocet’s Pete Voss), Dom Masters’ merry bunch of London scenesters come across as little more than one big cliché, musically and lyrically. All this laddish bravado makes them the new Northern Uproar with a more interesting PR angle, while their connection with the fans will eventually backfire like it did on Mansun. Patronising note to teens: please don’t put your life in the hands of a rock ‘n’ roll band.

12. Razorlight
Borrell’s big mouth and God complex has got him more column inches than he could possibly ever want/need. He is essentially a one-man show backed by session musicians. On first impressions they were nothing but more Television wannabes… that was until ‘Golden Touch’ came along and, well, touched a nerve within The British Record Buying Public. Despite the fact or maybe because of most of the lyrics on their/his album are utterly embarrassing, it seems there is no stopping Razorlight’s rapid ascent. Without thinking too hard, can you name Oasis’ current bassist? Can you name Razorlight’s current bassist? Razorlight are Oasis.

13. Selfish Cunt
Ooh, a little bit of controversy and a lot of hype. Selfish Clot is liked by nobody but music journalists – to which The Kids said “fuck off” and which makes him the new Terris.

14. Thee Unstrung
Extremely ladrock and mates with the ‘right’ people, Thee Unstrung are The Libertines with an Oasis fixation. They have an ear for a tune but are just really fucking annoying. Representing a scuffed trainer stomping on the face of POP forever, they are Cast.

15. Young Offenders Institute
A penchant for glam rock and fast tunes, plus a remarkably similar name - congratulations, you are, er, The Young Offenders.

Through all this though, do remember one thing: old Britpoppers don’t die, they just go on to manage bands or write books. One day you too could own a copy of Selfish Cunt’s ‘How I Managed To Stop Saying Naughty Words And Learned To Love Jesus (Aka Johnny Borrell)’.

DiScuss: Where are all the girls? Just who are the new Elastica and the new Me Me Me then (come on, The Chavs is too damn obvious)? Do you bemoan the loss of Melody Maker and Select? Who’s REALLY got the crack? Do you know the initial meetings for the DiS magazine took place in the Good Mixer? Do you realise a lot of this is tongue in cheek?