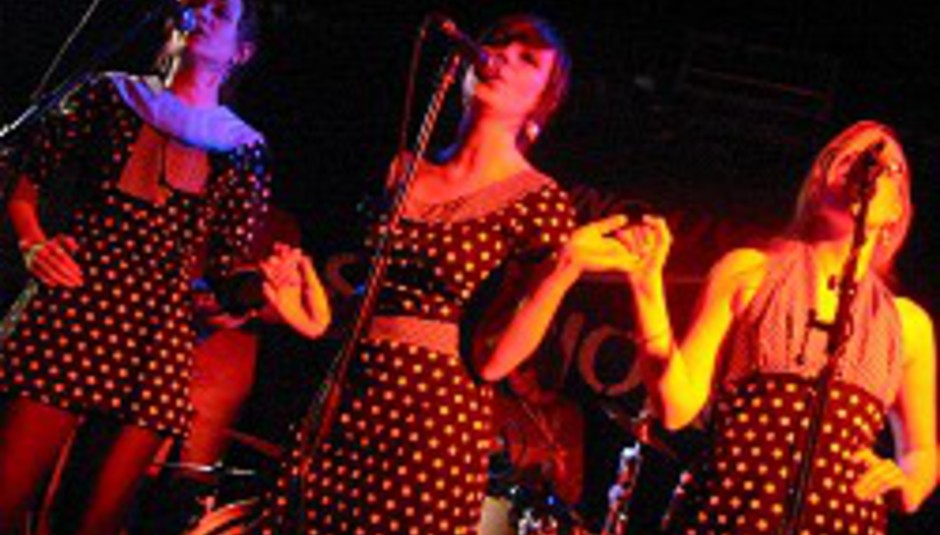 Due to the sudden unexpected breakup of The Souls on Monday night :( we've got a replacement band in the form of Handbags At Dawn, who opened our last all-dayer in December. Blurbs'n'links'n'that below.

But anyway, a far more interesting project was putting together and night of POP! music for our lovely (and less-lovely) DiS readers, and herein lie the details.

The Bands: THE PIPETTES + THE SOULS + CICCONE + TERMITES + THE CUSTOMERS + ACTION PLAN + THE PLAYWRIGHTS

The Skinny: It's an Easter Bank Holiday and we're going to get drunk. Oh yeah, and there's a FREE BBQ (that includes veggie stuff)

THE PIPETTES
They are The Pipettes and they'll drop you in their nets. "They've wasted no time in their mission to turn back the clock to a time before The Beatles ruined everything. Three girls, one tight vocal harmony... it's easy to understand the endless comparisons to The Supremes, The Ronettes and Le Tigre. But there's more to The Pipettes than vogue-athons, doo wop and matching dresses... Abrasive girly pop that should not be missed." - Brighton Live
ONSTAGE AT 11PM
www.thepipettes.co.uk

HANDBAGS AT DAWN
Founded by Dublin-born singer/songwriter Shane Rennick, who moved to London in 2002 to play his ranty folk-punk on the open mic circuit. Now a finely-honed 4-piece band, their demo CD 'The Guantanamo Babes EP' was recorded in March 2004 at Din Studios in London's Docklands, and perfectly captures this young band's edge, bite, and hook-laden tunefulness.
ONSTAGE AT 10PM
www.handbagsatdawn.info

CICCONE
Taking their name from Madonna (and Sonic Youth's short-lived side project), the band's influences come from The Clash, Blondie, Velvet Underground, The Smiths, Lou Reed, Television and 50's rock 'n' roll. Debut album 'Eversholt Street' was recorded and produced entirely in the band's bedroom and is unashamedly British, its honestly pure and spirited, brash and defiant. A perfect blend of punk ferocity with a dark pop sensibility, 'Eversholt Street' approaches issues with a stark yet sussed directness. Ciccone are a fine, intelligent band - sexy, sporadic and subversive.
ONSTAGE AT 9PM
www.ciccone.co.uk

TERMITES
Formed in Bristol, October 2003, Termites harness the powers of the dark arts, crafting psychedelic death pop for the hard of living. "They are having far too much fun; I’m not sure I approve. Song by song, the crowd are sucked forward into a mad world of duelling basses, Wurlitzer piano, reggae grooves, fairground riffs, musical saw, fairy lights, Britpop signatures, mid-song sequence changes, and total exuberance. They have captured joy, along with just about every guitar based genre ever." - The Fly
ONSTAGE AT 8PM
www.terminaltermites.co.uk

THE CUSTOMERS
"Defiantly anti-image, they pride themselves on well-crafted songs and meaningful lyrics. When a band cities early American folk and tragi-comedy as influences you know they’re a cut above your average meat `n’ two veg indie outfit." - Source. "The Customers in how to write an anthem and yet be subtle about it" - DiS. "The Customers lurch between art-rock stools like method actors playing at drunks" - Logo. Another Brighton-based band. We like Brighton, we do.
ONSTAGE AT 7PM
www.thecustomers.co.uk

ACTION PLAN
Action Plan were bored, then they heard the screams of Trail Of Dead and the rants of Interpol and soon they weren't bored anymore. They weren't bored especially when they were playing in front of two people or two hundred, whoever, whenever, with sweat dripping like blood from every pore, playing every song like they'd never enjoy the use of their hands again. "Action Plan blend dark, sinister post-rock with elements of Six By Seven, Manics and Nirvana" - Artrocker
ONSTAGE AT 6PM
www.actionplantheband.co.uk

THE PLAYWRIGHTS
After a six-month sabbatical The Playwrights return to the live arena, warming up for their headline gig at The Marquee, and showcasing tracks from their forthcoming mini-album 'English Self Storage' - a stunning fusion of scratchy punk grooves, post-rock nuance and english folk echoes. "Have we mentioned we fucking LOVE The Playwrights? Those of you who like your post-punk all arty and angular and intellectual and intense ought to visit the Bristol-based brainiacs." - Rolling Stone
ONSTAGE AT 5PM
www.theplaywrights.co.uk

... and the curtain falls to amazing thunderous applause. I think people would flock to see something like that.