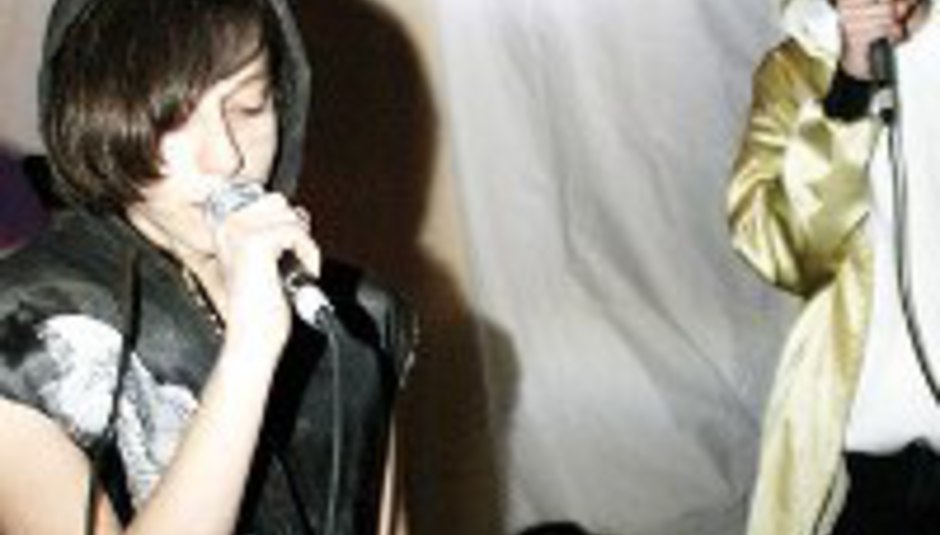 Brooklyn banshees with a brand new beat, Telepathe stand out from the NY district’s vacuum of avant-garde. Though the same stifling pursuits of local noiseniks Gang Gang Dance and Effi Briest remain, a realised pop sensibility now stands to the fore, as harmonies and chants call out with blood-curdling brilliance against their lapping tape loops and darting hooks. Years in the making, Dance Mother, the outfit’s debut full-length, waits in the wings, its makers the latest darlings to be produced by TV On The Radio’s industrious Dave Sitek.

With something of a revolving cast, it’s difficult to plot Telepathe’s makeshift roster. Initially formed in 2004 as an aside for Busy Gangnes (from prog-punk experimentalists Wikkid) and Shahin Motia (no-wave rapscallions Ex-Models), Telepathe (pronounced “TEL-EP-ATH-EE”) have seen core contributors come and go but seem to have finally found some stability with the current crux, with Gangnes, fellow Wikkid and First Nation guitarist Melissa Livaudais and Mirror Mirror’s (US) Ryan Lucero.

After releasing Farewell Forest EP and the ‘Sinister Militia’ 12" through Social Registry last year – records indebted to the usual cast of Brooklyn and Baltimore avant-garde – recent outings ‘I Can’t Stand It’ and ‘Chrome’s On It’, recorded with Don Cabellero’s Eric Emm, suggest that, away from awkward Paw Tracks beatniks and noise-folk dilettantes, Telepathe have a newfound focus as Hot 97 hip-hop and totemic drone experimentalism collide. What records and moments of inspiration made you want to start the band? You seem to identify influences closer to 3-6 Mafia and 8-Ball & MJG than Gang Gang Dance and Animal Collective…

Melissa Livaudais: Honestly, the thing that I listen to the most is the local hip-hop radio station in NYC, Hot 97. I love it, and I have to say that it is the greatest source of inspiration for me, as well as my friend White Williams and his Prophet ‘08 synthesizer. I’m in love with that thing.

How do you feel the act has changed since you formed? Do you think Farewell Forest still shows up your strengths?

ML: I would say that Farewell Forest shows that we were really trying to break out of our Wikkid days, but we had very limited instrumentation at the time… so we did what we could to make something that felt new and challenging to us.

I read somewhere that the direction was going to follow ‘Chrome’s On It’’s pop charms away from previous drone-y pursuits. True?

ML: That is absolutely true, Busy and I are ‘hookers’. That’s what Dave Sitek calls us, in that we are totally into making music with sick hooks. We got bored with making drone music and now we are obsessed with making the catchiest fucking music ever.

How did you come to work with Sitek?

ML: Sitek found us. My bro, Nicky Mao from Effi Briest, played him our music and he really liked it. He offered us an entire month in his studio, so we were like kids in a candy store. That man has the hugest collection of synths and everything. We love him and he is family now to us. Sometimes his wild ideas would make us nervous, but then of course it would turn out incredible. He is from another planet.

What do you think he had brought to your sound, a heightened pop sensibility one would imagine?

ML: Of course, Sitek is a sucker for pop. He took our sound and multiplied it by ten. It sounds so huge… I mean bigger than we could have imagined on our own for our first full record. We learned so much from him. He made room for all of our sounds. He’s really good at creating space, and he’s not afraid to use 100 tracks or more for one song. His production style is full force and maximal.

Pop sensibility is central and we love dance music. I don’t mean just ‘four on the floor’. We love syncopated rhythms. That’s why we love hip-hop so much. We are really trying to take it to the next level of pop. Just a little bit more than ‘new disco’.

The record will be called Dance Mother. We have a song about taking a guy into the woods for a BJ and then killing him. The rest is pretty straightforward, you know. It has serious bass. We put so much love into it.

Would you say it was fair to label you quite spiritual people: the yoga, the trances, the telepathy?

ML: We are very spiritual people, but I don’t want that to be tied into our music or some New Age scene bullshit. If you are not listening for subliminal messages, you won’t find any. Hopefully, though, our songs will put you in a trance and make you wanna dance.

Are there any deeply considered themes to the act?

ML: Crimes and killings, blood, dying and being in love… the usual.

How relevant has the school of Brooklyn avant-garde been on your ascent? (Gang Gang Dance and the Social Registry crew, Effi Briest, Dirty Projectors, et al.)

ML: ‘The Briest’ are our crew. Gang Gang Dance do cool stuff. I have no idea what the Dirty Projectors sound like – I’ve really got to listen to them soon. Are they like a huge band or something? Relevant, I guess, but Brooklyn is really overrun by ‘avant-garde’ dudes. I could walk out of my apartment and throw a stone and hit someone making avant-garde music. (Guffaws)

What role do you play in this glut of inspiration?

ML: I would like to think that our role is to raise the bar. We want to get our minds blown and, in exchange, blow some minds.

What’s been your finest moment so far and what does the future hold for Telepathe?

ML: The moments just get finer and finer. We work very hard and I feel like we have been very lucky for all of the wonderful things that have happened to our band. We’re so grateful for the awesome people we get to collaborate with - including Busy’s mom, who threw down a track on the record - and the awesome bands we get to play with. The future for us is about making many more records and not getting attached to any certain process of music making. We always want a good challenge. We never want to be locked into any certain genre or whatever. We are psyched to go on tour.

Dance Mother is due for release some time this year.