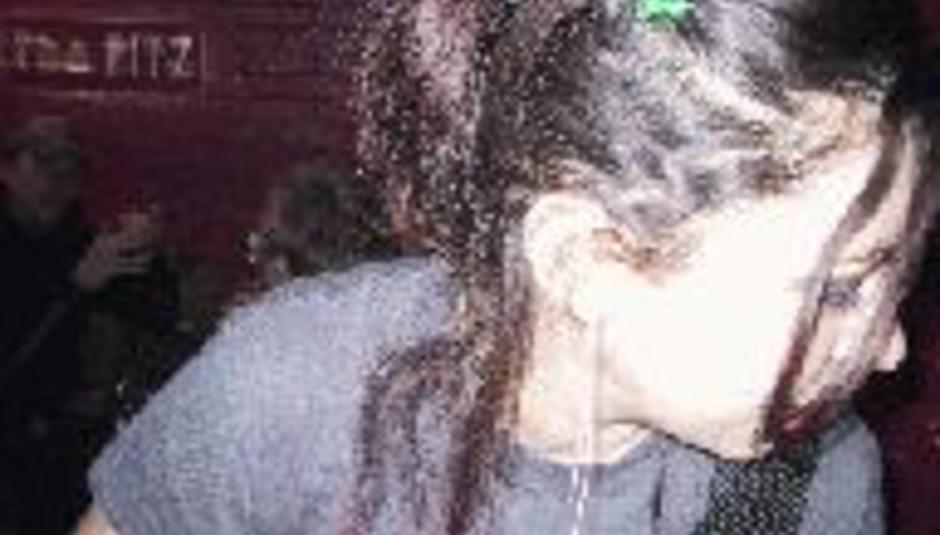 by Mat Hocking March 18th, 2004
Didn’t quite get there in time for All Tomorrow’s Parties tickets? Gutted at the prospect of sitting at home hugging a can of Ice Dragon cider and watching that rubbish new dating programme while your mates are jizzing themselves off over Lightning Bolt, Converge, Isis and Mogwai? Then fret not, for DiS cares about its’ dear readers and wouldn’t want to see them in such a sad state of affairs, oh no. So we’re launching a new club night on March 26th, that will aim to provide, well, an adequate substitute. And unlike ATP, this will happen every month!

That’s right boys and girls, following on from the success of the two DiScore nights in December and January which saw such innovative and wildly disparate acts as Face For Radio, Blowback, The Killerest Expression and Worcestor’s finest camp-core racket The Murder of Rosa Luxemburg strut their crazy-ass stuff onstage things since then got a lot better and we can proudly announce that DiScore will now be happening Upstairs at the Garage, North London every last Friday of the month under the moniker of club NONE MORE ROCK, in association with De-Milo Music.

Indeed, much like the ‘black’ adorning Spinal Tap’s classic ‘Smell The Glove’ album sleeve ‘None More Rock’ does exactly what it says on the tin, showcasing only the best forward-thinking rock outfits on the circuit with guest DJs spinning everything from blistering new hardcore beats to underground ATP-style post-rock to warped electro punk ‘til 3am! That’s a lot of drinking, dancing and flirting to be done.

So then, in much the same style as the aforementioned DiScore nights we’re assembling a package of smart new bands that have been getting us all giddy and excited recently. They are *Drum role please*:

"Trencher make The Locust sound as lightweight as Counting Crows (but with better hair), and a driverless bulldozer crashing through a bus depot full of passengers as graceful as Mozart..." - DiS

THE BIRDS OF PARADISE
"A 100 mph collision between a Converge gig and G.A.Y. at the Astoria... without doubt the greatest unsigned band I have EVER seen." - Do Something Pretty

"These birds live in a world not governed by orthodox chord schemes; by any established forms... You’re working out where they’ll go next – Converge trash or disco pomp? But all the while it is connected by their esoteric minds. This is their paradise and I want to live there!" - DiS

And at the very last minute, stepping into the shoes of Jets vs Sharks who have unfortunately had to pull out due to transport problems, may we have a round of applause for...

SILENT FRONT
"Taking that good ol' Dischord Records formula and melding it with the surging, chaotic melody of Shellac, South London’s Silent Front create the kind of off-focus din that’ll have you fidgeting and squirming 'til you’re up there dancing along and manically shaking your head to their erratic grooves" - DiS

And with guest DJ sets from the über cool Captains of Industry label (Favez, Mínus, Future Ex-Wife) alongside resident DiS DJs Mike Diver (post-ATP) and Chris Owen until 3am this is gonna be one heck of a booty-shakin’, spirit-swiggin’, DJ-hecklin’ rock ‘n’ roll love-fest!

So where is it again?

Upstairs At The Garage
And when? 26th March, then every last Friday of the Month
How much? The bargain price of £5, including 3 bands, and £6 after 11:30pm
What time? 9-2am
Where exactly? Holloway Road, turning left out of Highbury & Islington Tube
Anything else? Yes, we are in talks with a certain head-ache-inducing, rock 'n' roll drinks company to provide some suitably rocking giveaways, so watch this space!