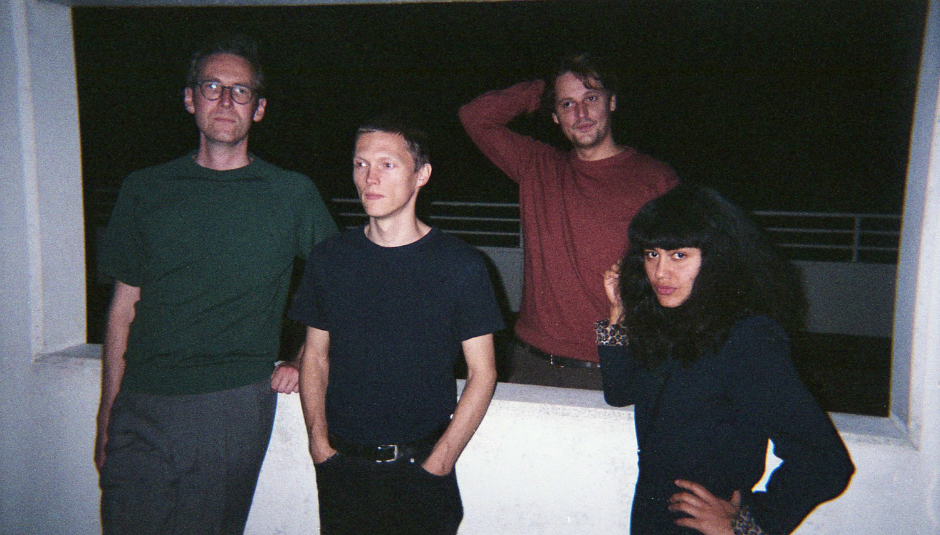 For the romantic soul, it takes at least a few years to get fully acquainted with Rotterdam’s iconoclast ethos. The Dutch port city is the natural habitat of enfant terrible city sculptor Joep van Lieshout, shoestring pop absurdist Harry Merry, and beat-provocateur Jules Deelder, the type of mavericks who remain unperturbed by the whims of overwhelming change. By skulking and grubbing within the city’s inner cracks, they have come to define its very shape. Between the lush boutique shops and furbished food places, a joint like Café Timmer likewise sits proudly like a century-old anachronism: a safe house where the poets and authors congregate.

Lewsberg tap into that clandestine spirit like few bands do these days. The group’s sound recalls the likes of The Velvet Underground, Galaxie 500 and Television, albeit not in a way that gives the impression of a mere facsimile. Like other notable Rotterdam peers (rabid post-punks Rats on Rafts and noise-rock revisionists The Sweet Release Of Death come to mind), the foursome of Arie van Vliet, Michiel Klein, Shalita Dietrich, and Dico Kruijsse remains confidently – and comfortably – self-contained within their own creative parameters.

“It started with a conundrum”, Van Vliet deadpans with a distinctively wooden Dutch accent on ‘Non-Fiction Writer’, “He said: ‘It was light at night and dark during the days”. The song illustrates the defeatist tale of a writer protagonist trying to coax a female companion at a bar with faux-profound platitudes. In some ways it’s quite hilarious, because Van Vliet doesn’t add any smarm to this rather pathetic episode, opting to pragmatically narrate from the bird’s eye view. “The song doesn’t judge anyone,” Van Vliet comments. “It pretty much describes what happens word for word. But it is strange, isn’t it, to do all that creative unpacking just for the right to brag about it in a bar full of strangers? The true writers don’t write for those reasons, they do it because they have an urge to do it.”

Van Vliet is referring to homegrown auteurs like Cornelis Vaandrager, Frans Vogel, and Robert Loesberg – Lewsberg is, in fact, named after the latter. What do these writers and poets have in common? For one, they all tap into misanthropic, nihilistic, and disillusioned sentiments with raging abandon, and logically, their work has been met with divisive responses. Loesberg’s career, in particular, didn’t exactly unfold in prophecies of fame and accolades – he tragically fizzled out in obscurity, eventually dying prematurely in 1990 at the age of 46. But after his death, Loesberg remained somewhat of a cult figure locally: in 2012, a Dutch publisher called Lebowski unearthed and reissued his book Enige Defecten, which translates to English as ‘Some Defects’.

Speaking of defects: a season prior, Van Vliet suffered a skull fracture during the storm at Belgium’s Pukkelpop festival. Having to decompress and rehabilitate, he decided to pick up a book again after a ten-year reading hiatus: you guessed it, that book was Enige Defecten. Though he detached himself from Loesberg’s fiery reprimand, he found the no holds barred candidness of his work rather refreshing. In the years that followed, Van Vliet sporadically started accumulating musical ideas, without really knowing what to do with them. “But I didn’t want to ditch them. So I gave them to Michiel, who had some detachment from them and a whole other way of approaching music period, and he turned those old ideas into new ideas.”

Guitarist/sound artist Michiel Klein is another familiar face within the Rotterdam underground, though his scope of interest couldn’t be more different musically. Van Vliet performed regularly with song-based eccentrics like Boring Pop and Naive Set, whereas Klein immersed himself in more experimental, noisier outfits such as Sweat Tongue, his joint project with Red Brut’s Marijn Verbiesen. Even in their appearance, the duo are opposites: Van Vliet has the whole bookish, William S. Burroughs-aura down to a tee, whereas Klein’s boyish, heart-shaped face, mellow attitude, and oversized sweater give the impression of someone who’d be totally content living off the grid.

They bonded over one very particular thing, however: Dutch literature. “The first book we found common ground in was Gerard Reve’s De taal der liefde (The Language Of Love)”, Van Vliet recalls. “It basically reads like a bunch of written letters, so doesn’t necessarily pose as a piece of literature. But because it’s a book, it becomes that very thing. And the more bleak reflections – well it’s a serious book, but not without its lighter parts.” Klein explains the book is basically a correspondence between Reve and his ‘soul brother’ Simon Carmiggelt – with only Reve’s side of the conversation revealed, leaving a lot of gaps to fill. “There’s no big narrative thread, it’s all very off-the-cuff,” he explains matter-of-factly. “That understatedness is something that attracted us both. That things aren’t necessarily connected in this super profound way.”

Lewsberg manifested, accordingly, in likewise understated fashion. ‘Chances’ was one of the first tracks to materialize; it’s emblematic of Lewsberg’s ability to reduce romanticism to dime-store verisimilitude. Van Vliet’s quick-fire allusions to sexual intercourse are decisively and deliberately unsexy and frugal, while Klein’s frantic noise bursts seem to indicate that the act itself was indeed as forgettable as the lyrics suggest. And just as the band seems to ride it out in style, the whole thing falls flat on its face.

Indeed, there’s a lot of emptiness on Lewsberg’s self-titled debut LP, which in turn invites a lot of loose interpretations. ‘Chances’, like some of the other tracks, bleeds into a repetitive organ loop with snippets of conversation between Cornelis Vaandrager and Frans Vogel played over it. Even for Dutch people, it’s hard to make out what they say, but it basically boils down to a casual exchange, not some kind of profound revelation. Van Vliet explains the reason for handpicking these recordings dispassionately. “You can hear writers and poets gathering and talking, but at the same time, it’s a very commonplace interaction. So the line between every day and rare occurrences starts to disappear. I think that’s more beautiful than someone presenting this very particular message forcefully.”

Unlike many rock outfits, Lewsberg isn’t a band looking to blow you away on stage. I remember an occurrence when one light engineer went a little too Bon Jovi on the band; Van Vliet politely requested the lighting be stationary and dim. By remaining remote and stoic, Lewsberg is practically daring the audience to an ultimatum: you either walk away or listen attentively. It’s like they are perfect strangers. Even bassist Shalita Dietrich, by far the most outwardly charismatic member of the band, seems to sashay with the same solitary melancholy as Audrey’s infamous Twin Peaks dance.

Indeed, Lewsberg’s sum of its parts doesn’t really make any sense, and as you spiral in this confused, unguarded state, the band’s more subdued slowcore-ish segments of ‘ Carried Away’ and ‘Non-Fiction Writer’ furtively trickle down your subconsciousness. Being lulled into this strange phlegm gives tracks like ‘The Smile’ – which winds up with mounting intensity like a ticking timebomb – a window to leave their desired mark. Of course, Lewsberg remains circumspect to outwardly ‘perform’ the songs, which is precisely the point. And its what makes them such a fascinating flummoxing band to watch.

Klein, always choosing his words with measured precision, rubs his chin at the notion that a lack of outward expression equals not giving a damn. “For me, it’s different anyway because I don’t work with words. With written language, you can make feelings binary and concrete. But with music, it always works differently. When people notice me playing a certain noisy guitar-based piece with a straight face, they can’t tell what’s going on in my head. If you don’t express some sort of theatrical mimicry that a song asks, if you choose not to express that outwardly: why does that mean you don’t feel that way? That’s a strange assumption when you think about it. We’ve just gotten so used to artists doing that in pop music. But personally, I don’t think that’s required.”

“Music as a personal outlet really isn’t all that interesting”, Van Vliet adds. “Sure, I can imagine that people need to read books or poems to give meaning to their personal feelings, but I don’t think it’s imperative to share that with other people per se.” The fact that the listener can’t tell is exactly what inspires his own deliberately prosaic lyricism. “That’s the great thing about many of the Rotterdam-based writers and poets like Frans Vogel, Cor Vaandrager, Hans Sleutelaar: they’ve all worked in copywriting and advertising. This helped them look at the world from a certain cynical perspective: one that kills the mysticism makes things very concrete.”

Van Vliet closes the interview with a rebuttal that leaves this particular non-fiction writer in a conundrum of his own: “The question of whether the thing you do is genuine or not, you can erase that altogether. Because a piece of heartfelt poetry and an advertising slogan can evoke the exact same thing. In the end, it doesn’t matter whether it’s genuine or not. It’s just language written by someone and read by someone.”

Lewsberg is out now via Cargo Records. For more information about Lewsberg, including forthcoming tour dates, please visit their official website.