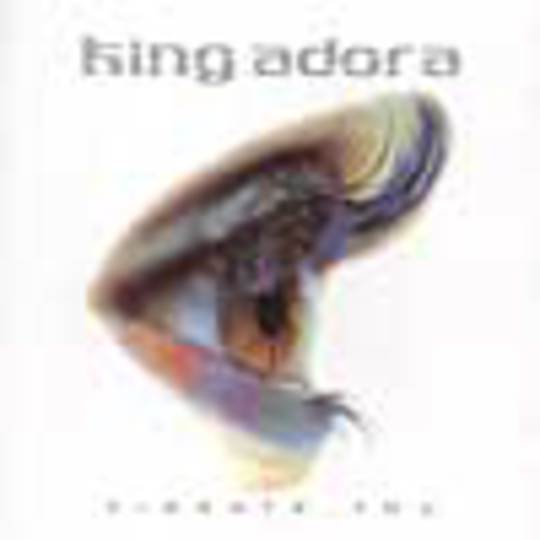 King Adora have a reputation. And they love it.

We’re lucky enough to be provided with a video to show us their target audience: frisky, glitter drenched, not quite good looking young teens. I kinda get the impression that these are the people that are annoyed that they missed out on The Manics being sexy and are trying to find some sort of substitute for those, pre-pork pie, days.

I liked King Adora. After hearing this I can’t decide whether or not I still do. Half of this album has been released before as singles and b-sides, and they are mainly good, poppy songs that get droves of 14 year olds in fairy wings bopping away. Sure they are far from masterpieces but you can’t call them crap cos they are so damn catchy. The thing about being catchy is that you know the words. And then you realise why some of the other tracks weren’t released individually.

’Asthmatic’ is a song about necrophilia. Or at the very least dual-erotic asphyxiation. I’m not joking: "asphyxiate my heart / I just don’t know / how you do it / asthmatics do it / asthmatics til the end". Actually ’Suffocate’ is as well kinda, but that manages to be more sweet and lovely, if its possible to be sweet and lovely about such a thing, so I don’t mind. So much.

Okay, so this reputation thing they have. Lots of people spit and curse at them, cos shagging under-aged girls is illegal, but that’s not what riffles me about them. It’s how those kids think they regarded highly by the band. ’Whether’ is trying to persuade the kid they shag that they’re serious. It’s the lyrics and the tone. It says to me "Hey kid, dye yer hair and suck me off and I’ll love you for it". If you ever meet the fans that they’ve fucked you know that that’s the kinda thing they put across, cos they believe they’re so special and loved. you just want to grab them by the collar and shout "No dear you just were statutorily raped by a minger!". And, to me, ’Music Takes You’ just about describes them perfectly _"Put your skinny arms around me / steal me while I’m young /and vulnerable /take it slow / let the music find you / have a go / go and lose it / one last time / really I’ve become/ a great escape for your children". A guitar and an eyeliner can make anyone desirable.

The best thing about this album has to be the value for money. 14 tracks, albeit in under only 40 minutes, plus the videos for the singles already released and a montage of live and in-studio footage. But if you’ve already bought the singles there doesn’t seem to be much reason to save up your pocket money for this. They’ll have to write a few more funcatchypop songs sooner or later, just maybe they should’ve waited til they did before making an album.