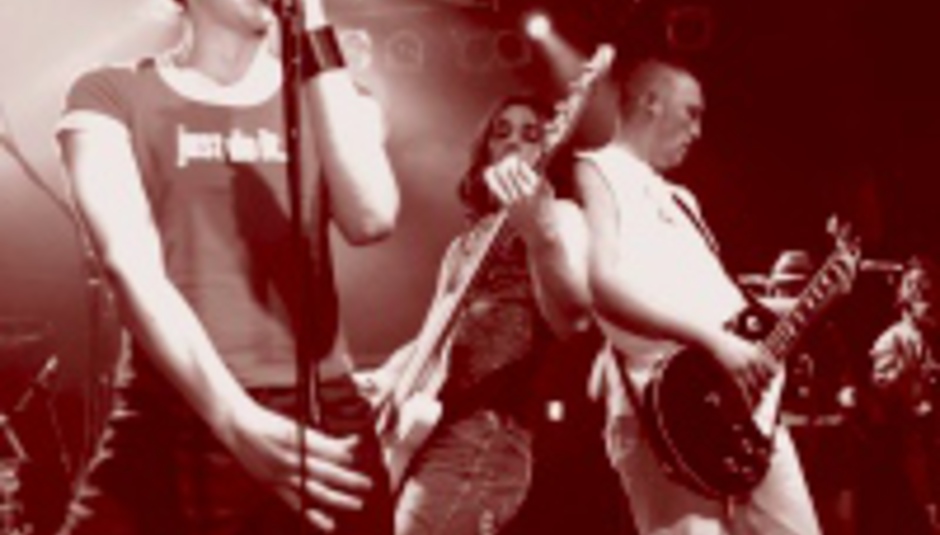 by Sean Adams October 4th, 2004
DiS is four. We’re having a party, it’s not political, but we ask that you ask not what DiS has done for you, ask what you’ve done for your culture…

Four years have blown by and DiS would like to thank everyone for reading, writing, posting, sharing and being involved. Without you folks there is no point to what we do. And what we do (if it wasn’t clear) is all that we can for the music we love. Yeah, our resources are limited, our ideals often flawed but four years ago no-one was doing what we were bloody-mindedly doing.

So in four years we’ve evolved and like cats’n’window-panes, we’ve learnt our lessons. We accept we’re far from perfect. There’s still so much more we could be doing, but things are starting to develop at the moment. We’ve got an office for starters and the editorship of the site has been passed over to Gareth Dobson. Now, 30,000 or so folks log into DiS every month and we’re racking up an impressive over 2million page impressions a month too, because of this, we’re starting see some opportunities wander our way to do more and expand. But that’s just boring stuff because DiS can continue to run on good will forever more. But the key thing for our fifth year will be to have a serious faultless set-up so that every email gets a reply, that our profiles are extensive and up-to-date, that our listings become definitive, recommendations flawless, user area easier to use, that our news is the most on-it music news source on the web and that our abilities to find, champion and introduce new music to the world are unrivalled. We also want to become more visual with more photos and vids. Have even more downloads. Turn our ratings/recommendations system into phase two. And so much more…

The main changes you’ll be seeing over the next few months is DiS being much less UK-centric (and a billion times less London-centric!) and tackling the WORLDWIDE web in the way it can only truly be approached. We not only want to cover the global music scene, but allow music fans around the world to unite. International music scenes are so similar yet so varied and we believe that the internet should be liberating opinionated fans, bands, collectives, promoters, everyone who’s trying to do their bit for the music they love, from all around the globe!

Having said all that, please use the comments board below to leave any of your problems, questions and suggestions for the site.

We’re celebrating four years of Drowned in Sound in the best way possible, with a party and some shows from some of the finest new bands in the country throughout the month of October (formerly known as Rocktober, but we had too many complaints!). Apologies for the London-centricity of this, but it is where a lotta our crew live…

FRIDAY 8th October
@ The Marquee, No.1 Leicester Sq
Drowned in Sound & Plum Promotions Present…
DiS 4th Anniversary: Free Party, Marquee Launch Week
Doors: 7:30pm
SPECIAL GUESTS : To be announced on DrownedinSound.com on October 7th.
DO ME BAD THINGS : Quite possibly the most exciting new band in the country right now. They formed on St. Valentines Day 2003. There’s a stage-filling nine members, with eight possible vocalists. Their list of influences is longer than their rehearsal attendance sheet, mixing Queens Of The Stone Age with Rufus Wainwright, Jon Spencer Blues Explosion with Jellyfish, Steely Dan with Monster Magnet, Turbonegro with Randy Newman... ok, you get the point. They release new single 'Time For Deliverance' through Must Destroy Music/Atlantic Records on October 25. This is the band's second single, following up their dis single of the week debut, 'This Song Rides'.
domewebthings.com / mustdestroymusic.com
DEAD! DEAD! DEAD! : So hot right now band from Southampton! We said "Think of a more likeable Coral fused with Joy Division" and Logo said "True music.. dark, beautiful, melodic harmonies... hard to define... an aura of refreshing style... they'll soon be shuffling into the fast lane. How can they not?". Big things beckon…?
deaddeaddead.co.uk
PEACE BURIAL AT SEA : Gordies, like spiritual Stateside cousins …And You Will Know Us By The Trail Of Dead or Slint, Peace Burial At Sea exist on the periphery – of sound, of society, of the imagination. The ghost of cocaine Bowie lingers in their paranoid post-cyber punk, art-dub debut opus ’This Is Such A Quiet Town’ (out now on Captains of Industry), as do Spaceman 3, The Aphex Twin, PiL, Mogwai. The overall effect is like 2001: A Space Odyssey as scored by Ian Curtis, or maybe a post-hardcore ‘Ziggy Stardust’ or…or…or…
peaceburialatsea.co.uk / captainsof.com.
+ DJS: Indie Alumni Special Guests, Pryhha Girls, Drowned in Sound +More!

Plus we're partying through 'til the end of the month (apologies again that these are all in London), including:
Tues 12th Oct @ The Garage: thisGIRL + The Blueprint + Engerica + Days of Worth.
Tues 12th Oct @ White Heat, Infinity: Murder of Rosa Luxemburg + Redjetson + Birds of Paradise
Tues 19th Oct @ Water Rats: DiS Djs @ Whyte Seeds single launch + Dustins Bar Mitzvah + Vincent Vincent & The Villians

Now, all we've gotta do is get sponsored by Jack Daniels and it'll be a near perfect/cheaper year.