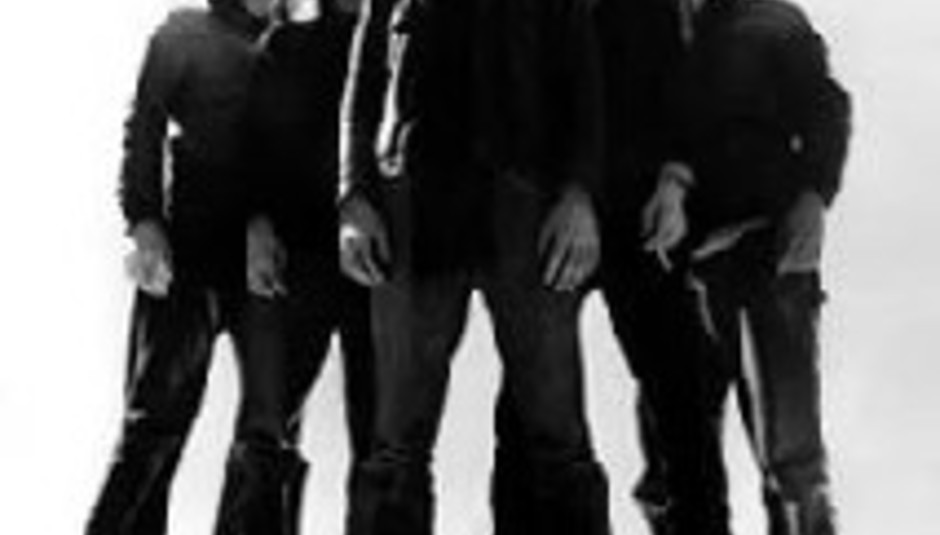 “If letting ‘The O.C.’ use one of our songs amounts to prostitution then that must make us pimps..."

“If letting ‘The O.C.’ use one of our songs amounts to prostitution then that must make us pimps..."

by Dom Gourlay February 16th, 2005
While most of us spent the festive period eating, drinking and falling over, New York five-piece Ambulance Ltd were gearing themselves up for a largely intensive opening to 2005.

Having raised a few eyebrows while supporting the likes of Guided By Voices and The Killers last year, Ambulance Ltd – and it is L-T-D as opposed to “Limited” - haven’t had time to slow down and relax. Instead, they’re about halfway through their biggest European tour to date (with The Dears) and March 1st finally sees the UK release of their eponymously-titled debut long player.

Formed initially in the summer of 2000 by guitar-playing singer/songwriter Marcus Congleton and Belfast-born drummer Darren Beckett, they were soon joined by bassist Matt Dublin and guitarist Ben Lysaght within the space of a year before expanding to the current five-piece line-up last year with the addition of keyboard player Andrew Haskell.

Musically Ambulance Ltd share similar experimental parameters to those of a latter day My Bloody Valentine whilst eschewing the same feeling of warmth Teenage Fanclub generated with their early masterpiece ‘A Catholic Education’. Certainly it would be fair to say that Ambulance Ltd have probably created a bigger stir in the UK than in their home city.

“I can definitely see how people’s opinions of us have changed from the last time we were over here,” states Marcus Congleton with an air of deadpan nonchalance. “Before we were the unknown opening act and people were like, “Yeah, entertain us!” but now the album’s been available on import for some time and people are actually singing along to the songs.”

“I think we started to break through when the single (‘Heavy Lifting’) came out in December to be honest,” adds drummer Darren Beckett.

Along with the more fortuitous influences mentioned earlier, Ambulance Ltd also share a love of the classic songwriting of people like Neil Young along with the revolutionary rock’n’soul of Booker T And The MGs and rebel rousing dramatics of Jim Morrison and the Doors, resultantly ensuring the band’s sound template is even harder to categorise than most.

“We don’t really think about it that much. I mean, we try to write songs that sound different from each other but, at the same time, share the same thread of quality. We do take inspiration from so many different sources but there’s no real area of music that we know of to describe where we’re trying to go with it,” declares the studious looking singer/guitarist.

“Its not a conscious thing. We try to play pretty simply and build a songwriting perspective out of it. We’re not into jamming or practising solo instrumental breaks or anything like that, although we do improvise a lot,” summarises the softly spoken Beckett.

Although they’re based in New York, it would be fair to say that Ambulance Ltd don’t really fit the stereotypical image associated with bands from that scene, particularly in the wake of The Strokes et al. Marcus Congleton offers a different viewpoint.

“Some bands who we share a lot of influences and ideas with are probably not known over here yet. Most of the bands who are known in the UK I would agree we have little in common with, although I do like a lot of those bands. I think living in New York there are so many different scenes within the big scene, and me and most of my friends would be listening to similar stuff and no doubt the like of Interpol and their friends would be listening to the same stuff so…at the moment a lot of British bands are doing well in the States – Franz Ferdinand for example – and their influence is already starting to show through in several up-and-coming bands’ sound.”

Certainly the role reversal between British and American bands has turned full circle, with less and less artists from this side of the pond trying to sound like their Stateside cousins while more US groups seem unafraid to display their distinctly English reference points. So would Ambulance Ltd ever consider the next step and re-locate to the UK, say London, on a more permanent basis?

“I don’t think that would be really necessary,” decides Congleton, assertively. “People can still buy our records all over the world no matter where we’re based. We actually spent some time recording in London last year and, while we had a good time, we couldn’t wait to get back home.”
“I think we all like living in New York” adds Beckett reassuringly.
“I don’t like the idea of anyone moving to a specific place to try and draw from its’ musical influences,” continues singer/songwriter Congleton unabated.

And they’ve had one of their song’s (‘Primitive’) used on American teen drama “The O.C.”.

Marcus: “We needed that, we really needed that. These days, if you don’t get your songs played on TV or in movies the chances are you’ll never get heard and therefore you won’t survive.”
Darren: “There’s such a TV culture now that we needed that album (‘The O.C.’ soundtrack) to get our music heard by a bigger cross section of people.”
Marcus: “If letting ‘The O.C.’ use one of our songs amounts to prostitution then that must make us pimps.”

Their self-titled debut album has been available in the States since March of last year, yet until now hasn’t been released over here. Marcus Congleton takes up the story.

“It was a case of red tape on the part of the record label, TVT. They didn’t have any offices in England – outside of New York even…”
“...and they didn’t wanna give it to somebody else” intones Darren Beckett, “so we had to release it in the States and just bide our time until they (TVT) got themselves set up in Europe.”

Now that the album will finally be making an appearance in UK record stores next month, both Marcus Congleton and Darren Beckett seem relieved more than anything that their songs – some of which date back to their inaugural conception – will at least be heard en masse.

“We’ve recorded so many songs over the last few years that we lost count a while back just how many we had!” admits Marcus, part rueful but thoroughly relieved to reach the end of the process.
“The thing is, there are some of those songs that didn’t make the album that we NEVER want to hear again!” declares drummer Beckett, a little overwhelmed perhaps at the thought the band’s record label (TVT) may consider salvaging and releasing several of the band’s - for want of a better word – “lost” studio meanderings as future b-sides.
“They see it as losing part of their investment if the songs remain unheard” Beckett adds, wryly.

Nevertheless, the band’s almost residential studio experiences have unleashed a demon within them that one day they may be able to rival the likes of Kevin Shields in terms of mastering new techniques in sonic experimentation.

“We’re all quite open to the idea of developing a range of weird and wonderful sounds in the future,” admits Beckett.
“When we were recording the album we were working with a young producer by the name of Barney, and he had a lot of novel ideas which you can hear on the record…” adds Congleton.
“…and I think that’s where Ambulance Ltd see themselves heading in the future. We don’t want to just go in to the studio and record rehashed versions of the first record. Everything is about pushing yourselves to the limit and by introducing brand new elements to the band’s side we feel we’re always looking to do that,” declares Darren Beckett as a matter of intent.

So finally, the name, Ambulance L.T.D. Why the emphasis on the finale rather than the main “object” if you like?

“There were so many other bands called Ambulance that we had to make ours that bit different,” admits Congleton, “so many potential lawsuits…”
“…we’ve had other artists’ solicitors writing to us saying they have legal rights to the name,” adds Beckett, “some Brooklyn based band called Ambulance – they threatened to have us beaten up!”
“…and there’s one here too…well in Dublin anyway…Crispy Ambulance” throws in the singer, increasingly weary at talking about something so trivial as naming their band yet something that has obviously caused so much stress at the same time.

And there it ends, as Marcus Congleton and Darren Beckett trundle off to join their band mates at the soundcheck before this evening's performance. However, with a headline tour of the UK planned for May, its fair to say Ambulance Ltd have no intention of slamming down the brake pedals just yet.