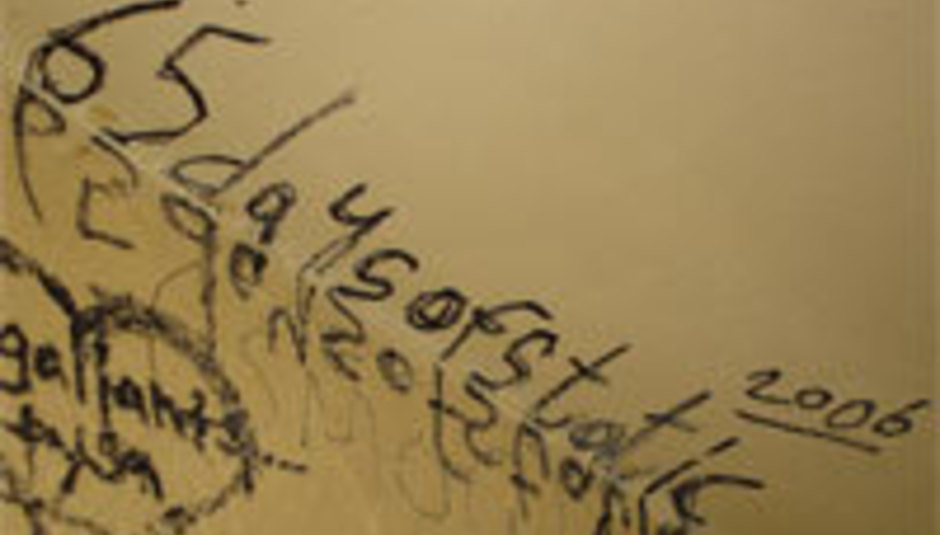 65daysofstatic ...Then We Take Japan (Part One)

65daysofstatic ...Then We Take Japan (Part One)

This is something we wrote about going to play in Japan for the first time. 65daysofstatic is a small band that you probably haven't heard about who have been making records together for 3 years. Once, we quoted the film Almost Famous to a journalist in an interview."Just make us look cool!"

She didn't get the reference and ended her article with 65daysofstatic saying "Just make us look cool", this time without an exclamation mark because she thought we meant it.

Touring becomes another reflex in the end. A dirty habit. Dirty, because in the process of rolling through or flying to the 8 or 9 different countries we made it to this year, we consumed a healthy portion of corporate beer and aspartame-laced soft drinks that fund government-knows-what, and a vast amount of petrol, aviation fuel and high grade motor oil to keep our chosen modes of transport running. A habit because the more you tour, the more you want to tour, and you know you'll never have to go back to the empty rooms where you live, where nothing's any good anymore, if you can just keep going.

This year was a big year in touring for 65daysofstatic. We played most of Western Europe for the first time ever, driving through most of it, flying to some of it. We shared stages with some of our most idolised heroes, and played to audiences of sizes we never thought possible for some band from the bedrooms and abandoned industrial rehearsal spaces of Northern England. But Japan was the big one. Not more important. We just never thought we'd get that far, and in the name of making music.

So we arrive at Narita Airport, Tokyo at 8am, responsible for another 9822kg of carbon emissions, with a crew full of gin and 24 hours of BEING AWAKE in tow, on the cusp of the anniversary of the end of the second world war, and bang in the middle of the Buddhist Festival of the Dead. A big week in the Tokyo calendar.

Immediately on getting out of the airport, we begin to experience the beginning of what would become a near constant slew of things strange and alien to us, both in terms of being in Japan, and in terms of our previous experiences of playing shows. For a start, you don't get a private coach to take you to the venue at the places we usually play. That first day (production day at the festival) becomes hallucinogenic, and there's not a lot we could tell you that makes sense. Here's some of it. The stage in Tokyo we are to play on in two days time is bigger than several of Neil Buchanan's more ambitious Art Attacks put together. The festival catering is like a fucking supermarket. The hotel is more expensive than anywhere we've ever been. It's 40 stories high. Looking out of a room on the 33rd floor, you can see skyscrapers stretching to the horizon line. Later that night, drunk on beer and heat, Tokyo becomes Bladerunner from the bar on the 40th floor, a vision of a future where all the buildings have flashing red lights and the sky is made of neon, there's a typhoon blowing in and presumably, we're out of oil? We saw it. It's like the Matrix. Tokyo's crowded.

The toilets are automated. The heat is incredible. There are huge moths in the trees that sound like screaming cats, but a little more weird. We tried to sleep. We slept? We opened our eyes and it was morning again, anyway.

The Summersonic festival runs every year in Tokyo and Osaka, with a line-up that swaps nights, a little like Reading and Leeds in England (except nothing like Reading and Leeds. Firstly, they recycle a lot of the waste produced by the festival over there. Secondly, they don't hire in cheap Eastern European labour at £2 an hour to pick up rubbish). 180,000 people attend both sites respectively. We have no idea how we got onto the bill of a festival this size; it's possible someone really good pulled out. Or they might actually like us in Japan. Or someone blackmailed someone.

The morning of the production day we get to work on the hired backline, our new monitor engineer Tom and the ever-present Avalon Gold, who does our front of house sound, get to work on what must be one of the larger PAs they've worked with. Tom's spent the beginning of the summer touring and running a solar-powered PA system in schools and colleges and festivals and stuff, the first of its kind, all in the name of educating people about sustainable energy, but he can't seem to work out a way to link this rig up to the sun. One point twenty one gigawatts!

Ozzy's our guitar tech and he seems perfectly at home surrounded by guitars and cabs. The Black Spider, our manager, is probably off gently explaining to someone that if they don't get a power source for the computer ASAP then he might have to take them outside for a chat. (He actually means a chat. He's not a violent man).

That afternoon we met our record labels for the first time, an experience only really made possible by Sawaka, our translator for the weekend, who is fast becoming our greatest ally. They’ve had fans made up (those kind you wave in your faces to cool you down) with our faces on. It is humbling to meet yet more people, this time thousands of miles around the world, who believe in music as much as we do and make it possible for us to do this.

Later on we saw a dog dyed neon pink. We were more excited than semi-grown men ought to be. Afterwards, when we'd thought about it properly, we were a bit sad.

A couple of weeks ago prior to being in Japan we played the Dour festival in Belgium to 3000 people. That was easily the most people we'd ever stood in front of and played music to. So when we walk out in front of 10,000 people at 12:30 on Saturday afternoon, the whole thing got a little intense. For us it was one of those shows we can't really talk about articulately. It was mind-blowing. We can only hope all the people out there past the lights and MTV cameras enjoyed it as much as we did. They seemed to.

A little later, we got our first real taste of industry schmooze in the Artist Hospitality hall, where we were hurried from sofa to sofa, TV camera to TV camera, in a kind of music-channel dance, ending in the four of us standing slightly bewildered at the side of the room, clutching our complimentary MTV towels and drinks, that we accepted graciously, although with forced enthusiasm. A little spaced out from the photo-flash and a little ink-stained from autographing various t-shirts, polaroids, watching Avenged Sevenfold or Nick Oliveri or Plan B or Stonesour going through the same interviews, that old sinking feeling came over us that we were at another one of those parties we shouldn't really have been invited to, where we didn't quite understand the etiquette, and although we'd said what we wanted to say into the camera, although we'd represented ourselves fully, and with dignity, we weren't really made to move in those kind of circles. We're not really social climbers.

Put 65daysofstatic on a stage and they know what they're at, and why they're there, and who it's for. Put us in a room that the attention of the world’s homogenised entertainment industry (that would be MTV) is resting on, then your audience and your motives get a little further away. It becomes less clear who you're actually benefiting. It feels like an exercise in self-love rather than self-belief, and it tastes a little sour. Being rather more versed in the art of self-effacement, we left them to it.

Or rather, we were flown to Osaka. We got drunk and had some laughs. Then we slept.