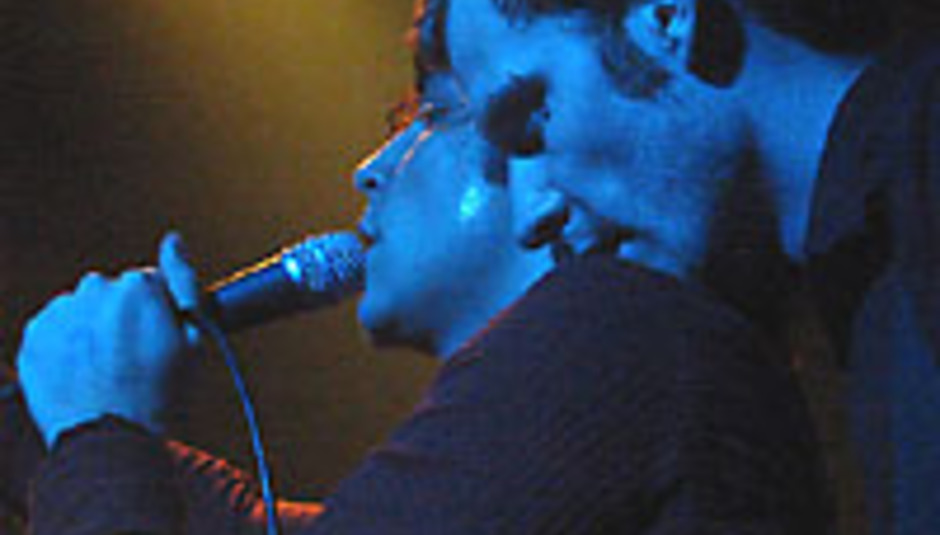 by [redacted] June 16th, 2005
Hullo. Apartment were jolly spiffing the Garage, don't you think? Well now you can see them ALL OVER AGAIN in a considerably smaller venue, along with other hot! beat! combos!

The Venue: The Windmill, London

The Cost: ADVANCE TICKETS SOLD OUT: LIMITED TICKETS ON THE DOOR

The Bands: APARTMENT + ARCHITECTURE IN HELSINKI + LES INCOMPETENTS + THE PATTY WINTERS SHOW + THE FACULTY + THE MUNICHS

The Skinny: Drownedinsound.com summer all-dayer with free BBQ (until it runs out, approx 7pm most likely).

APARTMENT have been quietly building a name for themselves over the last 18 months or so, aided by some support slots with The Killers, The Bravery and Jimmy Eat World, going on to sell out headline shows at the Dublin Castle and Borderline, and grab themselves a place on the DiS stage at the Wireless festival. Their debut fierce panda single 'Everyone Says I'm Paranoid' found its way into the Top 75, and second single 'Patience Is Proving' is to follow on the panda label again on July 4th. They often find themselves described as 'Morrissey fronting Interpol', which is no bad thing. 'While some bands spend years affecting swagger and poise and generally pretending to look like rock stars, singer David Caggiari was born with one foot on a monitor. When they deliver the single a couple of songs in, his presence looms over the entire stage, and his sonorous tones boom round the whole of Camden. This must be what The Bravery imagine themselves to sound like' frothed DiS regarding the aforementioned Dublin Castle gig, giving it a healthy 5/5.
www.weareapartment.com

ARCHITECTURE IN HELSINKI are an 8-piece Australian musical adventure; something like you would imagine the children of Flaming Lips would make if they grew up in a commune on a farm somewhere magical. Hard-to-decribe overly creative genius with a subtle pop ear bursting through the chaos. Exciting and challenging and fun. This band are going to be making great music for years to come, and this is their debut UK gig. '... every catchy melody on this disc (and there are dozens) tends to arrive and depart faster than a subway train. Armed with more ideas than should probably be legal...' - Pitchforkmedia
www.architectureinhelsinki.com

LES INCOMPETENTS formed on a diet of early nineties children's comedy and Ribena concentrate, Les Incompetents live on the edge. Of London. The boys got it together in order to compete in a school battle of the bands as the rough-diamond six piece that is Les Incompetents. Currently gigging their 'off-kilter post-bozo blues-garage disco-country' all over London, they release their debut single the following day on White Heat recordings, limited to 500 7"s. And the battle of the bands? Second place...
www.lesincompetents.co.uk

THE PATTY WINTERS SHOW are a new 3-piece from London, who would like to think they sound like the melodic genius of The Bangles mixed with the subtle complexity of Shellac. Luckily, they've been likened to The Wedding Present, Stellastarr* and Belle and Sebastian. Short, sharp and snappy.
www.thepattywintersshow.com

THE FACULTY are clearly the Universe's Music Faculty. Shimmering guitar swirls, telegraph-wire whistling in the wind, chiming chords with ringing harmonics, hot-tar pedal pitch-bending. Irresistibly simple upfront bass melodies. Drums of rolling thunder, a steady rumble between the lightning bursts. Songs about the descent into the underworld and other psyche-outs as compelling as they are sombre. They've featured on the 'Getloaded in the Park' album 2004. The first single 'Messages/Sombre Honeymoon' was released on the Faculty's own label Glee Recordings in January 2005.
www.thefaculty.info

THE MUNICHS combine the feel-good sound of the summer with effortless singalong melodies, making it impossible to do anything but smile. They've garnered legions of fans in their native Bournemouth and with widespread industry interest, things are looking really bright. Catch them while you can!
www.themunichs.com