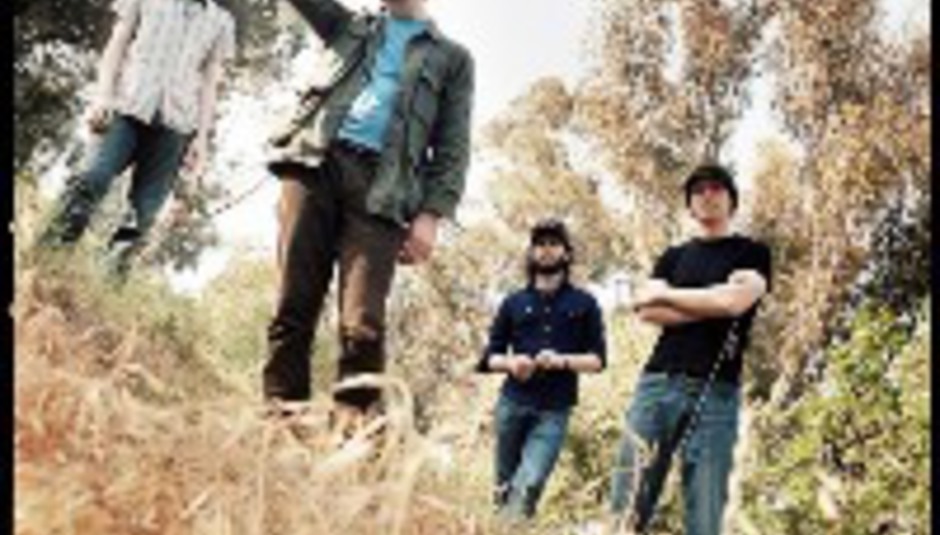 It’s been two years since Nine Black Alps arrived, seemingly from nowhere, to a flurry of anticipation and expectation with their debut album, Everything Is. Encasing singer Sam Forrest’s angst-ridden acoustic songs in thick sloppy walls of guitar, the Manchester-based four-piece barely knew each other, never mind their own songs, before they were airlifted to pop stardom by a major label.

Endless tours of the UK and abroad included the band spectacularly tearing up SXSW in 2006. Soon enough it became normal to see Forrest sporting his trusty army shirt and some serious eyebags under an expression that suggested he was on the verge of a deep slumber.

“The half-alive look is kind of my look at the moment,” says Forrest blearily on a sunny June morning. “We spent two months touring around America... What did it do to me?” he asks, repeating my question. “I don’t know. I kind of lost my sanity but it gave us all a good sense of humour and a sense of futility.”

From the template of Everything Is, Nine Black Alps clearly have always had a greater empathy with American music, and as such they stood at arms length from the emerging generation of new Britpop bands. Surely, then, touring the US was something they’d always set out to achieve?

“One of the things you want to be in a band for is that romantic idea of touring America. It was always one of my dreams to tour there – just to find yourself in Idaho or somewhere. But it’s different when you’re actually in it. It feels like you’ve got to achieve something concrete, but you feel like your pissing in the ocean. Career-wise, it probably wasn’t the greatest thing to be in America for that long, but life-wise it was ace.”

The sophomore album, Love/Hate, is now completed and, according to Forrest, it has been for over a year. Recorded with producer Dave Sardy in LA, tracks such as ‘Burn Faster’ and ‘Painless’ immediately capture their driven guitar sound but, vocally, Forrest no longer sounds as though he’s scraping bark with every breath.

“I didn’t realise I’d have to tour Everything Is for two years!” he exclaims. “And the idea of writing songs that are about five notes higher than you can actually sing isn’t the smartest thing you can do. The idea for this one was to make it less painful for myself physically. I think I’ve actually worked it out, now. I’d never sung properly before the last album, so this time I knew what I wanted to do rather than just shrieking like a loon.”

With summer festival dates approaching for the band, they’ll soon have a chance to road-test their new material on their UK fanbase (they also have a handful of June dates – click here). When I point out that most second albums see bands over-compensating for a lack of ideas with lavish production and orchestras, Forrest doesn’t dismiss the possibilities of moving away from the guitar/bass/drums blueprint.

“We’ve done demos with strings at home, but with this album I was torn between making a more acoustic album and a more rocky album, and I think we settled on the rockier route. I don’t really know why but it just ended up that way. I do write these very timid acoustic songs but for some reason when we get together it results in a few distortion pedals being trod on.”

But with the added bonus of drummer James Galley revealing a set of well-tuned vocal pipes, the band have added another weapon to their armour as the singing drummer now exchanges plenty of harmonies with Forrest.

“Melody is the main thing with me, and I’ve always listened to The Beatles, where it’s all about harmonies, and bands like Teenage Fanclub. It’s just something that takes us away from being another balls-to-the-wall guitar rock band.”

Some of the lighter elements of Nine Black Alps sound, their affinity for Americana and Elliot Smith, was trampled over by reviewers of Everything Is keen to label them as Nirvana rip offs. It’s clearly the one aspect of the Alps’ experience that has affected Forrest the most.

“We definitely got the whole Nirvana thing fairly hardcore and it was pretty embarrassing, especially when I don’t really like them. I’d go on the internet and find that people wanted us dead because they thought we were fucking the corpse of Kurt Cobain…” he sighs. “It’s not something I ever thought that would happen to me in my life.”

In between touring and recording, Forrest has played a few low-key solo acoustic gigs in Manchester in addition starting an impressive side project called The Sorry Kisses. Working and writing with people outside the Alps has provided him with some sense of sanity and purpose. However, the Alps also contributed an acoustic track, ‘Pocket Full of Stars’, to an animated film about a penguin called Surf’s Up for which Forrest “spent a week on my bed trying to think of something wistful that a penguin would sing to himself”. Joking aside, he can see himself eventually writing songs for other performers and projects.

“The more stuff you do, the more you stretch yourself and the more enjoyable it all is. I don’t want to be seen as being Mr Grunge Lite in 30 years’ time. That’s more depressing than anything.”

Love/Hate is expected to be released in September; a single, ‘Burn Faster’, is released through Island on July 16. For more information click to the band’s MySpace site, here.