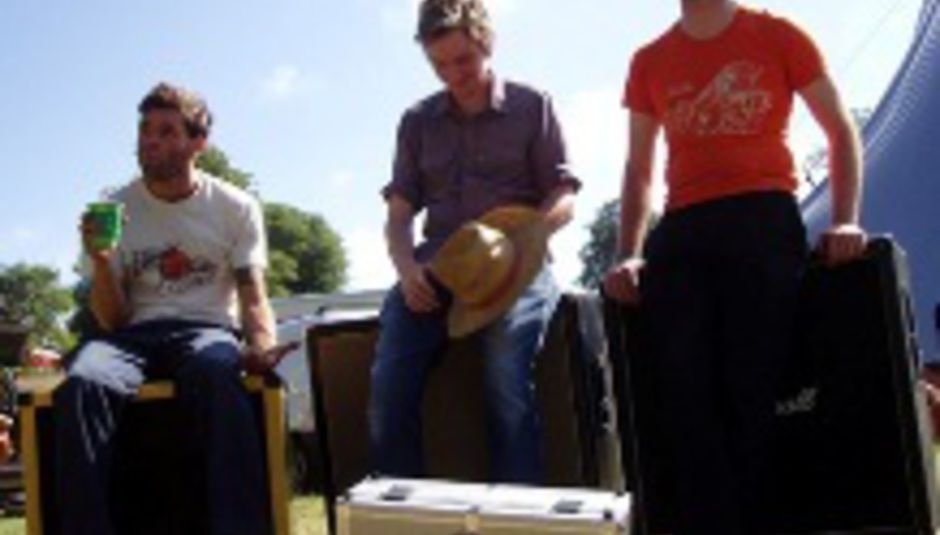 Take a look at Nottingham-based three-piece Lords' MySpace site and their genre description pretty much describes them to a tee: Rock, Rock, Rock. Their debut album This Ain't A Hate Thing, It's A Love Thing was a hard (blues) rocking bastard and a half. I played it at work yesterday and two middle-aged men combusted. A year on from its release, how do the trio – Chris, Phil and Elvis – plan to top it? I sit down with guitarist Chris to find out…

As you recorded your second album, how complete an idea did you have of what you wanted to record? Did you have an exact set of songs, or did you change some ideas or write new tracks as you progressed?

Lie: we went in with everything meticulously rehearsed, as always, and recorded everything live, on the first take. We pride ourselves on our efficient and mathematical approach and we consider this to yield a result which is more 'real', which is all-important to us.

How long did it take to come up with these ideas? What is your songwriting process?

We started doing demos of all the ideas we had in our practise room before we went to SXSW in March, and then we just went into the studio for a week when we got back and played for hours on end until all the little parts moved themselves together into songs by their own accord. Like splatter painting. Or hypno-birthing.

Describe the pressures you felt trying to top your debut album…

To be honest, my life seems to chug along so quickly at the moment that being back in the same studio feels like we never stopped making the first one. Did anything happen in between? I took photos both times and the only way I can tell which is the first album and which is the second is we're all slightly fatter on the second album photos and Jay, the studio owner, has a slightly less ridiculous hairstyle.

Are there any things you are trying to stray away from, things that you did on your first album?

Not consciously. I think we were just really into tightening it all up - not in the way it sounds but the way we put the songs together. We wanted to make all the things you hear have a point to them. We've been listening to quite a lot of really rhythmical music in the last year or so - stuff that's simple and groove-based to listen to but is actually pretty weird underneath, like The Meters, Ethiopiques compilations, Moondog and ZZ Top. That seems to have rubbed off in that we're not banging parts together as much - we're creating these grooves or feelings that last whole songs, not just little bits. Of course, it still sounds like a total mess.

How do you think the new album compares to your debut? In terms of style and, if you like, quality...

We always have a codeword on a plaque in the studio for the duration of any recording, like a lucky charm. For the first album it was "TRIUMPH", and this time it was "FRANK BEARD". So when we struggled we just considered what Frank would do in that situation. The answer: Frank would never make it hard for himself, ever. He may also occasionally wear an all-in-one ‘80s sports jumpsuit, but we never really took it that far. Or at least, Phil (guitar and vocals) and I didn't.

It's hard to say what something sounds like when you're in the middle of it but to me it sounds more rocking, and more to-the-point. I think the new stuff wears its influences really proudly, even though some of them might not be 'cool'. The vocals are a step up, too. It seems like Phil treated the new stuff as a vocalist first and foremost and what the lyrics are about are more direct, too. It seems to be an album about not having much money and wanting to treat those around you well despite it, and the problems that causes. One of us is about to become a father too, so that joy/worry definitely had a bearing on things. I guess we're not going for the teenage market...

How much are you influenced by other artists?

There always seems to be other bands' albums floating around when we record - not so much bands we even sound like, but something will be kicking around the studio that we listen to, something that maybe someone else has brought in. This time it was a couple of albums by bands we have a liking for that are basically terrible records. Records we all wanted to be blown away by and spent money on that stunk. Big records, too. So this time I felt, anyway, that we had some 'how not to over-egg the pudding' records to rein us in a bit.

Things have definitely been a positive influence on us as well, but because of the way we play and the sounds we use it might not always be apparent. But I know lots of things have really affected us in a good way. Lungfish, Thin Lizzy, MC5, The Monorchid, Soundgarden, Boney M, The Groundhogs, The Gossip, Comets On Fire, Earthless, Bo Diddley all spring to mind immediately. And, of course, Bilge Pump. We knew they were making a new album so we had to do one at the same time or we'd feel left out.

Describe your relationship with your record label, Gringo…

Matt, who runs Gringo, is a friend first and foremost. He doesn't hassle us to make records; we just do it when we feel like we've got something to share, or something to put down on tape that's worthwhile. Matt's always supported that and even loaned us money when things have been tricky (things are always tricky). We don't have a contract with him or the label, so we're free to do what we please. We'll just give him the record when it's done and see if he wants to put it out. What keeps us there is because we like it, not because we legally have to be there.

That said, if anyone wants to license the record from Gringo to release abroad then we're open to offers...

Anyway, it's called Everyone Is People and it's out as soon as we find a photographer who has some colour infra-red film and knows how to use it. Anyone??_

Lords play the Susumi in Derby on Sept 14th and a special improvised (and DiS-endorsed) set with former Can vocalist Damo Suzuki on November 10th at Nottingham Junktion 7. Check out MySpace for more.