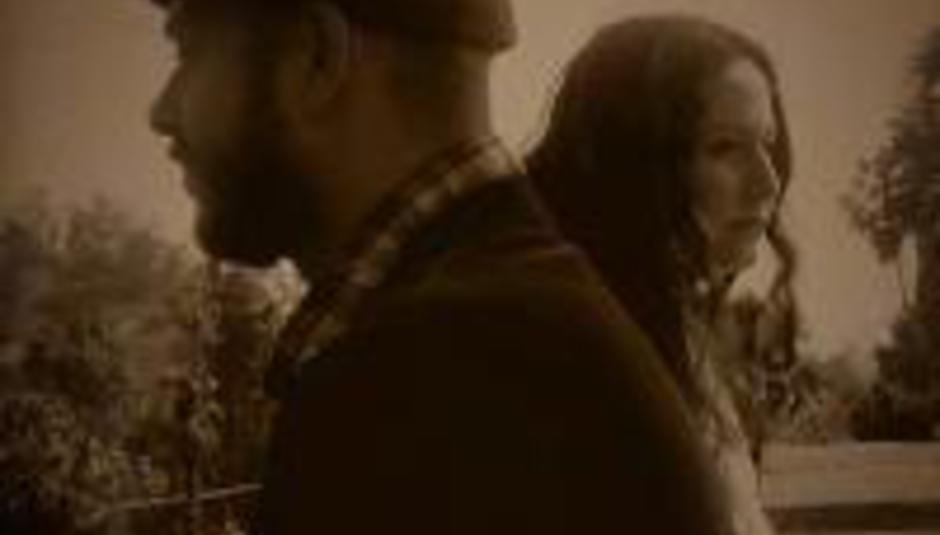 DiScover: The Battle of Land and Sea

DiScover: The Battle of Land and Sea

Their music is the sound of the water. They play quiet, folk songs telling stories of love and the sea and their album sounds as if it was recorded onto a tape recorder on a boat in the middle of the ocean.

Hailing from Portland, Oregon, they’re an act comprising of two halves – Sarah O’Shura (vocals and acoustic guitar) and Joshua Canny (electric guitar, banjo). Their partnership is comparable to that of Mazzy Star’s – Hope Sandoval the voice, and Dave Roback providing the atmospheric backing. Their music, too, evokes the sound of Among My Swan-era Mazzy Star when they bring out the echoed electric guitar, or Cat Power in her better days. Maybe, at certain points in their songs, you could even say they sound like Cocteau Twins if they’d stripped their music of the effects and made an acoustic record. Folk music has a habit of restricting itself to the summer and autumn seasons, but this suits both sun-beaten days and long winter nights. It’s dark, sparse, intimate, and brilliant.

They are, by a considerable margin, one of the best bands this writer has found from across the Atlantic of late, and their self-titled debut album is out on Notenuf Records from January 15 (review). As debut albums go, it sounds stunning. So without further ado, please welcome The Battle of Land and Sea.

Your sound is quite unique, but who has influenced your songs? I hear shades of Mazzy Star and other psychedelic bands in there.
Sarah: Influences are so vast, but for me what's most influential is how a record sounds, the feel of a record can transport you to a different time and place. That's what we were going for on this record, a warm nostalgia. I can't put a finger on it exactly but there is a sound that certain records have that just grabs me and makes me want to listen to them a hundred times over. Midlake's The Trails of Van Occupanther has it, so does Iron and Wine, Mt. Egypt, Hope Sandoval's Bavarian Fruit Bread, and nothing can beat that old jazz record sound. I listen mostly to jazz and classical while in the car alone. The psychedelic side definitely intrigues me and it's something that during the recording process I’d like explore more, I am definitely a child of the ‘70s. Jacob Golden, who produced this record, has such a good ear for bringing out all those little nuances and for capturing the magic of a performance, it's not about a take being perfect, it's the vibe for me that translates onto record. I have a hard time stating specific influences because I am really not sure of those myself; I have a strong opinion of what sound I like and dislike and that's been very helpful in getting a sound that I’m pleased with.

The band has a DIY aesthetic with the self-booked living room shows, handmade merchandise et al. Was this a conscious decision to do it all alone, or just something that got going and never stopped?
I just got tired of waiting around, and a lot of bands I think suffer from that too. Getting signed isn't the pot of gold at the end of the rainbow, it's the beginning. I just realised that if I worked hard at getting the music out there and started living a more creative musical life everyday that nothing unfavourable would come from that, before anyone else was involved. I wanted to incorporate what I love to do in my free time into my musical life more, it saved me. Screen printing in the living room, sewing endless CD sleeves while watching television: I love doing it and the satisfaction is unbeatable... though I need a basement now. I'm done with having my living room look like a sweat shop! It was a conscious decision in the beginning to do it all alone, I like having the creative control and when I see an artist whose work I admire I have no problem utilising their talents to further my vision. That was the case for the cover of this record. I was on the hunt for an artist and I stumbled across the wonderful artist Mel Kadel. I fell in love with her style and I liked that her illustrations are both whimsical and dark, that's how I view the music so it's a good fit.

From the band name right through to the lyrics and artwork, the sea is a recurring theme. What is your relationship with the water?
My first memories were in Hawaii, where I lived until I was six years old. Not many kids get the chance to learn how to swim in the ocean, and I'm grateful for that. I've always loved the sea, the feeling of being on the shore and being really enamoured with what is out there beyond what you can see, it's romantic and imaginary. In my mind the ships are old and wooden like in the old days, sailors at sea with their wives at home pining and counting the days until their love returns safely. I love that pull of energy you get from being near the ocean, too – it puts life in perspective and it's inspiring, as we are so small in this world.

You're signed to the rather great Notenuf Records. How did this come about? Did you find them or did they find you?
Sort of both, actually. I worked with Steph, one of the head honchos at Notenuf, through my previous job and we became friends, though we've yet to meet in person. They didn't have any folk acts on their roster, so I never really thought of it as an option; I was just sending a friend a CD. She was giving me some ideas of labels to send it to. I think she thought I was looking for a big indie fish of a label, which I wasn't necessarily. I just wanted a musical home that I could be really hands-on with and get our music out there to able listening ears. When the idea for Notenuf to put it out came up I got really excited and it just clicked that this is perfect. It's a good match – our creative thinking is very on par with what Notenuf does, that's the key. I like that it's a new direction for them.

There are two of you in the band - how does the songwriting work?
I write the songs. I'm not very prolific, though, so it can be months before anything new crops up. But then, bang: there are two new songs! I'm patient with it, though I tend to be very circumstantial with ‘writing time’, so I'm my worst enemy because there can't be anyone in the house, I can't have neighbours listening in, there can't be dishes in the sink, I prefer an overcast day... Seriously, all my writing happens in the colder months. I think Portland will be good for my writing. This band began as a ‘musical project’ and I wanted to have a rotating cast of people to play on the records and play with live. So for this record it was me bringing the songs to Josh and us sharing a bottle of wine and having the accompanying guitar evolve until we're satisfied; sometimes it took a few hours and things just clicked, and other songs took months to become more realised. For a lot of the songs I’ve roughly recorded them on a 4-track or my laptop first before anyone hears them, which helps tremendously for me. The direction of the song is clearer and when it's time to record we can experiment and build from there.

The reception to the tracks on your MySpace has been great - hundreds of positive comments. Does the use of the internet help you get attention from people, considering your only other release was a small run of your self-made mini-album?
Definitely, the internet gave us such an opportunity which ten years ago wouldn't have been there. With our mini-album, we sold copies to people as far as Thailand, Japan, Brazil, Iceland, Turkey and Russia. That would've never happened without the good ol' World Wide Web. It's encouraging and it's great for indie bands; it takes the DIY movement to a whole new level.

Are you worried that you'll be lumped in with the freak-folk 'movement', or perhaps worse, New Weird America? After all, journalists are known to be lazy, and Joshua is bearded!
Good lord I never even thought of that. I really love some of those artists but I don't think of us as ‘quirky’ enough... though I could be wrong. We sit in a strange place I think, being a bit quiet and having a more straight-to-tape kind of sound definitely doesn't grab the greater percentage of people right away. I definitely think that the success of Iron and Wine has opened people's ears a bit more for us – thank you Sam Beam. I'm not worried of being lumped into the freak-folk or other genres, as I have no control over what journalists say or label us as... so no worrying here, though it's interesting. I'm happy to be a bit left of centre, so wherever that is, so be it.

The debut album is out on January 15, but what are your plans after the release? Touring, I suppose? World domination?
Touring for sure. We are planning to tour the UK in early 2008. I spent almost half of 2007 in England this year, driving Jacob around on his UK tours, and now I'm eager to get my own music heard. I think the UK is a great place for more mellow bands, and we've had a good reception so far. I'd like to tour a lot overseas. As for stateside, we'll be touring over here as well, hitting the major cities first then building upon that. It's a big country so lots of places to play.

The Battle of Land and Sea can be found on MySpace here.