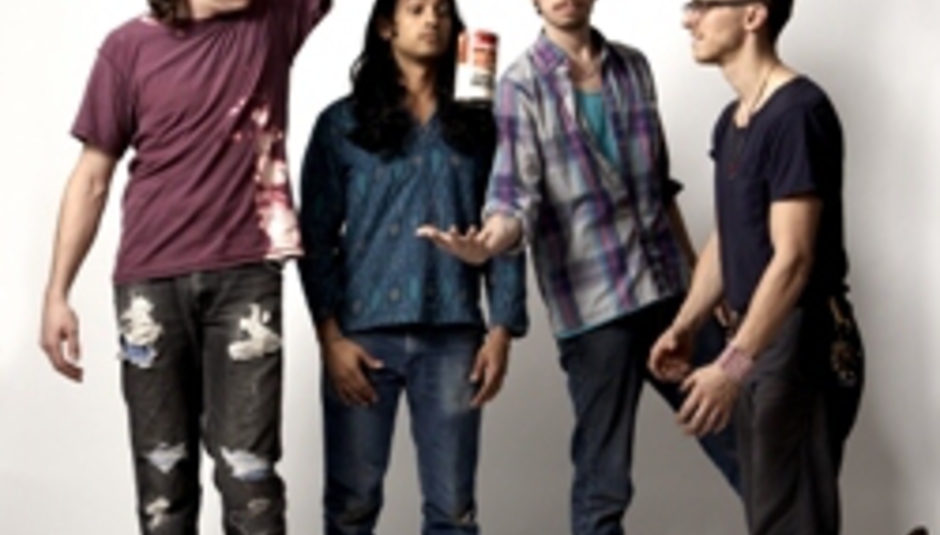 Chris Keating, Anand Wilder, Ira Wolf Tuton and Luke Fasano are Yeasayer, musicians out of time in a modernity obsessed with the now over the next. From Brooklyn the four-piece come, clutching copies of their debut album ‘tween thumb and fore; to say it’s entirely unique when compared to every other release in 2007 is selling its love it/hate it charms rather short. You will not, genuinely, hear an album like All Hour Cymbals anywhere else for some time.

Released in November via newly created (for this release, no less) Monitor offshoot We Are Free, All Hour Cymbals is already splitting the music press: are its echoes of Fleetwood Mac ‘cool’, or is this patchwork puzzle of a pop record simply so out there that all known bets need to be off? DiS caught up with Chris Keating to discuss the roots and reason behind Yeasayer.

The band’s brief jaunt to London in August (review) – a good time had? Are you looking forward to coming back in November?
Absolutely. The London audiences were fantastic. It was a great opportunity to be able to stay in one city for a week and play a variety of venues.

The August dates saw you playing on bills with pretty varied acts – is this common practice, especially considering that there really aren’t that many bands that could be ‘bracketed’ in with you. Can this be seen as both a blessing and a hindrance?
I like the idea of playing with as many varied acts as possible. It seems really boring to get lumped in with a genre or a scene of similar-sounding artists. We purposefully try to play music that is difficult to fit into a genre and I see us branching out more and more. One of the best shows we’ve ever played was with Dirty Projectors, Spank Rock, and Ponytail all on the same bill. That kind of diversity is ideal.

Which leads to: the music, and All Hour Cymbals. MySpace may list certain acts as influences/inspirations, but the label’s obviously keen to promote your maverick streak. Just where does the music of Yeasayer begin? Is it the gut, the heart, the head? Is it proggy by design or by default – pop twisted by modernity?
I don’t find our record to be particularly proggy at all. To me, proggy brings to mind King Crimson or Pink Floyd songs in difficult time signatures with outrageous technical prowess. We are very committed to some semblance of pop formula but the more choruses and memorable parts in a song the better. The music begins in the heart but the head keeps the cheese in check.

Your debut album: pleased as punch with it? Does it feel fresh, or are these songs that have been knocking around rehearsals/gigs for some time (as is usually the case with debuts)? If that’s the case – or even if not – are ears tuned to the sound of album two yet?
I am pleased with the record but we learned so much during the year-long process that I am very eager to get started on the next record. We do a lot of recording at home and we have demos and works in progress that I am extremely to flesh out as a full band.

Do you have any particular hopes for the reception of All Hour Cymbals, or can you not predict how such an album will be met by critics? What’s the feedback been like so far? We’ve certainly had it on a lot in the office…
Of course I hope that the record does well but I really don’t have any idea what to expect. It would be nice to make music as a full time job. It’s a lot more fun that driving trucks around New York, which is what I was doing for two years during the initial years of the band.

We Are Free was born out of Monitor – why the new label for this new band? Would Yeasayer have sat awkwardly on the Monitor roster?
We are happy with the new label, it feels like a fresh start. Jason (Monitor/We Are Free) had some strong feelings and reasons for starting the imprint and we all trust his judgment, so we just roll with what he is doing over in the head office.

I understand that recording was spread over some 11 months – was this purposeful or through necessity, an inability to get together often enough, or to reserve studio time? Or did the songs simply ‘come’ over that period of time, i.e. there wasn’t a set-in-stone tracklisting when you began recording the album?
The initial recordings were done with no support from any label, so we were working at home and in my parent’s house and recording demos at our practise space. After we became involved with We Are Free we spent a few days in Baltimore with J. Robbins. We knew that the record needed an extensive amount of overdubs and studio time and there simply wasn’t the budget for it so we did it all ourselves over the course of a few months, learning as we went along. Up until our final mixing session with Chris Moore we were still unsure what would be on the record.

What, presently, are your long-term hopes and goals for the band? Success on a level where financial stability’s a reality, or will you pursue the band whatever the commercial outcomes? Is this it, so far as bands go for you guys? I assume – perhaps wrongly – that you have been in different bands before? How does Yeasayer compare?
I would love for the band to provide financial stability, if only because boring day jobs get in the way of creative endeavours. However, I will pursue the band regardless of the paycheck. Anand and I played in a band together in high school but this has been the only real ‘band’ of my adult life. I was producing hip-hop tracks for rappers in Chicago for a year and I played in a solo project that helped segue into the band.

And finally – inversed, this – just run us through where and when the band actually got together. Usually this comes from PR/bios, but yours isn’t so straightforward!
I started the band with Anand at my apartment in Brooklyn. We had a different line-up when we first started and as the project grew legs Ira, who is Anand’s cousin, joined us playing bass and clarinet and vocals. Anand moved up to New York from Baltimore and we got a place together where we started building a home studio. Luke joined us in the Spring of 2006 and we’ve been a happy family ever since.

All Hour Cymbals is out via We Are Free on November 4, and the band’s MySpace is here. Tour dates as follows: