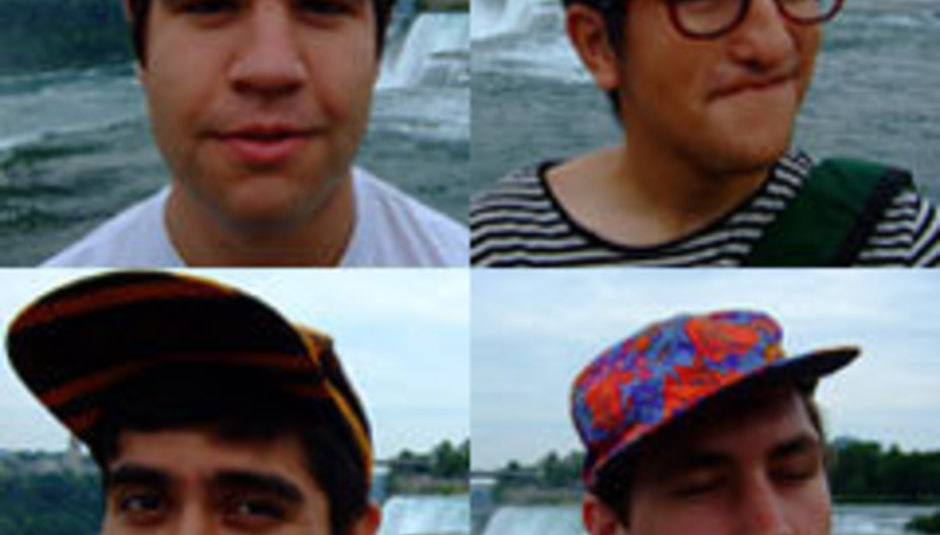 Dragged in on strange, new surf, Abe Vigoda are bedraggled but happy. Landing last night, they bobbed soft and unconscious among the flotsam and idle-dragging waves ‘til sunrise and the first, early stirrings of birds; green and red and golden crested up past the sand in the island’s bravest, chattering canopy.

It’s a happy life for Vigoda on the island. There’s plenty of strange, new fruit to eat, especially when agile Juan Velazquez (he of guitar and a grin that wins) is feeling up to fetching steel coconuts from one of the palm trees that stretch away along the beach, almost to vanishing point. He almost always is, so Reggie Guerrero (glasses, wise) almost always has something to practise his infant drumming on. And there’s a freshwater stream that runs down into the salty lagoon so bass player David Reichart (bass, ‘tached) can shave and Michael Vidal (guitar; leader?) has something to season the young, crumpled okapi with. Him? Bare hands. Yes, all in all, the isolation has been good for Abe Vigoda and it’s been good for their music, even if their sense of reality is by now completely and utterly shot.

Ideal woman?
JV: Well I can't speak for everyone but my ideal woman would have to be an attractive masculine guy between the ages of 18 and 30... but that's just me.

Perhaps not that shot, then. In a way, I suppose Abe Vigoda are as interested in keepin' it real as the Enemy or Hard-fi. Life suddenly starts nagging for acceptance again when the mundanity you're presented with is deserted and tropical rather than Coventry or Staines.

Who and what do they really sound like? Fire Engines, el Guincho, Ecstatic Sunshine, Smiths… Smiths? It’s there in the high-strung, copper-tooth guitar; the oily slugs of bass; the kind of Technicolor you get when you drop a hundred pain killers and let your best friend hit you repeatedly about the head. Smile; this is Stunted s-sound. Through repetition Vigoda hold themselves tight and close. Will they ever stop bashing away contentedly?

“Always bashing,” affirms Vidal. “But lately things have taken a turn for the overtly beautiful. Same pace. I like it….it’s hard to tell where things are going to go. I wouldn't have thought that we would sound the way we do when we were first starting out.”

The band drifted together in 2004, solidifying thus far in a slew of EP and comp appearances and two longplayers - the tight, little punk jams of debut Sky Route / Star Roof and last year’s Kid City follow-up. Like Vidal says though, the act’s sound has grown, even in the space of a year from “this really raging, dissonant thing” into what the people have decided to call ‘tropical punk’.

“We kind of re-thought the entire sound,” continues Vidal. “Over time these really melodic guitar parts kept on popping up during practices and in our songs and started to really take over everything else. It’s way bright and more exciting to play.“

Is 'tropical punk' a stupid phrase?
MV: I don’t think so… I think it makes sense with what we sound like. But I definitely don’t think that’s all we sound like, it’s mainly the rhythm section that really has a tropical, dub feel to it.

We tried to mash calypso into Sunn O))) in the office the other day and it just didn't work. What made you want to make 'tropical punk'?
MV: I love that you did that. Like I said, it was something that totally took over. It just felt right. I started buying African guitar and gamelan records almost after the fact… Not that it doesn’t influence us, but I kind of just felt a relation between what we’re doing and that kind of music.
JV: I like the idea of playing guitar parts that could be played on a thumb piano or steel drums - sometimes Mike’s guitar sounds like a steel drum to me because it’s really high-pitched and bright.

Steel coconuts are lies. But Vigoda share that playful young carelessness that comes shimmering from Caribbean pans. Source? Well they, aged from 20 to 22, are still at “school”. David – and let’s ditch the surnames, these four aren’t stuffy Britishers - studies engineering, Reggie: photography, Juan: English literature, Michael: art. Do those classes inform the sound at all?

“The lyrics are very, very image heavy. I feel like the new record is going to have a lyric sheet so people can see what’s going on.”

Maps may be necessary as voices swing, sigh and lilt; peppered low in the tropical mix - but regulars at the most exciting club venue in the New World seem wise to enough without getting studious. I ask Abe Vigoda to bring you up to date with their past in just five words.

“WE PLAYED AT THE SMELL,” they say.

This year, DiS has waxed on, first, No Age (click) then Mika Miko (click), Barr (click) and HEALTH (click). All acts that you might, we suggest to Vidal, associate with downtown LA all-ages venue the Smell. Is there any resistance on his part to my rubbish, lumpen, outsider attempt at scene-building? Vidal’s response is as refreshing as it is eloquent.

“No - all of us started at the Smell and it’s still a place that we all play pretty regularly. It’s such an important place to all of us and it’s really inspiring to see it get recognised for what it’s brought to the community. I seriously doubt that anyone would have resistance to being associated with the Smell; in fact I’d say we’re personally proud of it and are glad that people make those associations.”

“Inside... it smells kinda dusty and on really packed nights... like B.O. Outside it sorta smells like piss.”

Furtive skirting and scouting done, is there anyone else we should be listening to, from the Smell and beyond? Brooklyn's High Places - "beautiful pop" - Maria - "crazy kids...similar to Orange Juice or something" - and Talbot Tagora - "amazing live...the recordings sound fucking insane" - are all fiercely recommended by Vidal and Velazquez. MySpaces can be reached through bold band names.

As for Vigoda, their next, third album will be out as soon as they're done recording. It's about 3/4 of the way there, but there's no label yet so they can only keep fingers x'd for next summer. I don't think they'll be waiting long enough for fingers to purple - I'd release it myself if I could. Could I? "If anyone is interested let us know!" Next summer is also when the band expect to be heading to Europe and the UK for their first live shows on our continent. DiS, though, is trying to haul them in safely before that. In, and on to our island...