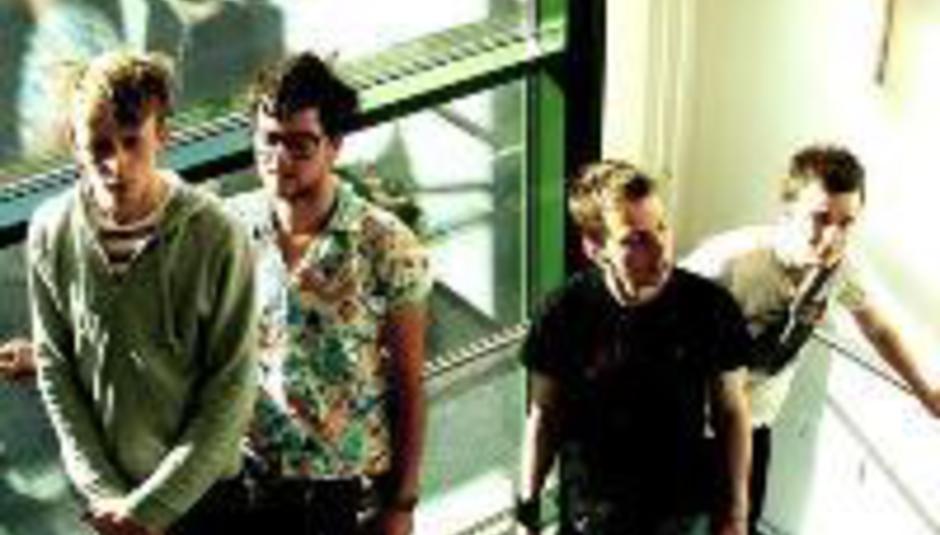 It’s not exactly your typical rags to riches tale, given the four men of Errors can dress themselves perfectly sensibly, thank you very much, and their pockets are far from bulging with silver and gold, but the plucking of the Glasgow quartet by Karl Hyde of Underworld for the latter act’s autumnal tour dates turned heads in the mainstream and indie-dance underground alike. Here was a band with an EP and a couple of limited-run singles beneath their collective belt – good releases, mind, but hardly widely available – opening for a Genuinely Massive Chart-Conquering Act. Three nights at the Roundhouse? One word: wow.

Or two, as it happens – though DiS meets half of Errors, namely Greg Paterson and James Hamilton, at our Paddington offices ‘tween nights one and two, the third of three is postponed. As repeated offerings of biscuits to go with their coffee are ignored/passed, the pair laugh about their predicament: “The reality did start to set in,” says James. “We’d be playing to a room full of Underworld fans, and I know what I’m like when a support band’s on – standing at the bar, arms crossed.”

Alright guys…
J: Aye, but as you can see I’m wearing the most ridiculous jeans ever today. (They do look like lady jeans.) I thought, when I was drunk last night, that wearing these white jeans would be cool, and left all my other clothes at the venue.

Underworld, then: how?
J: Karl from Underworld – ooh, I dropped a name – got in touch with [Error’s label] Rock Action as he’s a fan of a few of the bands on the label, and asked if we wanted to support them on their Glasgow date. We were like, “YEAH”, and there was allegedly another band already booked for the whole tour, but they pulled out. So, they asked us if we wanted to do the whole thing, and we were like, “Wait, give us a second to think about this… YES”. Without really thinking about it, we just started to pack.

And were crowds, despite your obvious reservations, generally accepting?
G: Well, most people would come in around the time of our last song.
J: But we’re quite pleased that it wasn’t just, say, an agent that hooked us up with the tour. The band actually asked us themselves, so that’s really nice.
G: They came up to us right away, and we get along really well.

Is it not a bit frightening, playing to so many people? The Roundhouse isn’t exactly small…
J: At the Roundhouse, we’re playing to three and a half thousand people, potentially, every night. The first gig of the tour was a headline one in Cardiff, before we met up with Underworld in Southampton. Cardiff was amazing – it was this little club show, and everyone was there to see us – but, of course, when we got to Southampton… well, everything changed. In Cardiff, people were asking us to sign stuff! Well, maybe it’ll be worth something someday, like £3.99 from the bargain bin! The next day at the Guildhall in Southampton, it was just like… (makes screeching, gurgling loud of terror). Something about that made me absolutely terrified. I shit myself. Like, we’ve done Rockness, which had a 10,000 capacity, but it wasn’t that scary. There was something about Southampton… I guess everyone in the festival tent was drunk and partying. Actually, after the Southampton set, someone came up to us to say we were really great and to apologise for Southampton! He was the elected spokesperson, I guess.

I’m from Southampton. We always ensure someone’s on hand to apologise for our rubbish city. But, overall, good responses on the tour?
J: Most nights we’ve had a pretty good response. There was one night, at a certain town, that wasn’t so good. I’m not saying where, but, um, Alan Partridge. THAT one. They were… well… they either didn’t get it or they got it and didn’t like it. I’d like to think they didn’t get it.
G: Newcastle was fantastic.
J: Glasgow was ridiculous.
G: That was the most mental I have seen any crowd go.
J: We could get used to playing these bigger places pretty quick. The catering can be great.
G: Last night we had a selection of lamb, steak or Thai prawns.

Don’t worry – when you get out on you own headline dates again I’m sure it’ll be back to the Ginsters and four-packs…
J: When we do a proper headline tour, it’s gonna bring us crashing back to earth. No more M&S Simply Food, and back to couches to crash on. This has probably given us a totally false impression of touring at a higher level.

But I’m guessing you’d not be averse to playing larger places? The band’s music is pretty accessible – there’s potential for genuine crossover I’d say, especially in light of LCD and Battles doing well this year.
J: Hopefully, when the album’s out, people will pick up on the fact that we have this crossover appeal. Like, we did a show with Calvin Harris, some Becks promotional thing. Basically, we were selling out – we LITERALLY did it for the money, as we needed money to do this tour. And they offered us silly money to play to a massive hall full of people who’d won tickets through Becks competitions. It was… kinda… well, there were a lot of people there. At the start of the night the idea was to just get the set out of the way, but by the second song people were dancing, and it turned into a really fun show. Our friend Rebecca had done these great visuals for us, all these cool projections. We need more visuals…

That’s something I saw on your MySpace, a comment from an audience member along the lines of you needing a greater visual element to your sets.
J: We were getting slated in reviews! Someone said we had no stage presence at all, and that we needed a ‘Bez’ type character! In another review, it was like, ‘nice music, shit visuals’.

Maybe you should ‘do a Battles’ and whack your cymbal way up there – that is their Bez.
J: Ha ha, yeah… maybe I will start putting my cymbals higher. Your five-track EP of 2006, How Clean Is Your Acid House, was recently re-issued through Rock Action: to coincide with the tour?
G: It was simply out of print, that’s all. And now was a perfect time to put it out again.
J: It was getting done anyway, to be honest, so its re-release was a complete coincidence.
G: We might put out a single, too, before the album. Nothing, like, new, but maybe a mix of ‘Mr Milk’ that’s great.
J: Next year there’ll be the album, a single, and there’s a planned white label release too.

You’re keen to up your productivity I’d wager? (Last single, and last release) ‘Salut! France’ was the best part of a year ago.
J: We really need to get ourselves going, but it’s only been in the last year that we’ve really started focusing on Errors as an ‘actual band’ – everyone has jobs and things, so we’re trying to do as much as we can while not actually being able to do as much as we can. The label’s been really supportive of us throughout, and they’ve been really patient. Most labels would have made us release a shitty album last year, with six really bad songs on it.

Considering that patience, is your debut album everything it can be?
J: It’d fucking better be! But… I’m really impressed by it.
G: It feels like more of a ‘band’ record than previous releases.
J: The tracks on the album have live drums on them… so that might piss a few people off. Sometimes, with tracks, one or two of us will work on something and then, a month or six weeks later, we’ll be in the practice room and someone will ask, “How do we play this?” So we’ve been working backwards as a band for so long – making songs and then working out how to play them live. This album’s a little different.

And no temptation to bring in a ‘proper’ vocalist?
G: I think we’re pretty much set on never doing it… or not clearly, anyway. We had vocals on the EP… what were they about?
J: ‘Terror Tricks’ is about Paul McCartney. Not that you can understand what’s being said.
G: I don’t think that any of our songs need vocals for them to work.

And the album: will it be all new material?
G: The new album won’t feature anything that’s been released before… well, it’s got ‘Salut! France’ on it.
J: That’s gonna be slightly remixed though, maybe with live drums. That was the intention – to make it similar to how we do it live. I think, to be honest, we’ve got difficult first album syndrome! That’s what’s great about Rock Action – they’ve stressed all along that they want this album to be the best record it can be. They want a quality product, and if we turned in something that wasn’t they’d tell us about it!

And what about the market you’ll be releasing the album into: a good thing to have been compared to, say, Battles?
G: I feel like – not being funny – I don’t know all that many bands that are too similar to us.
J: Someone said something about Battles to us before.
G: Yeah. Someone at a show said we were Glasgow’s answer to Battles.

I read in the Metro words along those exact lines not so long ago.
J: Aye, it was in a paper – they said that album tracks were hinting at a Glaswegian Battles. There’s this one song with slightly Latin rhythms… I guess we will get hit with ‘this band sounds like’… or, worse, ‘This band sounds like this band covering this band… erm… on drugs’. Y’know, that old NME thing. But, we can’t really blame other people for being lazy, as we’re pretty lazy ourselves.

Battles, as we’ve established, have their ‘Bez’ cymbal… any ideas for your stage show?
J: Have you seen Purple Rain? Prince’s drummer has a light in the bass drum. I SO want that. Every time I hit it. Actually, I wouldn’t even see it. BUT, obviously the visual thing is something that we’re trying to work on, as we’re only starting to think of ourselves as a live band. We don’t really gig that much, y’know, so… I guess that’ll have to change next year. A lot of this – doing the Underworld tour – is about us diving in at the deep end and sorting ourselves out as a live band. As a band we’re sitting pretty tight, impressively so. Well, I’m impressed! And… erm… I’m just talking shit now…

Errors’ as-yet-untitled debut album will be out early 2008 via Rock Action; their MySpace – where tracks can be heard and gig listings seen – is here. A special Drownload of their ‘Hans Herman’ single is available now by clicking here. It was previously unavailable for download, and its 7" run sold-out ages ago.