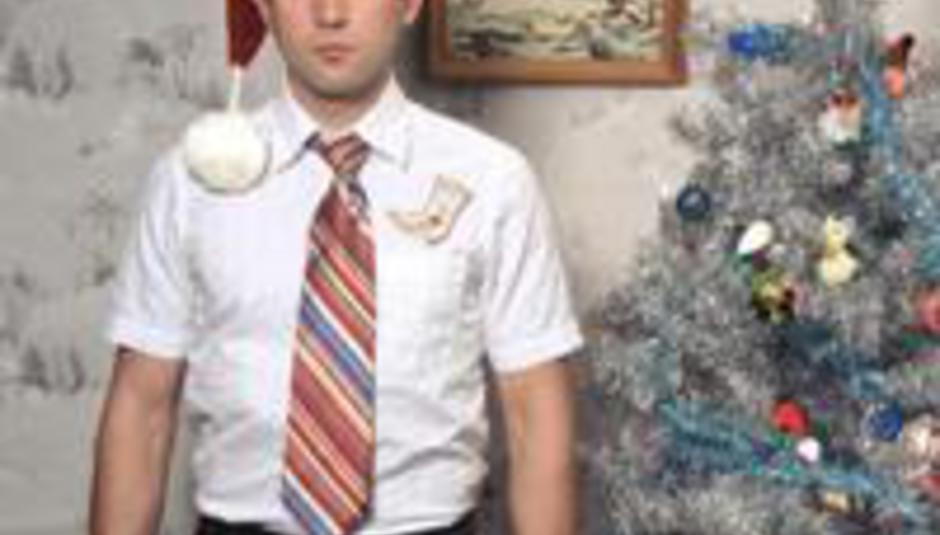 Sufjan Stevens: bird watching yes, 'Away In A Manger' no

Sufjan Stevens: bird watching yes, 'Away In A Manger' no

You might not think it to look at him, but right now Santa Claus is the darling of the indie scene. Christmas, It would seem, has reached sufficiently epic proportions of naffness to be deemed ripe for co-option by the kitsch-loving ne’er-do-wells of the alternative scene.

Last year’s ‘Christmas Reindeer’ download single from The Knife has this year been followed by a clutch of like-minded souls all searching for the right mix of doe-eyed innocence and affectionate irony with songs of their own, from The Killers to Eddie Argos and Frightened Rabbit.

Meanwhile we’re stuck in the distended belly of a seasonal beast whose shadow is cast over the best part of three months of our calendar year - who better, then, to slay the dragon than Christian wunderkind Sufjan Stevens? His Songs For Christmas boxset, originally conceived as a series of annually-recorded EPs to distributed as gifts among friends and family, was made available as a limited release by Rough Trade last year, and was given a general release in November this year. Stevens said the songs were written in the hope they might help him regain a sense of what Christmas is supposed to be about. Has he succeeded in that aim?

"It’s definitely allowed me to approach the season with a personal kind of tradition which is songwriting and given me an allowance to create my own Christmas experience. I think that’s one of the privileges of adulthood, like once you move out of the house and you’ve worked through all your inhibitions and bad memories about Christmas with the family."

- - -
Christmas always seemed really overblown to me
from a religious perspective
- - -

All of which sounds a little ominous, but Stevens’ alienation from the experience actually derives from familiar gripes about financial exigencies:

"When you come from a big family like I did, there’s an incredible economic burden at that time of the year and it becomes impossible to meet everybody’s expectations. I think that really impressed upon me in a negative way because I began to really perceive Christmas as being about people spending the money they didn’t have. I think that’s true in the commercial realm, it’s a chance for people to tax themselves as much as possible, but [with Songs For Christmas] it’s been about doing something which costs nothing which is songwriting, which is kind of an abstract gift."

Songs For Christmas is also consistent with Stevens’ body of work in its engagement with a subject frequently scorned or reviled as having a negative impact on society. I ask him if he thinks of his work as being informed by a Christian sense of duty.

"Well ‘Christian duty’ is a very heavy term, I don’t think I want to get near that one! But I definitely think the initial exercise was extremely dutiful, maybe a little misguided and not without ulterior motives. But it’s become something else now, it’s an annual habit that becomes a meditation. The older I get the more inclined I am to recognise the seasons - everything moves in cycles and Christmas is that one time when we become extremely aware of the cyclical nature of our lives. It’s about new life and starting over.

"Traditionally Christmas wasn’t really an important holiday, I think the bigger holidays are Easter, Pentecost and Lent. These things I think are more ripe with religious meaning, whereas Christmas is just – I mean it’s a very consequential event obviously, the incarnation of God – but it was just the beginning of a story, and the real narrative of Jesus is about the last two years of his life, so Christmas always seemed really overblown to me from a religious perspective."

Most recently Stevens’ time has been devoted to composing a 30-minute, instrumental classical suite commissioned by the Brooklyn Academy of Music, which debuted on a three-night run at the Academy last month. Given a brief to write about anything to do with Brooklyn, Stevens opted unusually to write a piece about the Brooklyn-Queens Expressway, an inner-city link road famed for its inaccessibility and rush-hour gridlocks. Perhaps surprisingly, the Academy was receptive to the idea.

"They were supportive from the beginning," says Stevens. "I thought they wouldn’t like the idea, because it’s an eyesore; I mean, it’s a real injury to the landscape of Brooklyn and not something you would look to for creative inspiration necessarily."

- - -
Right now I don’t want to work too much. I’d like to go to Australia… I’m really into bird watching and they tell me it’s really good over there
- - -

Nonetheless, Stevens felt compelled to eulogise this monstrosity of urban planning, an urge he chalks up to an abiding fascination with cars, albeit put in their proper, socio-economic context as opposed to the overgrown adolescent ardour of Jeremy Clarkson:

"I’ve always been obsessed with the automobile. I was born in Detroit where my uncle worked for General Motors for years so I grew up in the shadow of the car industry. The BQE pretends to be a roadway for commuter traffic but it’s really one big roadblock, it’s like in an effort to get people moving quickly they’ve built a series of obstacles that separate neighbourhoods and create congestion and pollution. It was never really up to code and as soon as it was finished it had to be restored because it was in such disrepair. And so it was planned to do something for the borough of Brooklyn and yet all it did was destroy the place. Robert Moses (controversial urban planner responsible for developing the project) did a lot of good things but unfortunately it was a trend in those days to do away with all the old antiquities and bring in these new urban projects. Everything was done to compensate for the automobile industry; every city was built up to accommodate the automobile and was ultimately destroyed by it."

Obviously cars and transport generally are central motifs in the American songbook, but Stevens’ sensitive approach puts a new and environmentally conscious spin on the tradition:

"Any American has lived-in experience of automobiles in the context of the road trip; every family takes vacations in their cars and they’ll be driving over a period of days for long distances, it’s just a part of growing up here because of the vastness of the landscape. We don’t have the proficiency of mass transportation you have in Europe, and the car is like a symbol of independence and power. Even today in America all cars are sold as if they were horses, they are meant to persuade us they will give us more power; it’s all about the performance of the vehicle and we don’t really think about things like fuel economy."

Following the meticulous arrangements of this latest work, Stevens’ ambitions for the near future remain hazily indeterminate for the time being:

"My work is premeditated, it requires a great deal of preparation, time and energy and it’s not something I enter into lightly. It’s tough because I’m drawn to so many things, I have this obsessive compulsive disorder where I’m easily distracted. But right now I don’t want to work too much, it would be nice to slow down a little. I’d like to go to Australia, I’m doing some shows there in January… I’m really into bird watching and they tell me it’s really good over there..."

What with his recent endeavours and his much-publicised 50-state project, which may or may not be ongoing, Stevens seems to be advancing a peculiarly high-concept brand of folk, but in speech, at least, he chooses to downplay those aspects:

"It just seems to be the way I work, I don’t really think of it in terms of a concept. It’s more intrinsic than that really. I work in a very vast sort of language, but every song is really about me personally and my lived experience."

- - -
I hate ‘Away In A Manger’. It’s just so maudlin and sentimental. At least the commercial Christmas songs don’t have any pretence about them
- - -

Certainly the key to the successes of his widely-acclaimed ‘state’ records have been their ambitious mix of the political and the personal, the sweeping and the slightly arcane. We live in a culture saturated with images and stories about America, but more often than not it’s a uniformly one-dimensional depiction. Stevens takes an unorthodox approach to American history.

"I read history very suspiciously. It requires a great deal of self-confidence and imagination to put down these events, and in any instance there are always revisions and fabrications, it’s just storytelling really. I think that America is about codifying a lie, we’re a young and immature nation founded on the thwarting of old cultures and we devote a lot of time to creating this glorifying fabrication. We don’t have the same rich history as in Europe and we’re foster children really, a nation of immigrants. But I think that lack of history is a liberating thing, like I don’t have to suffer the sins of my Lithuanian fathers because I’m severed from them culturally and emotionally."

Suddenly aware, Stevens enquires as to which publication he’s being interviewed for and whether we shouldn’t change the subject to something a little lighter. After reassurances as to the highbrow nature of DiS make no headway with the man, the tack is hastily changed.

What, we wonder aloud, are the worst Christmas songs of all time?

"They’re all so depressing," muses Stevens. "But I especially hate ‘Away In A Manger’. It’s just so maudlin and sentimental, at least the proper commercial songs don’t have any pretence about them. I mean, I’ve written a lot of sentimental songs but I like to feel Christmas music can be intelligent and emotional and mysterious, and I think the pervasive culture has destroyed that, it’s more about economics."

Perhaps one day one of Stevens’ own songs might be absorbed into the Christmas canon?

"I’d love that to happen, and that’s probably a secret motive I had for doing it, but it’s so unlikely because it’s such an institution now…"

Fair enough, you might think, but hey - if it worked for Mariah Carey, Sufjan Stevens can dare to dream...

Songs For Christmas is out now on Rough Trade; Stevens’ MySpace can be found here, for tour dates and more information and the like.