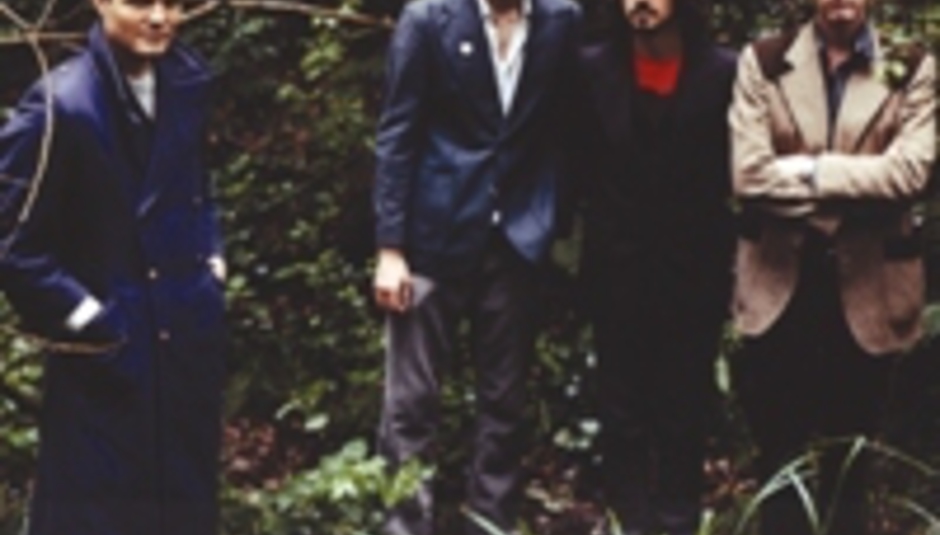 Traipsing across Soho in search of a quiet spot in which to conduct an interview, you get the sense of a landscape ripe for harvesting by One More Grain with their eccentric character studies. It’s a rain-slicked demi-monde teeming with individuals on first-name terms with destiny; the haves and the have-nots, the coulda-beens and the could-still-bes, every one with tales to tell and most of them all but falling off their barstools to relate them in beery-breathed detail.

Fate, as it turns out, will be dealing us a couple more queer hands on this particular evening. First, the press seems to have descended en masse to the band’s gig at Madame Jojo's, including comedian and noted OMG devotee Stewart Lee, appreciation of their brass-drenched musings apparently reaching some kind of critical consensus. Second, their frontman Daniel Patrick Quinn, a Lancastrian émigré currently residing in the capital, used to attend the same school as me. Small world...

Hello! I was worried for a minute there you might have bullied me back at school or something...
Daniel: Nah, I thought you looked familiar though... I used to bully a guy called Leroy but we’re mates now. He’s pals with Stephen Hawking.
Andrew (Blick, trumpets, sound treatments): Because you put him in a wheelchair?
D: …

Riiight. What’s on the agenda for the band in the immediate future?
D: We’re doing some traditional songs for a new 10” we’re putting out. We’re doing ‘Scarborough Fair’ which is a bit boring I suppose, and ‘Giriama Wedding’ which is a traditional wedding song I found on this album called Witchcraft And Ritual Music on the Nonesuch Explorer series. World music before it was called world music, he he. The other one is a song Jonathan Richman recorded using a microphone in his hallway; it’s called ‘South American Folk Song’.

You get lumbered with comparisons to The Fall quite regularly, but your music seems to operate more like jazz in that there’s often a central motif and you kind of play around with that. Do you consider yourselves an improvisational outfit?
Merek (Cooper, bass): We are and we aren’t. Dan has a philosophy about playing too much and I understand that because often when something becomes too polished it becomes boring. It’s like that song on The White Album (‘Long Long Long’) – there was a wine bottle on the speaker which resonated with same frequency as the chords Paul McCartney was playing on the organ. I like that.
D: I think we’re all interested in minimalist music. Less is more in so many cases – don’t use two chords unless you can justify the second one. It’s just boring and it doesn’t allow for improvisation. The smallest textural changes can feel massive. I think we’re all big fans of Steve Reich, Can, Spacemen 3…

The characters on the Isle Of Grain record seem to be very much products of their environment – is that an aspect you tried to play up?
D: It’s always very environmental, I’ve tried to give the songs that element of psycho-geography. Or at least that’s what the critics are calling it. It’s funny, I only ended up being a lyricist because I couldn’t find anyone else to do it. I actually at one point had a band with Kele from Bloc Party. We were both really into Suede and that’s how we met, but I didn’t think he was much of a singer.

Did your experiences as a Northerner moving down to London inform the record in that sense?
D: Yeah, coming down here for the first time it was hard to believe the North ever existed, but now I feel out of touch with people when I go back up there… The UK is just incredible in terms of its flora and fauna for such a small country.

There seems to be a lot of interest surrounding the band at the moment. Where are you hoping to take things from here?
D: The goal for One More Grain is to make each recording more experimental but also more commercial than the last. There’ll be more chord changes but also more textures in there I think.
A: When things start to happen for a band it becomes incredibly difficult to actually start writing new material, which is why so many of them fuck up the second album.
D: Of course, Andrew’s got a whole history which none of us can compete with…

Something you want to share with the class, Andrew?
D: He was in a band called Octopus, they got signed to Food Records.
M: He just nipped into the toilets at (legendary Britpop dive) the Good Mixer and they signed him before he could do up his flies.
A: We were on The Big Breakfast, we were interviewed by Zig And Zag. I was incensed to discover breakfast TV wasn’t filmed at breakfast. On which bombshell we’ll take our leave of One More Grain; in the meantime we’d urge you to check out their very fine recent album, Isle Of Grain (review), available through White Heat Records, and to get yourselves down to one of the following forthcoming dates: