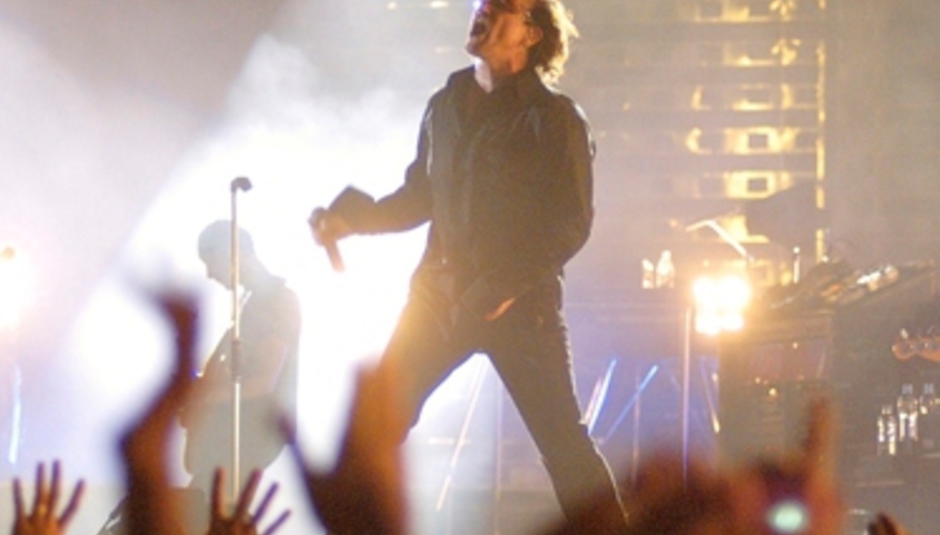 Freddie at Live Aid, David Byrne and his baggy suit in the never-bettered Stop Making Sense or Derek Smalls getting trapped in a pod on-stage during This is Spinal Tap. A band’s work (even the fictional ones) can traverse the gap from memorable to iconic in an instance if they’re at the right place, at the right time, with a camera trained on them.

Obviously a band with one eye firmly placed on their entry in the rock history books, U2 have long embraced epic, grandiose and occasionally ridiculous gestures in their roughly 30-year, globe-spanning career. It comes as no surprise then that instead of releasing a normal concert film, they had to go and make a 3D one during a stop in South America on their recent Vertigo tour.

Is it the future of concert films? Who knows…but simultaneously intrigued and terrified by the thought of a 20-metre-high 3D Bono, we recently attended a press screening of the film at the London IMAX (initial news report here) and came back with the following minute-by-minute account of what transpired in front of our eyes over the course of 80 minutes. 18:51 –Announcer gives us press quotes and information about the film. Warned that a photographer from The Times will be taking a few photos of the audience during start.

18: 55 – Opening includes jump shots of people rushing into stadium with a voice in the background murmuring the words “Everyone”.

18:56 – Opening chords of ‘Vertigo’ are heard. Bono appears in silhouette. The waving 3D arms of the crowd projected onto screen give small shock.

19:02 – Woman sitting next to me starts clapping at the end of ‘Vertigo’. Stops suddenly when she remembers she’s not at an actual gig.

19:06 – On-screen crowd cries out for Bono. Sound like they’re at a religious service crying out for salvation. Disturbed by implications of this.

19:13 – Image of Bono projected on a giant screen behind the band. Decide to label this the po-mo Bono moment.

19:22 – Bono puts on a bandana with a Muslim crescent, Star of David and crucifix drawn on to it during lead up to ‘Sunday Bloody Sunday’…he’s at it again.

19:26 – Bono angrily yanks microphone from stand and gets ‘serious’ during lead up to song climax.

19:28 – Close up of Bono making a cupping hand motion. It looks like he’s trying to stroke my head when shown in 3D.

19:32 – Bono places bandana over eyes. Slowly walks out blindfolded onto stage extension that snakes into crowd.

19:39 – A declaration of human rights is projected behind the band while they are read aloud by an off-screen voice. Woman claps.

19:42 – Wonder how much hair product Larry Mullen must use to kept his ‘wet-look’ hair slicked back after almost an hour of drumming.

19:43 – Screen cuts to a shot of the audience, revealing numerous topless men sitting on their respective friend’s shoulders shouting for Bono. WTF?

19:46 – Witness Bono inexplicably caressing Adam Clayton’s face during ‘Where The Streets Have No Name’.

19:52 – Band play ‘One’. Recall that my first girlfriend when I was 12 loved this song. Cue thoughts about where she is now.

20:00 – A stream of random words and text starts floating across screen.

20:07 – Woman next to me starts to quietly sing along. More clapping.

U23D is released on February 22. Check out its website here.