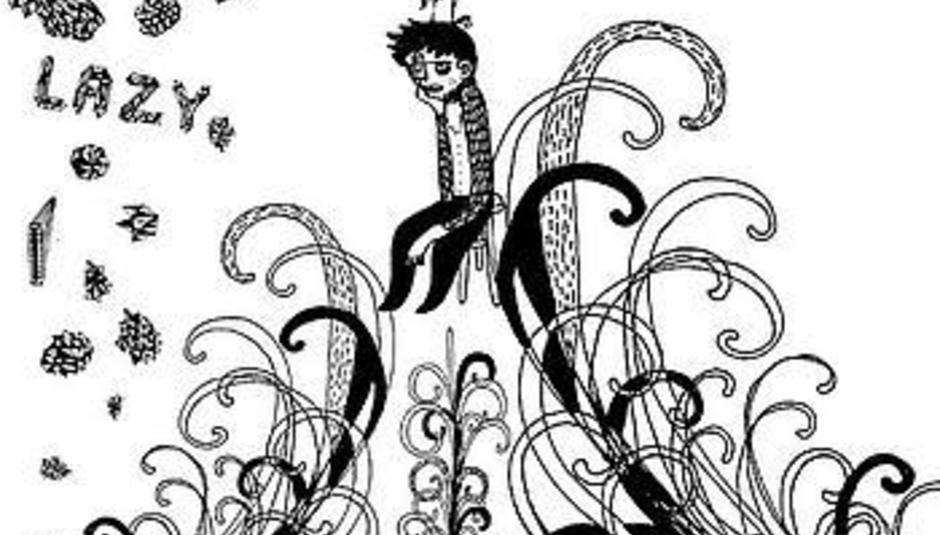 SINGLE OF THE WEEK:

Ipswich-spawned emcee Dels muddles old-school percussion with 8-bit rave beats to create modern hip-hop that’s dark with menace but also rich in potential. This, the 23-year-old’s debut single proper (the track ‘Line After Line’ has been doing the YouTube rounds for a while), is a collaborative affair with Hot Chip’s Joe Goddard, and across two tracks suggests that its key creator is anything but lazy – engrossing wordplay and a playful approach to composing the all-important beat-drops alludes to the fact that there’s a major talent developing here. With further link-ups with Goddard planned, Dels might be another Roots Manuva in the making; even now, on this evidence (particularly with regard to the b-side, ‘Myself Malfunction’), he’s at least the ability to emulate Canada’s Cadence Weapon for UK audiences.

No video is available for ‘Lazy’, but the track and its b-side can be heard on MySpace
- - -

Kate Nash – ‘Merry Happy’ (Fiction)
Single four from Made Of Bricks is no ‘Foundations’, but with prolonged exposure this writer, at least, is beginning to come around to Kate Nash’s cheery melancholy. ‘Merry Happy’ does what it does simply and effectively – it’s a pretty little piano-led pop song that’ll only divide listeners over those vocals. Chalk ‘n’ cheese, innit? And I well like cheese, me.

Supergrass – ‘Bad Blood’ (Parlophone)
The ‘Grass continue their glam-rock stomp of late with the second single from their Diamond Hoo Ha LP, their sixth full-length since the all-conquering I Should Coco way back when. While the band’s glory days are long gone – their moody self-titled third album effectively halved their fanbase – there’s still something wonderfully fun about the four-piece, and ‘Bad Blood’, while as taxing on the grey matter as watching Sesame Street (do click that link, please – Ed), is a perfectly enjoyable radio-rock number.

Utah Saints – ‘Something Good ‘08’ (Data Records)
Oh, you remember – she just knows that something good’s going to happen. But now it’s a little faster, a little jauntier than it was in the ‘90s, and comes with a booties in t’boozer video. Refresh your memory if you must below.

Gabriella Cilmi – ‘Sweet About Me’ (Island)
She’s been supporting Sugababes recently, and with ‘Sweet Like Me’ Australian starlet Gabriella Cilmi begins her assault on the UK charts at the most perfect time. Duffy and Adele might be celebrated as youthful carriers of torch songs must soulful, but at just 16-years-old (although she looks older), this big-voiced newcomer could well steal their thunder before the year’s out. The Winehouse comparisons will grow to annoy her, but Cilmi’s doing herself no favours in said respect by belting out great vocal performances like this.

Yeasayer – ‘Wait For The Summer’ (We Are Free)
Re-recorded for standalone consumption (get the original on their brilliant All Hour Cymbals album), the Brooklyn four-piece’s second single proper is a winning mash-up of weirdo-mysticism and accessible nostalgia – lyrically recalling childhood days of adventures outside of parental attentions while gleeful handclaps propel the piece to a great sing-along chorus. The video’s excellently loony – check it out here. If MGMT have prickled your fancy parts recently with their ‘Time To Pretend’ single but you’re yet to hear Yeasayer, here’s one splendid opportunity. One of two almost singles of the week.

Various Productions vs. Dave Cloud – ‘Puff Rider’ (Fire)
This lunatic seven-inch being the other. Truly defying sensible analysis, this two-tracker offers a brace of takes on the same ‘song’, the only parallel being the demented lyrics – about some character called the ‘puff rider’, presumably a pot-head loon who likes a scrap now and then – from Nashville singer Dave Cloud (do click that link, please – Ed). Bizarre, terrifying, beyond comprehension – this piece o’ crazy-ass wax needs to be bought by you. I worry what Dave would do if he found out you’d passed on it.

Fanfarlo / Sleeping States – ‘Harold T Wilkins’ / ‘Call Me’ (Felt Tip)
Two of Britain’s loveliest lovely bands deliver two lovely songs on a lovely split single. Just lovely, really. (If pressed, the Sleeping States side is the better of the two purely for its crushing lyrical desperation, the “call me” delivered with heart-popping urgency.) This came out last week and should have featured in the round-up of seven days ago. Sorry.

Panic At The Disco – ‘Nine In The Afternoon’ (Decaydance)
It’s ‘Mr Blue Sky’ by a band that isn’t The Hoosiers, which can only be a good thing. If this is what emo is in 2008, then someone should re-package Out Of The Blue with skulls and fringes all over its cover ASAP.

Jaymay – ‘Gray Or Blue’ (Heavenly)
Strum-strum goes another average singer-songwriter with an average line in averagely love-struck lyrics. Somewhere, a compiler of a distinctly average All Woman / The Best Mothers Day Ever album makes a note. In average handwriting. If this song was by a guy nobody would give a single, solitary, below-average fuck. But she’s pretty, and sorta kooky, so…

The Whip – ‘Trash’ (Southern Fried)
Speaking of below-average stuff, will someone kindly tell Manchester’s The Whip that the reason Klaxons succeeded with their dumb-ass pop-rave beats ‘n’ t’ing was ‘cause they wrote thoroughly decent lyrics to go with all the sirens and the clatter and clang and whiizzzzing. The Whip’s best effort here: “I have become the trigger for your gun”, over and over and over. Fucking Kasabian are better than this, and they’re fucking gash. This lot “want to be trash”, but this single isn’t even good enough to be left in a bin. Someone, after all, might pick it up. Burn it.

Moby – ‘Alice’ (Mute)
He’s done punk, sold out to every car manufacturer that’s ever had an advertising budget, and got really into tea, but does anyone actually need Moby in their lives today? Clutching to some sort of modern relevance, here the no-haired techno fellow drafts in members of Nigerian hip-hoppers 419 Squad, no doubt with an eye on cashing in on the M.I.A. dollar. But ‘Alice’ is so lacking in anything nearing vibrancy that the whole track’s over before you’ve answered that opening question. “Not especially,” since you were still wondering.

Sparkadia – ‘Too Much To Do’ (Ark)
Sounds like Jens Lekman playing with Jimmy Eat World as his backing band, and the Australians have just toured with the latter. The PR blurb references Lee Hazelwood and Scott Walker, and there is something defiantly ‘classic pop’ about ‘Too Much To Do’. One radio crossover and they’ll be massive if this is anything to base their catalogue as a whole on. Refreshingly pleasant.

Bricolage – ‘Footsteps’ (Memphis Industries)
Someone, somewhere, is falling in love to this perfectly executed Postcard-hued Scottish indie jangle right now, but these ears aren’t moved, and these dancing shoes remain still. Nothing bad here, but nothing particularly grabbing either. Sorry Bricolage.

Tom Baxter – ‘Tell Her Today’ (Sylvan Records/EMI)
So this is Tom Baxter. I’ve seen the posters and read the halfway positive album reviews, but this is the first time I’ve heard the Cornish-bred singer’s lacklustre acoustic fluff that only complete tossers with zero appreciation of the potential emotional power of pop music could ever find affecting. The last time too, then. Four whole fucking minutes of my life I’ll never get back. Bastard.

Samantha Marais – ‘First Days Of June’ / ‘Please Take Your Time’ (Butterfly)
About a zillion times more gorgeous sounding than Jaymay’s whateveritwascalled but undoubtedly produced for a fraction of the cost, this is pretty-pretty folk with a not-kooky female lead that’ll sooth your simmering rage down a treat. The perfect remedy for those post-Tom Baxter blues. Bastard.

Billy Bragg – ‘I Keep Faith’ (Cooking Vinyl)
Bragg teams up with Robert Wyatt and The Small Faces’ Ian McLagan to craft one of the week’s more unexpected highlights. Bragg turns in a great vocal, and the Hammond-driven backing to his love-soaked lyrics resonates with a truly timeless quality. Apparently this is a sing-along live favourite – I for one would struggle to keep up, what with the big lump this leaves in the throat. Awwww.