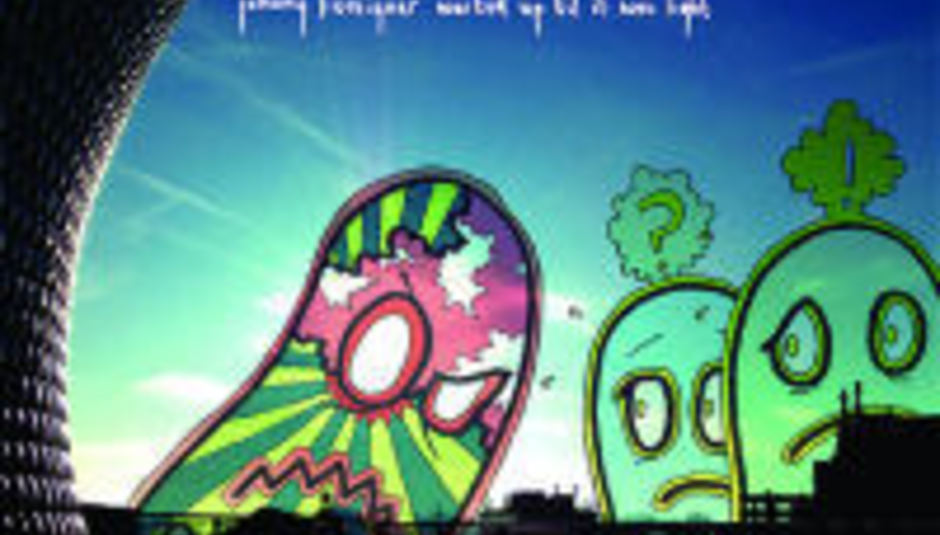 Track-by-Track: Johnny Foreigner's Waited Up 'Til It Was Light

Track-by-Track: Johnny Foreigner's Waited Up 'Til It Was Light

Thanks, Alexei. In advance of the release of their already-causing-a-stir debut album Waited Up ‘Til It Was Light (pictured), due out on June 2, DiS invited the Johnny Foreigner frontman to pen us a guide to the LP.

‘Lea Room’
The real Lea Room is our tech / driver / emotional punch-bag. I haven’t been to a proper fireworks night for ageeeees; I used to be well scared of sparklers. I tried to write the song so I barely had to play guitar but it didn’t work out so well. Also, it’s got my ‘spong’ guitar effect at the end which I’ve been searching for since I was 15.

‘Our Bipolar Friends’
“So many shows and no-one turns out” is paraphrased from a Hold Steady lyric in ‘Curves & Nerves’. In the video what never got made I was going to hold up a little picture of [Hold Steady frontman] Craig Finn, it would have been great. This songs a bit about last year’s social craze of declaring yrself bipolar (because being gay or a self harmer or an anorexic is too passé), and also a bit of a dig at the Birmingham music scene; everyone talks of starting something great but never supports anything else. A sweeping generalisation I’m sure I’ll get slayed for by JDTraynor.

‘Eyes Wide Terrified’
‘Eyes Wide Terrified’ is about someone I think I liked and was leaving for America and I hadn’t finished the words until I spent a shitty night at her house two days before we flew out and we had to do a Huw Stephens session and I finished them on the Tube from hers to Maida Vale in a sleep-deprived college-work style. I was briefly obsessed with including “or something” in lyrics. My best Victor Villareal guitar impersonation before the bridge still falls a bit short…

‘Cranes and Cranes and Cranes and Cranes’
“Why’d you wanna live here if there’s nothing but housing” is paraphrased from the words of Shaun Walsh, probably the wisest thing anyone’s ever said about Birmingham’s ‘regeneration’. I’m all for local mythology, there’s precious little colour in our city. Recently when we’ve played this I’m sure [bassist] Kelly sings “night” in a comedy Kate Walsh manner. I don’t know what that’s about.

‘The End and Everything After’
“You don’t stop believing in the band…” is what my friend Chloe told me about why people still obsess over the Manics. The song’s more about us, and a bit about Chow Chow, and a bit about the venue staff we meet and forget who see our little circuses everyday and view them with a vaguely good humoured disdain. Yes. I miss Chow Chow loadssssssssssss.

‘Hennings Favourite’
This is a song we forgot about when my delay pedal broke. [Drummer] Junior insisted we resurrect it so we did and it came out good. The lyrics feel a bit outdated now tho, the pointy shoe brigades have moved on from pretending to be garage rock and don’t really need me to take the piss out of them. I’m scared of playing it live cos I have to do pedal ballet. “The 99th clone” = because clones get weaker and weaker the more you reproduce them. They also extend a vowel in the first name, so my clone would be called ‘Aleexei’ or something.

‘Salt, Pepa and Spinderella’
Coincidence story! This was just going to be a little thing for a Kerrang! session at first. We thought it would be good to pile loads of guitars on the end, then [album producer] Machine had the same idea, so we did. It gets the name cos when we were rehearsing it that’s who we looked most like. Only later did I realise that the chip shop that the song is set in, in Birmingham, is called Salt and Pepper. And and and, when we first got to New York to do the album, the first program on TV we watched was about how hard done by Spinderella was. (Quite.)

‘Yes! You Talk Too Fast’
We’ve recorded this song about a hundred times. We got bored of it and stopped playing it and now we quite like it again. She asked me if she talked too fast and I said no because I didn’t hear her properly. And I always felt bad and that’s essentially what this song’s about. That, and shitty fancy dress club nights… I went to grammar school but I got expelled, so I’m socially balanced. “Attic” / “at it” is from the Urusei Yatsura rhyming dictionary. My non-musical housemate calls it our ‘Blues Brothers song’.

‘DJs Get Doubts’
Three of my friends have asked if this is about them and I said no, but really it’s about all three. When we came to record this, my fingers were all cut up from intense playing, so Machine glued them back together with superglue. The violin part is played by a lovely woman called Megan – she added loads of extra bits with the idea we’d mix and match later. But we pretty much left everything in. Note the Joan Of Arc rip-off door slam at the end of the song.

‘Sometimes, In The Bullring’
The first recording of this was our first single, many moons ago. About the same girl as ‘Yes!’ – I was two songs off obsession… she moved to Cornwall and it took me a month to find out, living in a van as I do. This song gets forced out in Birmingham sometimes, when we’re drunk enough to ignore how unrehearsed it is. I used to sing bits off a Heart Strings song over the end but I stopped when we got more well known cos it seemed cheeky.

‘Yr All Just Jealous’.
The full title used to be ‘…of my Von Dutch hat’, in reference to a dodgy bootleg cap I bought the first time we went to Manchester. It’s about us being a band while all our friends get on in the real world. I used to mention a girl’s name at the end but stopped on account of 1) it was a bit cheese 2) were still on speaking terms and 3) one of our friends had a major crush on her…

‘Absolute Balance’
“You see that girl...” is from ‘Hotel Lounge’ by dEUS, one of the best songs ever written. Tom Barman, the singer, stole words from REM for the album that song’s on, so I felt I was more carrying on a tradition than stealing art. The rest of the words are mostly vomit-singing I’d just make up on the spot about the gig we were playing, so it was a bit weird having to make stuff up for the album that was like, a conclusion... record collection, shoes, haircut, says everything about someone I’d want to know.

‘The Hidden Song at the End of the Record’
This was supposed to be slightly more hidden. Thee oldest song ever, it predates Kelly joining by a good month or so... it’s actually for her, she was having man problems. I don’t think I ever told her. Surprise, Kelly! We nearly killed Junior doing the percussion overdubs; his arms nearly came off, serious. The extra voices are a rush-job choir comprising of our studio crew and their friends; we wanted Los Campesinos! but they got stuck up an airport. Doing the little twinkly guitar was a fucking nightmare cos my intonation was so messed up. I still haven’t got it set up properly…

Find Johnny Foreigner on MySpace here and see them live on the DiS Tour with The Mae Shi and The Lionheart Brothers as follows:

‘Cause we love you so, DiS is offering London-based readers the opportunity to come down to tomorrow’s King’s College show with all the above bands for just a fiver. That’s you, in, three bands for £5*. Not a bad deal at all methinks. All you need to do is click HERE.

Please note that those with pre-booked tickets purchased at the original rate are not entitled to any refund. * Plus 60p booking fee.