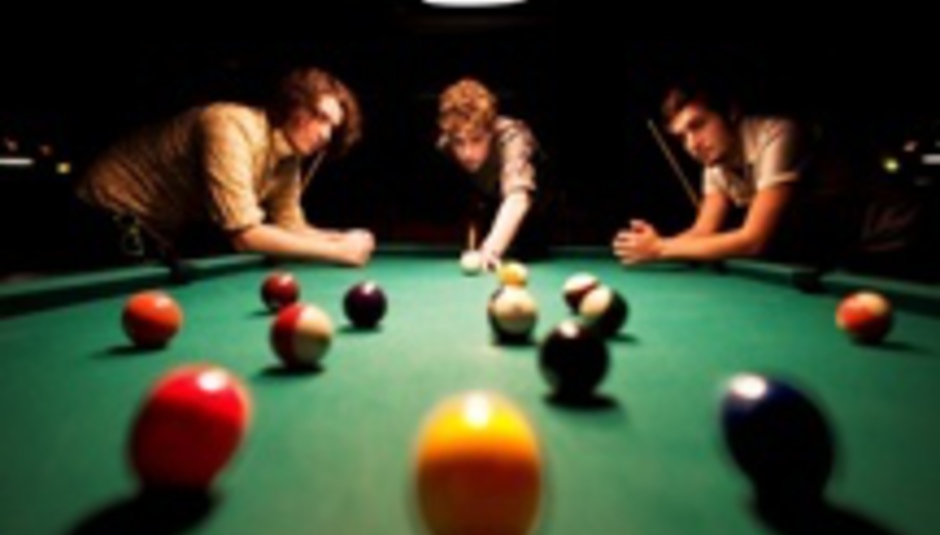 Having already plugged their wares into all the right youth-cultural sockets with an appearance in a New York nightclub scene of C4's ubiquitous Skins and, more recently, an airing in a new series of Orange ads, Toronto upstarts Born Ruffians seem well-positioned in 2008 to tickle the middlebrow fancies of a blog-brained generation weaned on the able likes of Clap Your Hands Say Yeah and Vampire Weekend.

And they’re likeable with it: damnably young and already having attained the kind of musical fluency that forever seems to evade their British counterparts, recent single ‘Hummingbird’ was as effective a showcase for the three-piece's talents as we could have hoped for; a sound that’s equal parts zappy pop smarts and bracing complexity. In addition, the band roped in Animal Collective and Panda Bear producer Rusty Santos to give their debut LP a pleasing, echoey sheen - winner!

Boxes well and truly ticked, DiS hollers down the phone at frontman and guitarist Luke LaLonde while the band is en route to a Manchester show to get the long and short of it...

You’ve been touring with Caribou lately, how’s that been going?
Yeah we’re actually in the van with them now. We’ve toured with them before in the fall, they’re super swell guys.

You’re all high-school sweethearts, so to speak, as players in the band. Any embarrassing cul-de-sacs pursued on the way here?
Not really, it’s been a pretty natural progression with us. We had a bit of luck along the way to get us to where we are.

Do you find that Toronto’s music scene is unjustly neglected at the expense of Montreal's?
It’s hard to say because I don’t read a lot of the music press, especially outside of Canada... I mean the focus on the Canadian music scene came maybe like three or four years ago with the Arcade Fire’s first album and then there was of Montreal, The Unicorns... I thought it was like a fad that kinda fizzled away, a trendy thing for a while... Toronto for me doesn’t really have a sound. I don’t even know if any city has a scene, it’s more like an outsider’s perspective, or at least I think you can only really say what a scene is maybe ten years down the line when you have more perspective on it.

Is Toronto a friendly kinda place?
It’s not really a place you go to for its beauty, it’s kind of a new and boring city. But y’know it’s friendly and it feels like home... I actually like Montreal better if I’m being honest.

Now that the cat’s out of the bag, how much of Red, Yellow And Blue’s sound was down to Rusty Santos’ influence? Parts of it do sound very akin to Animal Collective...
Well I mean they’re a great band, one of the most important of the past ten years I think. Maybe I could hear their influence in the vocal melodies or something but I’m not really sure... I think sometimes you just come to the same conclusions as other bands accidentally, maybe you just share common influences and are drawing from similar pools. But Rusty has a very unique style of recording, like with Sung Tongs... I love the way that record sounds, and I think they lost the feeling of their records when they switched to Feels, you know...

Was it a similar sound you went after when deciding to work with Rusty or was it something else?
It was more that we wanted a distinct sound to our record, we didn’t want one of those full volume studio records that has no feeling or tone to it, there needed to be some dynamics. We kind of just happened into working with Rusty in a way, we were going to work with another guy and it totally fell through last minute. We were coming up on a deadline and our manager had managed a tour with Animal Collective, she called Rusty up and set up a phone interview with us and it went from there.

Are you ever surprised by the names that get dredged up in reference to your band’s sound?
Yeah, most of the time I’ve never even heard of the band people are talking about. With our first EP we had a lot of comparisons to early Modest Mouse records; I’d heard a couple of their new albums which I liked alright but I was never a huge fan.

When you did eventually hear those records could you see where people were coming from?
No, I never did listen to them! I think I was afraid of hearing them to be honest. People bring up new bands every time, but everyone hears different things...

What names should be coming up that no-one thinks to mention then?
I dunno, maybe early Van Morrison or David Byrne vocals-wise, Violent Femmes, Can. It’s hard to hear it the way other people hear it. My guitar is really influenced by Albert Hammond Jr from The Strokes - when I was 16 and first starting to write songs that had a big impact. We’re into a lot of hip-hop as well...

The title of your album refers to the flag colours you’d choose in a country of your own making; however, with a spot of internet research I see that Andorra, Chad, Moldova and Romania have all chosen the same colours – does this annoy you greatly?
Well I was aware that a lot of countries had those colours, we had no intentions to draw comparisons to other countries.

You wouldn’t like to maybe throw in a nice streak of magenta to make it more unique?
No I wanted the primary colours, they’re like the building blocks that everything comes from... But it was just a song I wrote in my bedroom and obviously at the time I didn’t realise I would have to answer all these questions...

...stupid questions?
No they’re not stupid.

That one was.
They’re just kinda hard to answer. Sometimes you don’t really think about what you’re writing and then you have to psychoanalyse yourself afterwards just to get at what you were really trying to say...

Do you think that’s a healthy process?
Sometimes it’s a little painful (laughs).

You appeared in Skins quite recently. Are you fans of the show or was it more a management thing to ensnare the youth vote?
Yeah that was funny, nobody knew the show at all and we went to New York for filming, our manager said “Yeah you gotta do this, it’s a big deal”, so yeah we did it for a bit of exposure in the UK. But the song was edited to shit, it was awful, they went into a totally different part of the song... It was kinda funny though. I still haven’t seen an episode of the show.

Born Ruffians are currently engaged in a short-ish tour of the UK (dates below); you can mooch around their MySpace without fear of restraining order here.