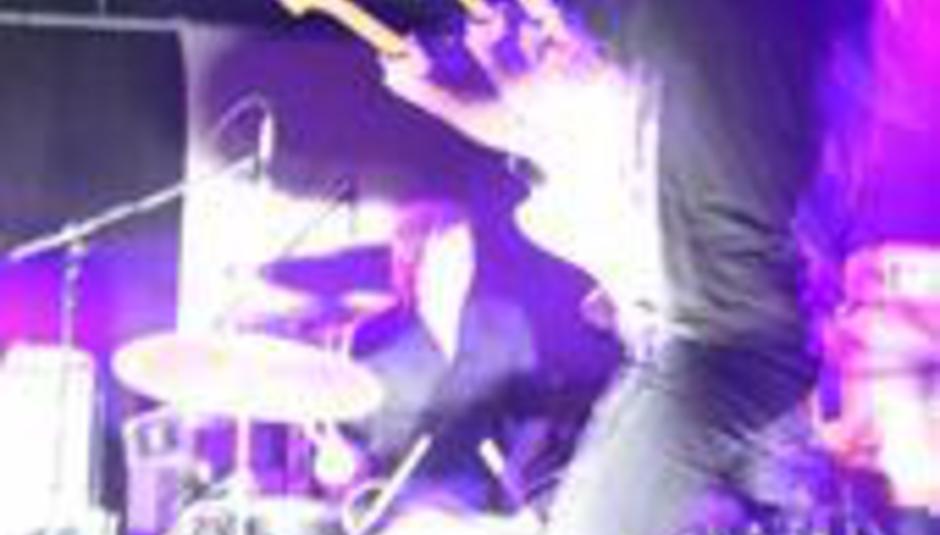 DiScover: A Place To Bury Strangers

DiScover: A Place To Bury Strangers

It may be a sunny Tuesday afternoon in Nottingham at the time of our interview, but for New York trio A Place To Bury Strangers it’s business as usual. At least in the sense that tonight they’ll play one of the most awe-inspiring live shows (Review) many present will ever be fortunate enough to witness.

Beforehand though, DiS is here to meet and greet the three finest exponents of white noise since Krakatau shot its load over a century ago. Comprised of Oliver Ackermann (guitar/vocals), Jono ‘Mofo’ Smith (bass) and Jay Space (drums), A Place To Bury Strangers were initially formed by Ackermann in 2003 after the dissolution of his previous band Skywave. Space and Smith joined soon afterwards to complete the line-up, although the earliest incarnation of the band can be heard at various times during last year’s eponymous debut album, including current single ‘To Fix The Gash In Your Head’. As well as fronting the band, Ackermann also runs his own business, Death By Audio, making effects pedals such as 'Total Sonic Annihilation' and 'Interstellar Overdriver'.

Having spent the last four years playing with kindred spirits such as The December Sound and Ceremony around their native city and its surrounding districts, the band gradually started to gain momentum (and a healthy live following) culminating in a show-stealing performance at this year’s South By Southwest music convention. Since then, it seems everyone wants a piece of the band who’ve already been dubbed “the loudest band in New York” and DiS is no exception…

Let’s start with the loudest band in New York tag you seem to have acquired. How do you feel about that?
Jono: I think it’s silly, personally.
Oliver: Yeah, I mean, obviously it is loud, and we do try and be loud but we don’t try and be the loudest. It’s a bit spineless I think.
Jono: We like a lot of loud music but that’s who we are.
Oliver: I find it quite uncomfortable that we have this absurd title; it’s like a massive weight around our necks that is almost impossible to ever be able to live up to.

I can see why you’d feel like that. It almost makes it the unique selling point of the band.
Jono: Definitely. People always seem to want to talk about it, but what happened was that some journalist in New York said it in a review and then several others followed suit so before we knew much about it, every press cutting or online blog seemed to use that as the definitive description of what we are about. What made it worse was that when our CD came out, the guys who released it (Killer Pimp Records) decided to put stickers on the front of every copy endorsed with the slogan ‘New York’s loudest band’, so from that aspect it has been something of a selling point.

That title has given most musical librarians a bit of a headache in terms of classifying which genre A Place To Bury Strangers should be placed in. Where do you see yourselves?
Oliver: I don’t know. I mean, I personally do not like the shoegaze tag. I guess it’s down to other people how they interpret it, so…

It’s interesting to hear you say that, as fellow New Yorkers The December Sound have also been saying pretty much the same thing recently…
Oliver: It’s not that I’m saying it’s the worst thing in the world to be called shoegaze; I mean, most of the bands I like originate from that whole early 1990s shoegaze scene. But the whole genre has taken on a completely different meaning now and I don’t think it does our band any favours being pigeonholed in with it.
Jono: To be fair, in America, the term ‘shoegaze’ covers a much wider scope of artists than Europe, or at least the UK ever has. I mean here it just seems to mean Slowdive and their associated bands – not that I have anything against Slowdive, they’re one of my favourite bands of all time. But it just seems, I dunno, so predictable.
Oliver: I think it seems to be that anything with a hint of distortion in its sound attracts the label ‘shoegaze’, yet to me there are many other ways of describing the perfect wall of sound, ‘60s girl groups for a start.

Moving onto the record, also called A Place To Bury Strangers: it started out as essentially a collection of demos, the earliest of which were recorded in 2003. Are you surprised that it’s taken so long for people to start paying attention to what you are doing?
Oliver: I think so because I was in a band for nine years before this, from 1994, and there have been times along the way where its seemed like there was almost no hope, mostly making music just to please ourselves. Even at this point of A Place To Bury Strangers I never thought anything was going to come of it. I still like to think that the music we make is more a reflection of what we like to hear personally rather than following any perceived ideal, yet ever since the album came out at the back end of last year, our profile seems to have risen massively. There have been times in the past where I’d thought about giving up making music, but in hindsight I’m really glad I didn’t.

Is that why you started the Death By Audio effects pedal business, which you’re also becoming quite well known for? As something of a creative distraction from making music with the band?
Oliver: In some ways yeah, although I initially started messing around with pedals around 1998. It took me a couple of years to really get to grips with what I was doing and so in 2001 I started Death By Audio, almost by accident as it happens. Word spread around New York about this guy who devised and built his own effects pedals and I got inundated with orders. Everything took off from there pretty much…

Have you had many famous customers buy your pedals?
Jono: I think I’m pretty famous!
Oliver: Yeah it’s been really crazy. I mean, we’ve had people from U2, Nine Inch Nails… My Bloody Valentine recently ordered some…

I notice that you’re going on tour with Nine Inch Nails around the States this summer. Is that how you got to know them, via Death By Audio?
Oliver: I think that’s how they got to know us.
Jono: I think Trent [Reznor] has his finger on the pulse as far as new bands are concerned. They’re taking Crystal Castles out with them for the first part of the tour, then Deerhunter are doing the next leg of the tour, then us.
Oliver: I’ve spoken to him via e-mail quite a few times and he genuinely seems to be into our music, or maybe that should be into promoting new music in general? He’s giving his next album away for free and I think he’s reached a level now where he doesn’t have to pander to what the industry wants and expects. He’s in a position now where he can still make money but completely do things his way, which must be a great thing to say you’ve achieved.

You’re being courted by several major industry labels yourselves at the minute, yet currently remain unsigned. Do you see yourselves signing to any of these labels in the near future?
Jay: There are a lot of really cool labels out there, so I think it’s been quite hard trying to make a decision like that to be honest.
Oliver: Just being in a band gives us lots of things to think about.
Jay: That’s right. I mean there are all sorts of things to take into account, like how cool the other bands on the roster are, how they look after their artists, how well they work with the media and radio… it’s a really hard decision.
Oliver: I think we’re gonna wait until we’ve finished recording the next record and make a decision then. There’s a lot of work we feel needs to be done before then.

You mention the next record. Have you got a batch of songs ready and, if so, how far down the line are you in terms of the recording process?
Oliver: We’ve recorded about nine or ten songs so far, and then we’ve another seven that we’re planning to work on when we go back to the States. We really want to do this album right; the last one was just a collection of songs recorded at different stages and periods of the band whereas we aim to make this sound like a proper album.

You can hear the difference between some of the older and newer songs on the current album. For example, ‘Ocean’, one of the last tracks you recorded, sounds more expansive than, say, 2003’s ‘Missing You’. Would you say that’s a representation of what to expect from the newer material?
Oliver: I’d say that we’re certainly more experimental than where we were back then. I mean, listening to the album now it sounds quite jumbled…
Jono:…Which it is as the songs don’t really follow any chronological order as such apart from the first and last songs on the record being the first and last songs we recorded.

In terms of the songs, what comes first: the music or the lyrics?
Jono: There’s no set pattern. We tend to take everything as it comes.
Oliver: Sometimes the song might be based on some sort of effect we get from the sound. Occasionally it may be based upon a melody, or Jay might have a drum part that may take the lead. I guess it all depends on what combination sounds good at the time. We’re never afraid to scrap anything completely no matter how far down the line with it we are, so if something doesn’t sound quite right we will just start again from scratch.
Jono: There’ve been songs that we’ve been playing together for ages and then we’ll realise that we need to write some more lyrics before we can think about recording them properly.
Oliver: Yeah, sometimes me, Jono or Jay will say something really cool and the three of us will just try and fit into the lyrics of a song. Just like that!

The album A Place To Bury Strangers, containing the current single ‘To Fix The Gash In Your Head’/‘Ocean’, is out now on Killer Pimp Records.

For more information on A Place To Bury Strangers visit their MySpace.