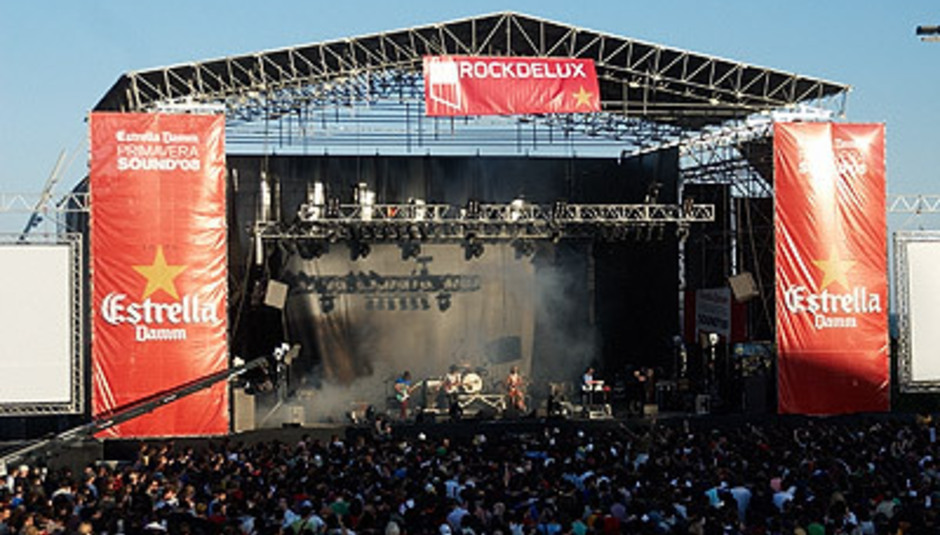 by Mike Diver May 30th, 2008
and Gary Wolstenholme

Between hotel and festival site - one pedestrian crossing - we bump into many a participating artist: yes, that's a dude from HEALTH in the foyer, beside one-half of Fuck Buttons. That dude barking into a mobile? Well, the clock around the neck's something of a giveaway.

Once in, MGMT are closing their set; we loiter with intent before catching, in order: Enon, The Notwist, HEALTH (playing the superbly located Vice/Jagermeister stage, right beside the sea and beneath Parc del Forum's massive solar panel), Public Enemy performing It Takes A Nation Of Millions..., Shipping News and, as the darkness envelops the site, Portishead.

Shame that schedulers have put the Bristolians up against Japanese titans Boris, though; Beth's frail vocals are drowned out by the cacophony coming from the ATP stage. Portishead play the hits, Boris bring the noise, and the latter act triumphs.

The wee hours of Friday morning - this morning - are soundtracked by De La Soul, Vampire Weekend (attracting the audience of the day to the Vice/Jager stage), and Midnight Juggernauts. Somewhere in the middle of all of this British Sea Power deliver a phenomenal set, Explosions in the Sky slow the party down for an hour, and Caribou brings soothing alt-beats to the CD Drome stage.

DiS gets in ridiculously late only to wake up early to process photographs. More, tomorrow; for now, we're off to get tapas and cerveza.

Day one, In Photos