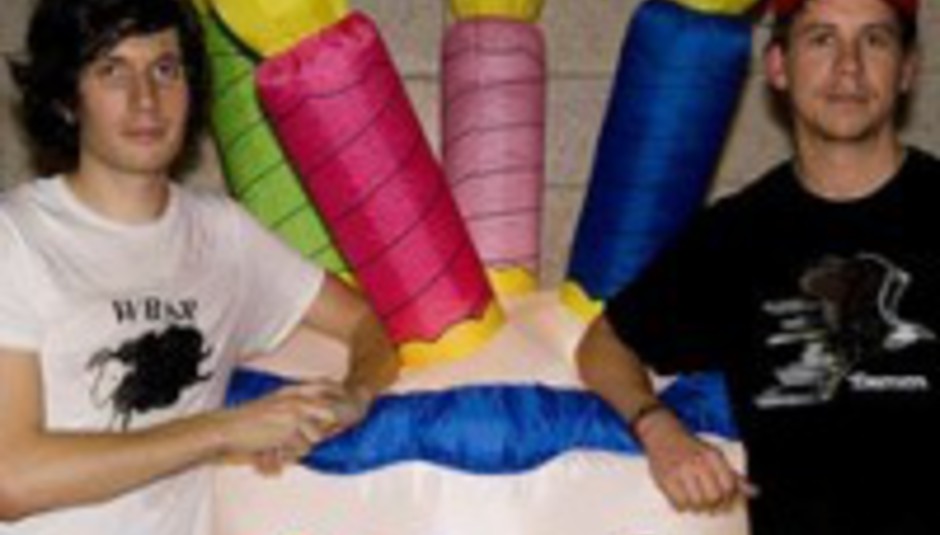 Part two of three sees the less-mainstream artists to have most impressed DiS over the last six months begin to make themselves heard – Los Angeles duo No Age’s debut album proper Nouns has rarely been off the stereo, and Why?’s Alopecia reveals more of its fascinating facets with each listen – and we’ve had many.

Part three will be here tomorrow; part one – featuring Mystery Jets, Foals, Portishead and British Sea Power – can be read HERE. And should be.

Cut Copy – In Ghost Colours (Modular)
Conceptually, a bunch of scraggy antipodeans, who look not unlike members of the cast of Heartbreak High, shouldn’t be making better post-New Order euro-disco than the kids in Berlin or Brooklyn. With In Ghost Colours, though, Cut Copy have managed to create the perfect mangled bedroom party mix that sits somewhere very near James Murphy at his peak of his silky prowess. They also retain a touch of the joyful air of Panda Bear gazing longingly at Brian Wilson’s sneakers, with just the right amount of dizzying epicness. They may unashamedly wear many of their influences proudly on the fronts of their faded t-shirts, but the trio also manage to sneak a few subtle references to their heroes in there, too. (Talking Heads, Joan Armatrading/Phil Collins and Suede, surely?) In Ghost Colours is one of the year’s surprise treats so far, and a definite contender for album of the summer. Sean Adams
DiS review
MySpace

Video: ‘Hearts on Fire’, from In Ghost Colours


No Age – Nouns (Sub Pop)
Blistering noise-pop, FM stadium riffs shackled onto heartless drones, Dean Spunt’s mechanical percussion grinding in the back, his haggard vocal at the fore: Los Angeles duo No Age decided it was time to churn out some hits after the release of their magnificent EP collection, Weirdo Rippers (review). Following on from their previous hardcore adventures as Wives, Spunt and shredder Randy Randall spat out a record that stank of youthful revolt; the arching three-chord thrashes of Urinals’ piss-stained punk, bristling Surfer Rosa hooks and lyrics drenched in a vat of adolescent angst (oh, The Smell!). Both blissful and bombarding, Nouns truly is a teenage riot. Samuel Strang
DiS review
MySpace


Bon Iver – For Emma, Forever Ago (4AD/Jagjaguwar)
Given the legend-strewn fanfare with which Bon Iver arrived - lovelorn folkstrel holes up in the snowy woods to document his heartbreak - it would have been easy to dismiss Justin Vernon as a one-trick acoustic pony, peddling break-up songs for sensitive indie types. But For Emma, Forever Ago quietly delivered so much more than that, getting its tiny first run bumped up to a 4AD signing and album-of-the-decade status in all the music magazines. He's even been played on Grey's Anatomy. But that's OK. By turns gut-achingly emotional, beautifully whimsical and genuinely heartfelt, this album deserves to stay buried deep under your skin. Rebecca Nicholson
DiS review
MySpace

Why? – Alopecia (Tomlab)
By this third album a fully-functioning band proper, their moniker of choice long expanded from covering ex-cLOUDDEAD member Yoni Wolf’s lonesome endeavours (debut Oaklandazulasylum, recorded solo, was released in 2003), Oakland trio Why? realised their ambition of categorical ambiguity with Alopecia, an LP of understated grace and compositional nous that successfully skirts about the tails of a dozen or so pigeonholes, never once nuzzling up to any. Affecting in a way suggested by the preceding Elephant Eyelash album, now in effect at a much higher level, this record should be the one that finds Wolf recognised as a wordsmith of great ability, as Alopecia winds lovelorn vignettes into absorbing patterns, revaluating the minutiae of the mundane into revelational tales of utmost fascination, of touching tenderness. As appealing to fans of Anticon hip-hop as it is admirers of the late Elliott Smith.
DiS review
MySpace

Video: ‘Song Of The Sad Assassin’, from Alopecia

Coming your way tomorrow: four more essential albums of 2008 so far, completing our not-so-dirty dozen. Then, tracks of the year to date and recommendations from artists featured across the week’s series of articles, as well as a look at what goodies are yet to be released. Fun times, fun times.