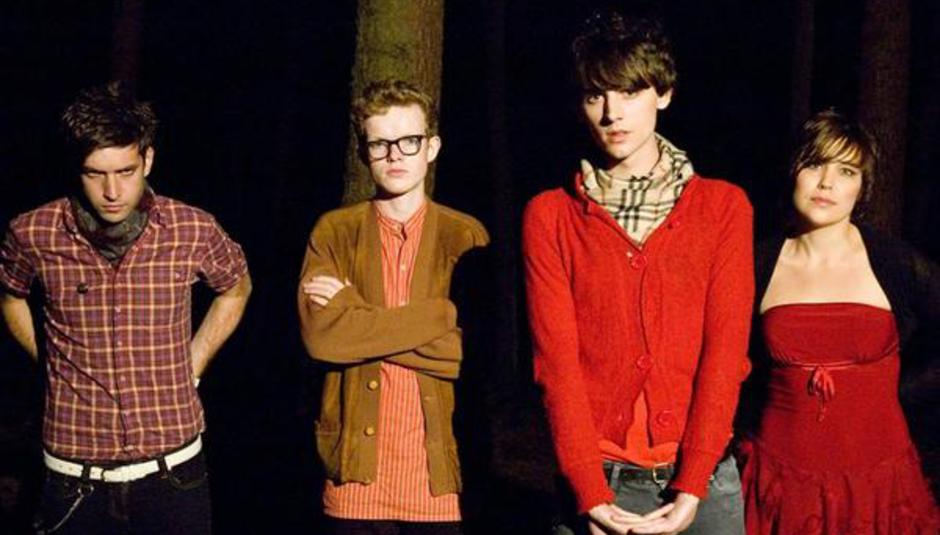 Another mixtape for your listening and viewing pleasure, this time from Leeds-based outfit - and longtime DiS favourites - Grammatics. Rather than leave the selections to one member, they've each chosen some tracks and compiled them into one long list of audio goodness. Remember, also, that they're playing our In The City showcase gig this very evening at Manchester's Night & Day (more info here) - be there, or miss out.

The Icarus Line 'Up Against The Wall, Motherfuckers'**

Featuring both the filthiest bass line and most thrilling drum fill of all time. This is peak Icarus line and perfect 'hyping yourself up to go out' music. Also, just discovered this: http://en.wikipedia.org/wiki/UpAgainsttheWallMotherfuckers. *OB*

- - - Video: The Icarus Line, 'Up Against The Wall, Motherfuckers'

"There is no morphine/I'm only sleeping/There is no crime to dreams like this". One of many that could be picked from Bubblegum, lovely backing vocals from Chris Goss too. *OB* (YouTube)

OK, I tried not to, but this plays on constant loop in the jukebox of my brain. With all this talk of records being over-compressed I worry that there won’t be too many more that kick in like this. *OB* (YouTube)

Cursive 'Excerpts From Various Notes Strewn Around The Bedroom Of April Connolly Feb 24, 1997'

I'm torn between this and 'Staying Alive' (surprisingly NOT a Bee Gees cover) but 'Excerpts...' wins because a) It's rare for what is arguably a band's greatest song to be hidden away on a somewhat obscure split EP (with Eastern Youth) and b) Feb 24th is my birthday, so it's somewhat coincidental that this is one of my favourite songs. *OB*

The song that sent me head over heels about Idlewild. The second track from mini album Captain, it's hard and soft at the same time with loads of crunchy guitars. Just brilliant! *DO* (YouTube)

I used to DJ this and a lot of people didn't have a clue what was going on, especially in the middle. One of the best riffs of all time though. *DO* (YouTube)

My favourite track off Modern Life Is Rubbish. It's inventive, the intro's great, there's a cracking Coxon lick and the chorus is brilliant. Perfect Blur! *DO* (YouTube)

It's a long time since I’ve heard the word 'bodacious', let alone used in a song. Grow your hair long to make head banging to this more fun. (YouTube)

Without a doubt my favourite band from Leeds. Their album is just so eccentric and timeless. No offence JoFo but this should definitely have won the Pluto Prize for my money. "With fists for spades we raid his grave" – chilling yet utterly beautiful. *RO* (YouTube)

My other favourite for the Pluto. This song has the much publicised line about Michael Barrymore but the delivery to me is so sincere. I find this song really comforting. I see them in a similar light to Wild Beasts, struck out on their own: you can see influences but really they are unprecedented if you listen closely. *RO*

I tried not to put Radiohead on this, but I did it anyway. I want to die listening to this song. Another outing for the 'chilling/beautiful'. *RO* (YouTube)

I had one. This song brought a bit of light relief. He makes it sound like something fun to do on a Saturday night. "I'm having a/Nervous breakdown/A mental shakedown". I thought a "mental shakedown" was a really charming expression you could only get in 50s songwriting. *RO* (YouTube)

Bach 'Aria from the Goldberg Variations' (played by Glenn Gould)**

This piece of music exemplifies that less is more. Once you start listening you can't stop. *EE* (YouTube)

Watching Regina sing and tap out the beat on a chair next to her showed me that sometimes great music can come out of just whatever is lying around. *EE* (YouTube)

Kate Bush 'Running Up That Hill'**

This classic track by Kate Bush has that quality of being able to be played anywhere at anytime and sound right. Even in Stockholm it works – a rare thing it must be said. *EE* (YouTube)

Björk is unique. Her compositions are incredibly rich and suggestive. In 'Jóga', the singularity of the strings intersecting with the vocal melodies blows apart the conventions of orchestral sound in pop. *EE*