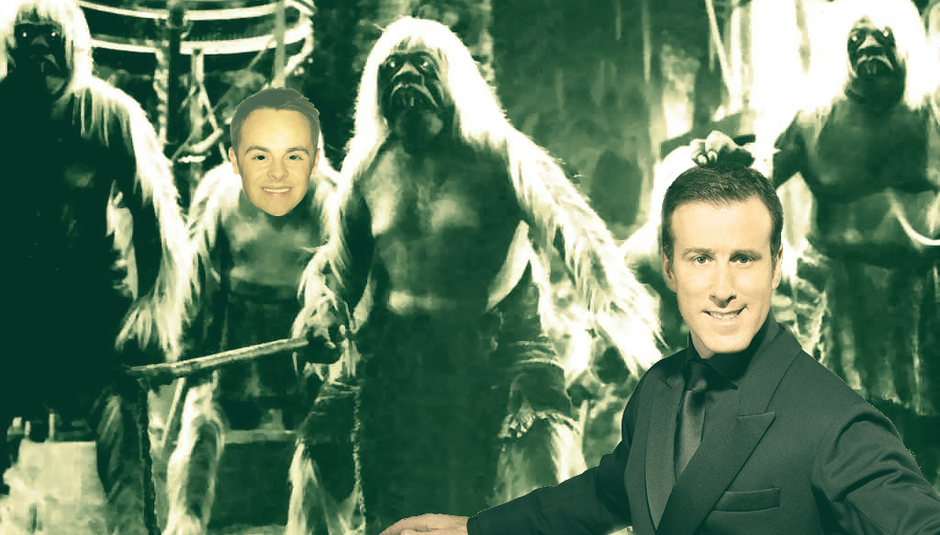 Live blogging the Brits 2015 is so 2008. Just look at every cultural media platform churning out the same predictable jokes about Sam Smith’s mopish demeanour and Ed Sheeran’s non-majority hair colour. Nobody laughs and we all get depressed. DiS, however, likes to be a little bit more cutting-edge than that, like the time it went gonzo Henry Hoover shopping with Nicky Wire or when it dared to fly in the face of the liberal-feminist media elite by asking Meredith Graves “what’s a pretty little thing like you doing in such a manly profession as this?” Hence, we placed JR Moores in our new Ryanair-sponsored time machine and sent him hurtling into the future to report on the Brit Awards in the year 2025 AD!!!... so he could make the same lame jokes about the gingerness of Sheeran. Here’s what impending horrors he witnessed:

I went to the year 2025. Not much has changed but Busted live under water and now trade under the name McBustedJLSandthreeofTakeThat. The supergroup open the ceremony with a disjointed medley of hit songs. Gary Barlow performs in a flat cap to hide the words ‘TAX DODGER’ that were carved permanently into his forehead by a gang of vigilantes inspired by the film Inglorious Basterds and the economist Aditya Chakrabortty. Tom Fletcher’s face has grown a little wrinklier yet no less punchable.

This year’s presenters are the much-loved light entertainment duo Ant and du Beke. The double-act was formed following the acrimonious split of the original Ant and Dec in circa 2019. Ant and du Beke’s act juxtaposes arthritic ballroom dancing with cheeky Geordie banter. (F.Y.I. Declan Donnelly went on to form his own rival double-act, Kant and Dec with the eighteenth-century German philosopher Immanuel Kant who was resurrected using pioneering hologram technology. Kant and Dec’s act juxtaposes deontological ethical theory with cheeky Geordie banter. They tend to get booked for higher-brow events such as Mensa’s Annual Gathering and The Wire office party. K: “Out of the crooked timber of humanity, no straight thing was ever made.” D: “Ooh, hello sailor.”)

Ant welcomes us to the 45th Brit Awards. He reads a few clichéd jokes from the autocue about Madonna’s age and the music industry’s continuing enthusiasm for cocaine while du Beke tap-dances beside him. The ceremony is running way over time already, so Ant gets the first few awards out of the way by hurling several gold statues into the open arms of the 11-year-old Eric Cowell, who inherited his father’s pop music empire after Simon drowned in mysterious circumstances. The only witness and survivor was the sturdily resolute Eric who certain commentators noted appeared strangely unmoved as he stepped off the speedboat in the aftermath of the tragic “accident”.

Then it’s on with the show and with his latest bid to rescue his ailing post-1D solo career, Harry Styles debuts his new Guy Garvey-penned single, ‘Transpennine Romance’. Styles is now terrifyingly bald and appears more frazzled than a very burnt packet of bacon Frazzles.

The ceremony is momentarily postponed when utilitarian punk band Flibbertigibbet cause a scene by burning a copy of the sacred text My Booky Wook. After being sentenced without trial by Prime Minister Brand’s reactionary government, Flibbertigibbet attempt to write their third album from a gulag on the outskirts of Nuneaton but soon drop dead from overwork.

Excitement mounts as FKA Twigs returns after a mysterious decade-long hiatus, speaking with an American accent and wearing a mask of human skin. Clasping the gold statue in one of her new bionic extra-arms, she passes an award to a half-bearded hipster DJ for ‘Best Use Of Irony In A One-Off Pay-What-You-Want Download’. Twigs sings a quick a cappella rendition of The Band’s ‘Caledonia Mission’, flicks a bionic finger at the TV cameras and disappears down a trap-door.

This is the first year without any ‘Best International’ categories following a successful campaign by the Daily Mail. This allows for additional categories to celebrate domestic achievements, such as ‘Best British Song In An Emotionally-Manipulative Christmas Advert’. For the time being, white, English-speaking foreigners are still permitted to present awards, such as Lorde, who since being crowned Queen of New Zealand doesn’t have much time for that ‘Royals’ song anymore.

Another new category following the earlier successes of Kate Tempest and George The Poet is ‘Best British Artist To Have Infected Popular Music With The Radio 4-Approved Disease Of Smug and Worthy Poetry’. Presented by a less-than-lucid septuagenarian John Cooper Clarke, the award is given to Britschool graduate Tristram St Bainbridgeton aka Da Killa Word Soulja for his single ‘Invisible Indivisible Mad-jority’. Da Soulja’s record sales go through the roof tomorrow morning when millions of parents buy his music for their children thinking he will be a “cool” positive influence on their kids. The poet-rapper’s shrinkwrap remains unwrapped as the kids continue to listen to proper music in all its rape- and violence-glamorising glory.

Triumphing over Brian and the Fünf Pugs, Right Shoddy Index, Karma Harridan and Duran Duran Duwalked, the ‘Best Newcomer’ award goes to Rorschach Shuttlebus. The ‘Shuttlebus are a goose-dub supergroup featuring members of other hypno-cemented quilt-flow bands including Insalata Chaperone, Chin Nope Plasma, The Balding Tick Vest and Crab Lanthorn. Released on a subsidiary of Gumshovel Records, their incendiary debut LP, Pass The Remedy Critch, is a groundbreaking fusion of lachrymal neo-gawk and modular post-Tony legwave. While tracks like ‘Intro (aka Pound-Shop Fuckover)’ and ‘Lower Bronze Inversion’ exhibit an underlying socio-politico hopelessness, the violent 27-minute comb-ballad ‘Roller Derby Dislocation’ hint at a subtle mastery of emotional itch. The video for second single ‘Fourteen Watchstraps, Still Same Watch’ did contain some pretty dodgy (and plausibly ironic) cultural appropriations of traditional Salvadoran tropes but nobody minded because the band are quite talented and also all-male.

Things take a more sorrowful turn with the moving 8-minute black-and-white tribute to Coldplay’s Chris Martin, who has died as a result of a 12-day Horlicks binge. Weirdly, Little Richard and Chuck Berry live on for another 600 years.

Dean Blunt should win ‘Best Live Act’ but his trophy is accidently given to Don Warrington from TV’s extraordinarily-long-running Death In Paradise because nobody can remember what Dean Blunt looks like despite the fact that he’s been the front cover of Mixmag for 58 consecutive issues.

Finally, the ‘Lifetime Achievement Award’ goes to Joy Division who recently reformed with Adam Lambert as their lead singer. If you close your eyes, it’s almost as if Ian Curtis is still alive. And if you open them, you get the bonus pleasure of seeing Lambert pouting, winking coquettishly and wiggling his slim bottom to the haunting guitar tones of ‘Dead Souls’.

Then the O2 is invaded by a ferocious army of Morlocks and everybody gets eaten alive. A tribe of grey-skinned subterranean troglodytes, Kasabian received no nominations.

From a Sleater-Kinney masterclass to ...