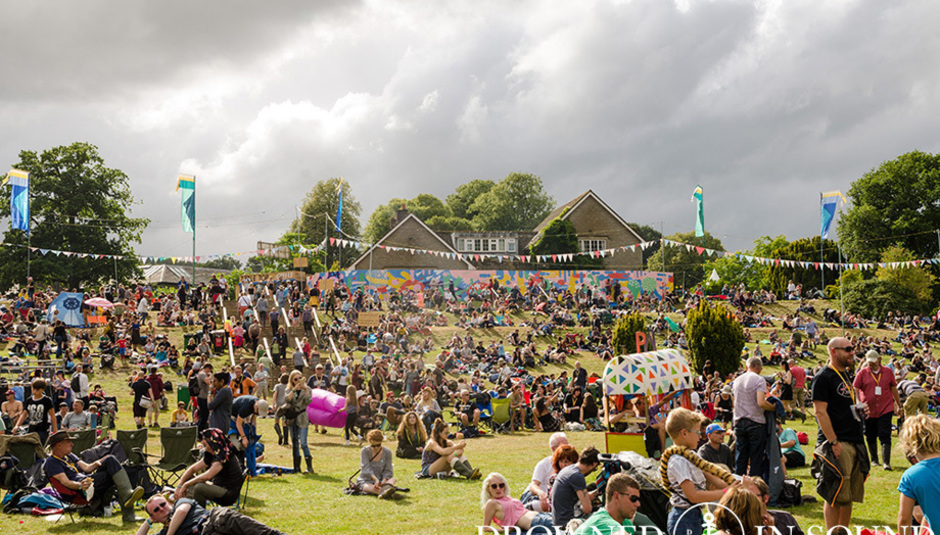 It’s a weird thing, getting excited at the smell of burning clutch, but as we dodge the sheep on the road descending from the Brecons it’s impossible not to start tensing up with anticipation, the views across the Welsh landscape - as spectacular as they are - becoming secondary to the hunt for primary-coloured canvas. 'That’s the mountain,' one of us says in a near-squeal, 'it’s under there..'_

Is there a UK festival with a more striking setting than Green Man? Festival No.6 has Portmeirion and Latitude has its lake and forests, but arriving via a national park to a site nestled at the base of a mist-shrouded peak wins it for me. Even through the relentless pissy rain that makes up most of the weekend the surroundings evoke a quiet awe, a calm at odds with the frenetic mania that typically characterises a weekend of music: from the field of night-lights swaying on their sticks to the tree boughs lying low enough to lie on this is simply a beautiful place to be.

Not that frenetic mania’s too hard to find. Getting anywhere near the tent for King Gizzard & The Lizard Wizard’s Thursday evening set requires moves like the guy from Assassin’s Creed, whilst the anticipation for a delayed Wild Beasts makes the opening address from festival director Fiona Stewart damn near inaudible. When they finally appear beneath the simmering red eyes of Boy King’s cover the screaming around me actually hurts, although at least some of that comes from people angry at the quartet’s new sound: ‘Is this the same band?’ asks someone nearby as ‘Tough Guy’ kicks in, the drums massive and the mood more horny Prince than delicate indie. For most though any confusion quickly turns to movement, ‘Get My Bang’ and ‘He the Colossus’ pushing the temperature up further whilst an icing of older tracks, ‘The Devil’s Crayon’ and a final chaotic ‘All The King’s Men’ foremost amongst them, placate the skeptics.

There were skeptics out for James Blake’s Friday headlining too, although far fewer of them after the event: whilst it’s a largely static performance there’s no denying the musicianship of Blake and his two bandmates, their songs a tightly-crafted mesh of rhythm and texture buoyed by his extraordinary voice. ‘Retrograde’ gets the biggest cheers but ‘Voyeur’ makes the crowd move, its mid-point breakdown genuinely thrilling, whilst 'The Wilhelm Scream’s furious build to a jet-engine swell is fantastically visceral - heck, it’s even enough to temporarily pause the flow of children incessantly rolling down the hills around the arena, which is perhaps Blake’s finest achievement so far.

As always though it’s away from the main stage that the best things lurk, and the best of those things was Kamasi Washington. Playing with a stage full of truly incredible musicians it’s a set that wins over even ardent jazz haters, with Miles Mosley’s upright bass on ‘Abraham’ amongst the most impressive musical performances that I’ve ever seen, whilst it would take a hard heart to remain unmoved by Washington’s tender words for his grandmother nor the tenor sax lines that follow them. Suuns’ set soon after is similarly staggering, although more because these are songs that feel like a violent assault: riffs bleed from the stacks between vocals that coil and hiss, the bass seismic and the atmosphere gloriously unrelenting in its menace.

Gloriously unrelenting would sum up Charlotte Church’s Late Night Pop Dungeon too, with the singer/News International nemesis turning in an hour of spectacularly jarring covers with the aid of her quite incredible band. We arrive too late for her take on Nine Inch Nails but the run of Bowie into Beyonce via The Cardigans and Gene Wilder’s ‘Pure Imagination’ is pretty much unmatched all weekend, the whole thing carried off with the mania of a Brighton hen party that belies the skill that sits behind it. But there’s no missing the skill that goes into Battles’ set: they have have only made it onsite from Poland 45 minutes before their stagetime but there’s no lapse in focus here, every riff and synth and brutal beat precision-primed for full effect. They take a while to bed in but by the close of ‘The Yabba’ there are few static bodies in the tent, and those that are are staring at the stage in disbelief.

Staring out from the stage in disbelief are Fews, incredulous that so many people would want to watch them: “This is ridiculous,” says frontman Frederick Rundqvist at the full tent before him, “why are you here?” And yeah - don’t tell them - the rain plays a part, but the Malmo-based foursome more than earn the attention, their sharp Interpol post-punk a gripping rush of melody and noise particularly welcome on a Saturday lineup that’s pretty low on the latter: by the time Jagwar Ma’s set comes around we’ve been near sedentary for so long it’s actually a shock to be compelled to movement.

That said Green Man is a festival that lends itself to folk, and the less abrasive fare that mainly fills the Mountain Stage is certainly pleasant enough: Meilyr Jones’ whimsical songs are good fun, whilst Gengahr and Slow Club supply an appropriately hazy Sunday wash. Belle and Sebastian are greeted like reborn deities, which leaves Amber Arcades' Walled Garden performance horribly under-attended - a real shame because it’s lovely - whilst Canada’s The Besnard Lakes conjure moments of beauty through the reverb. Warpaint’s Emily Kokal, meanwhile, manages to forget which country she’s in, affecting a horrific Scottish accent and being roundly booed as a result, although they make their amends with a stunning set that opens with ‘Elephants’ and somehow gets better. Six years on from Warpaint and ‘Undertow’ and ‘Bees’ still sound amazing, both utterly infectious and wonderfully brooding, whilst new song ‘New Song’ and upcoming album opener ‘Whiteout’ suggest it can’t be long until the LA band are headlining events like this one.

'Do they still burn the man here?' asks a guy camping near us on the Thursday, 'because it just seems really harsh.' And yeah, as the cries of burn him burn him are taken up whilst we’re awaiting the first flames it does seem a little grim, that the great closing ritual of the festival is to watch as the Green Man holding his drink aloft is turned to ash and cinders. But burn he does, the wind directing most of the embers right at my face as fireworks light up the sky and the hills and the people below, sodden but smiling in the final hours before the real world snares us back, and suddenly it occurs that maybe he has it easier - that he at least doesn’t have to leave.

"After Brexit I've been so politicall...

DiS Does V Festival (and has an exist...