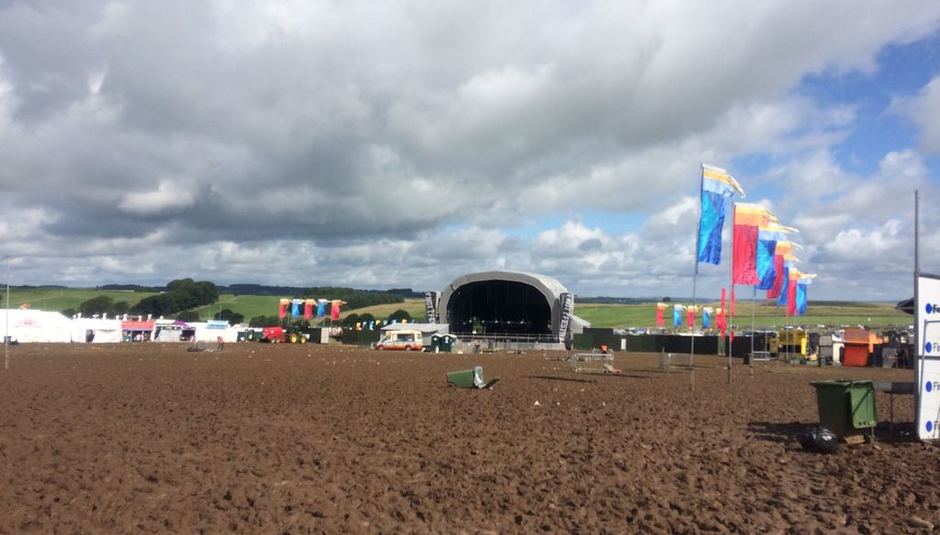 Note: this review is not in fact by me but a contributor who would prefer to remain anonymous – AL

When I was 17 I finally made it to my first music festival. It was T in The Park 2008, and the likes of REM, Amy Winehouse and the Chemical Brothers, as well as glorious sunshine for the duration, made it a fantastic introduction to a hedonistic world I’d heard so much about. Travelling to and from Scotland that week, I poured over a copy of One Day in the Life of Ivan Denisovich, Aleksandr Solzhenitsyn’s 1962 novella about the trials and tribulations of life inside a Russian gulag. Then, never would I have linked the epicurean excess of a festival with the exhausting oppression of that novel. Not until Y-Not 2017, at any rate.

Okay, so I'm being somewhat hyperbolic. And the truth is that Y-Not 2017 wasn’t similar to life inside a Russian gulag. For a start, it was far too disorganised.

Arriving on site on Thursday evening, the sun was shining and it was straightforward enough to pick up wristbands and get ourselves set up before heading over to the arena to catch the suitably summery sounds of The Skints.

Knowing the festival site quite well, despite the major shifting of the camping areas and indeed the stages themselves, it was easy enough to find our way towards the Main Stage where we opened the first (alright…third) beer of evening and proceeded to get in to full festival mode. Anyone familiar with The Skints will know they’re a solid live band and they took the size of the stage in their stride. Feeder, likewise, were a worthy close to Thursday night’s entertainment, leaving everyone hopeful for the rest of the weekend.

Friday started promisingly enough. Sets from Sugarthief and One Giant Causeway eased us in well; the latter we stumbled upon after taking shelter from the rain which started innocently enough and went on to be synonymous with the festival. Thankfully the band reminded us who they were before closing their set, as due to the complete lack of signs outside, only the tripled size of the tent let us hazard a guess to it being The Quarry Stage – now on a par with Leeds’ NME stage, making last year’s tent look like more of a gazebo than anything else.

That should have been the first give away as to the organisational issues that quickly became more synonymous than the lack of sun, but as it was, the lack of sun was the more pressing issue, and we took shelter in our tent and waited for the shower to pass.

Seven hours later, at 11pm, we emerged in to a completely different festival, where The Vaccines' cancellation was only the tip of a very muddy iceberg.

Reminding us of something out of a photograph of the Somme, the campsites were awash in churned up mud, and there appeared to be nothing in the way of straw or woodchip to soak it up. As is often the case at festivals, the music arenas were a quagmire, but there seemed to be nothing in place to help alleviate matters, and the two narrow entrances in to (and indeed out of) the arena appeared to be nothing more than bottlenecks staffed by overwhelmed volunteers, making a hasty retreat to the tent the obvious course of action.

Waking up on Saturday to a warm sun, it was obvious that despite bringing a certain degree of optimism to the revellers, it also shone light on the shit show things were rapidly descending into. In a bid to avoid a repeat of Friday’s cut-offs and cancellations, stage times were brought forward with the plan being to avoid the ever-threatening promise of more rain. In defence of the organisers, it was a move which worked. That is, if you were already in the arena and able to see the amendments on the side-screens of the Main Stage. For anyone without battery, phone signal, or even just back at their tents, these amendments weren’t particularly accessible and given many of the stewards' apparent propensity towards not giving a shit, weren’t common knowledge either.

It’s a shame, given that the bands we actually did get to see were some of the best in years. Y-Not staples DECO kicked off the Main Stage in front of an impressive early crowd; singer Max Kendall celebrating his birthday in fine style, belting out the likes of fan-favourites ‘Turn Around’ and ‘ITIWY’ as well as most recent single ‘Chances’. Elsewhere Cassia’s sun-soaked calypso pop filled The Allotment Stage, with more people outside unable to get in. In a testament to the band’s rapid rise, the Macclesfield three-piece had an army of fans singing back every word; a harem of teenage girls swooning at their every word. Though the band might only be in their infancy in comparison to others we saw, their chemistry and, dare we say it, commercial appeal speaks volumes. Expect to see a lot more from them very soon.

With the sun sticking around, those of us not having to endure the main campsites could pretty much forget about Friday’s washout and concentrate on the music. Aiming to catch The DMAs on the Main Stage, due to the amendments, we ended up watching Slaves instead.

If there was ever a band to make you feel old it’s Slaves. Like Sleaford Mods’ try-hard younger brothers, the duo aggressively gurn and shout on stage, and though the perfect soundtrack to the MDMA casualties that formed massive mosh-pits at the front, they genuinely left me questioning myself as a critic. How are they popular? And while sound issues plagued the Main Stage regularly through the weekend, here they were a blessing in disguise.

A quick squelch around the arena proved that despite the weather and the generally good vibes, conditions around the site were rapidly deteriorating, with more rain forecast. Paths had become genuinely dangerous and there seemed fewer stewards around than on Friday, in fact, despite the extra few thousand tickets sold, there generally seemed to be less staff on site than in previous years, and those that were present seemed just as clueless as the punters asking them questions.

Taking to the Main Stage at around 8:30, Stereophonics turned out to be the only headliner to actually play over the weekend, and prove a welcome distraction from the bog underfoot. While some people we spoke to claimed that the sound wasn’t great over the course of their set, we found little to complain about, and though it was unsurprisingly the more well-known material that provokes the biggest reaction from the crowd, it’s easy to see why Stereophonics are still going strong a quarter of a century in to their career, and though the crowd might not have known it at the time, as the closing notes of ‘Dakota’ ring out, and fireworks light the sky above the stage, that’s the last headliner they’ll see this weekend.

Like a game of Chinese Whispers, rumours were circulating early in the morning that the plug had been pulled on the final day due to the 'adverse weather conditions'. An update on the festival’s social media pages did in fact confirm this but it was far from common knowledge at first. Finally, as people began to cotton on, a mass exodus prompted ridiculous waiting times to leave the festival site, with many cars getting stuck in the mud on their way out. In what proved to the final nail in the coffin, by this point no stewards seemed interested in helping, and increasingly irate punters were relying on local farmers and strangers to tow/push their cars out and on to firmer ground.

Fortunately, having camped in the production camp site, we didn't have to deal with many of the complaints voiced by the general public. But that doesn’t mean they shouldn’t be addressed by the organisers. There was, seemingly, a complete disregard for health and safety in an effort to make the event more lucrative. What was a brilliant, boutique family-friendly festival, seems one step closer to becoming just another faceless money-making enterprise.

The Fangasm: Troublegum by Therapy?