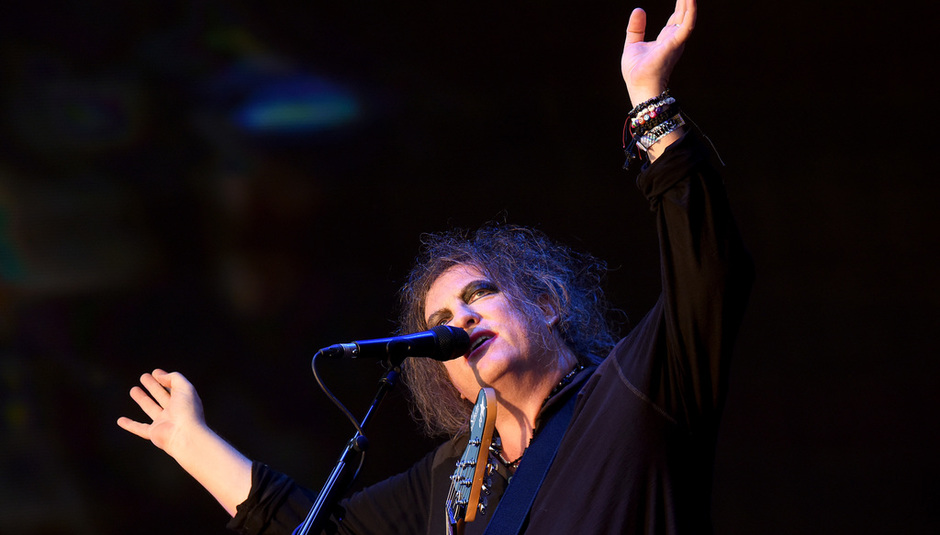 Some days I wonder what the exact continued point of this country is, and then other days we win a World Cup quarter final and The Cure play a massive, joyous gig in Hyde Park.

Despite the grandeur of their most popular phase, and despite the fact they’ve been a festival headline size act for the bulk of their career now, there is still something a bit disconcerting about a band as unreconstructedly themselves as The Cure playing to a sold out audience of 65,000 on a glorious summer’s evening. (It has been endlessly noted that he said this but it is amusing when a charming Robert Smith apologies for his general lack of chat by noting that 'I can't really talk until the sun goes down, it's taking all my energy not to dissolve').

There is of course nominally a festival around them, BST Hyde Park, which I’m sorry to say I completely miss beyond the distant, pleasant sounds of Interpol wrapping up with ‘Evil’ and ‘Slow Hands’ as we arrive. (It's a terribly myopic thing to say, but I’m not entirely sure I get the point of BST having all the bells and whistles of being an all-day, multistage music festival when it could probably kick off at 5pm with a couple of choice support acts on a solitary stage and everyone would probably be just as happy for much less faff.)

The success of Disintegration plus the enduringly iconic high goth trilogy of Seventeen Seconds, Faith and Pornography has given The Cure a rather serious rep, but Hyde Park is largely a reminder of what a dazzling back catalogue of pop singles they have.

There’s no ‘Love Cats’, but it’s pretty much a non-stop cavalcade of the rest of their hits, from the batty electro-pop of ‘The Walk’, right up to 2004’s underrated ‘The End of the World. That any band can brazenly drop a pair of songs as wonderful as ‘Inbetween Days’ and ‘Just Like Heaven’ next to each other like it was no big thang is just overwhelmingly glorious. It’s also funny to think how music becomes popular - these swooningly romantic and often screamingly eccentric songs probably charted lower than almost any other hit aired by any other BST headliner this fortnight, and yet here they are, perfectly preserved and untouched by the years, bawled back by a stadium's worth of people.

The enduring strength of Smith’s songcraft has a lot to do with it - no wonder he’s felt a touch of writers’s blocked of late when he has such a legacy - but it’s also about how the man himself sells ‘em. His voice is remarkable - a wonkily expressive adolescent yowl that should in no way becoming out of a 59-year-old man. These songs just wouldn’t have the same fizz or heart if they sounded like the singer was jaded by the years. But he remains the eternal mopey schoolboy, and that is emphatically a good thing. It would be a betrayal of us, as much as anything, if he stopped for one moment looking, sounding or being – just really, intensely being – Robert Smith.

The narrative of a pop-tastic evening is complicated a little by a couple of lengthy album tracks that slightly loose portions of the crowd. A clutch of Head on the Door and Kiss Me, Kiss Me, Kiss Me deep cuts absolutely hit the spot, but the ponderous end to the main set of ‘From the Edge of the Deep Green Sea’ and ‘Disintegration’ is a splash indulgent. It’s completely earned, of course, and the songs are taken from the band's two biggest albums. But if I'm going to grumble about one thing – and that's why they pay me the big bucks – it's that a show notionally celebration the band's fortieth anniversary found 20 minutes for those songs but no space for anything off Pornography or Faith (Seventeen Seconds is represented by a ferocious one-two of ‘Play for Today’ and ‘A Forest’).

Everything snaps back into focus as the encore begins with a gargantuan ‘Lullaby’, still both magisterial and almost musically unclassifiable after almost 30 years. After cheerily tossing in ‘Close to Me’, ‘The Caterpillar’ ‘Why Can't I Be You’ and ‘Friday I’m In Love’, the band mark the fortieth anniversary of that first gig with a frantic slew of their very earliest work. That’s not uncommon at their recent gigs, but again, there’s something remarkable about 65,000 people singing along to a group of songs that weren’t – ‘Boys Don’t Cry’ excepted – even close to being hits.

The Cure are undoubtedly now national treasures. But a band who sound so vital should surely be making actual music. The fact they can play enormous, generous gigs like this is wonderful. But I hope it doesn’t leave them completely insulated from the imperative to create something new. The fire can't be out just yet.