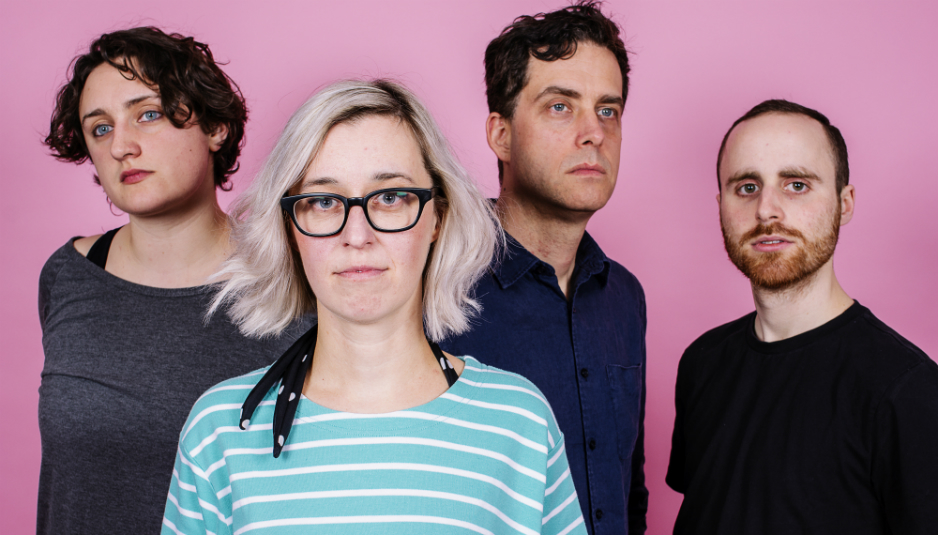 One of my biggest mistakes in this adult life was selling Susan Cain’s Quiet: The Power Of Introverts. I can’t tell you how many times in the past three years that I’ve wanted to pull that tome off the shelf and quote some incredible factoid, or at least seek comfort in all the ways that introversion can empower us and benefit humanity. Instead, I just clench to the fact that we’re not defective, that my wariness merely filters out the people I can’t connect to. We make fewer friends, but we tie tighter bonds.

Of course, no one knows that when they’re stuck in their hometown, dreaming of a way out. In the rippling mirror pool that Silvi Wersing and company create with Chorusgirl, shades of that brooding subconscious skim over the crystalline surface. Before the band had even coalesced, our lone protagonist penned a perfectly quirky single about resigning to your lot in life as a small town weirdo; this was three years ago, when she was tending to her mum back home in Germany and not connected to any in-crowd in London. Today, Chorusgirl are a solid touring unit with one album under their belt and another about to launch this Friday, and yet that old isolation still beckons under the waves. Wersing didn’t even realize her subconscious was still quarantined until the label asked her for some pull quotes about the massive opener ‘In Dreams’. “All of a sudden I realized, oh my god, yes, I’m still working through this whole topic of my upbringing, and being just a passive dreamer type of person,” she told me over Skype. “I still spend a lot of time in my hometown, because I spend a lot of time taking care of my dad, so it just feels like I just never left!”

Granted, Wersing had more than the ailing health of her father to worry about after the debut. At that time, Chorusgirl felt stronger and more confident as a unit than ever. When their former guitarist could no longer commit to the band, Faith Taylor of Suggested Friends volunteered her tremendous talents. As Wersing told me, the personnel shift felt invigorating: “With Faith now, we’re going to zoom [through] the second album!” she thought at the time. Their tour route flung them across several festivals, even as far as the New York Popfest. And the record would come out on one of the nation’s most beloved indie labels, Fortuna Pop.

Alas, as regular readers already know, that beloved label folded at the tail end of 2015. Chorusgirl were in Germany when Wersing’s dad was admitted to the hospital; that tour screeched to a halt as she flew to see him. And then 2016 (as regular readers also know, with dreaded familiarity) brought on the slow storm clouds of Brexit, which threatened to cut Wersing off from her homeland. Between two evictions, a crashed van, and already high levels of self-doubt, Wersing found herself sinking deep into stress. “It was like when you spin around a carousel,” she said. “I was just barely hanging in there.”

Still, Wersing kept on writing. Creation was how Wersing related to the world, and escaped the lonely disposition of her childhood; ever since her days at uni in Cologne, the introverted artist formed her strongest bonds with like-minded musicians rather than her colleagues in biology. “It’s kind of a cliché to say that it was really important to me when I made it,” she admitted, “But [I felt like] if I just disappear into my work, I’ll just hang on to this work here, and I’m just going to sit at my computer and edit these songs. I didn’t want to make the ‘really difficult second album’, but I just really wanted it to be out there.”

With Shimmer And Spin, Wersing could finally see the light at the end of the two-year-long tunnel. Where our self-sufficient protagonist wrote and recorded about two-thirds of the self-titled debut, this one features the whole band on every song; Taylor even wrote two songs herself, and sings on the gorgeous fever dream ‘Demon Baby’. ‘Love Is Like’, Taylor’s other composition, draws from her PhD thesis that correlates relationships with political and economic hurdles (like, for instance, coping with substandard housing). “She’s very good at whatever she’s doing,” Wersing said. “She has a very beautiful, high-ranging voice, and she’s a brilliant guitarist, and she’s an excellent songwriter. We’re very lucky to have her.”

Mind, Wersing is thankful for all her bandmates, not just Taylor. Despite her surreal writing and production skills, she wouldn’t call herself a musician; everything that she knows on guitar was the result of her own private study. “I can’t often name the chords on the songs,” she admitted. As any amateur musician can attest, that inability can make collaboration intimidating; indeed, that was one reason that Wersing turned down the chance to hand over Shimmer And Spin to an outside producer, as bands often do to raise their profile. “Udo [Westhoff, bassist], Mike [Boyle, drummer] and Faith in the band, I would definitely say without any hesitation that they’re better musicians than I am,” she said. “And I’m not trying to be cute or anything. I’m very lucky that they can speak that language.”

Even though Wersing can’t always speak the common language of music, she still knows exactly what she’s going for. “If you listen to Songs From The Big Chair by Tears for Fears, that massively influenced how I think about drums,” she told me. Shadowy and complex pieces of the 80s inspired the songwriter most, from the fey worlds of Cocteau Twins and The Cure, to the grounded, mature work of The The, to even more whimsical artists like Sparks and XTC. But more than anything, those classic works gave Wersing a tangible reference point for the washed-out, spaced-out drums that underpin the Chorusgirl sound. “[With] other indie bands,” she said, “I can tell if they’re influenced by nineties music, or naughties music, by how dry the drums are, what have they done with the toms, is the snare really dry or really low in the mix.”

While Wersing can describe exactly how she wants the percussion, she can’t always explain her own writing. Granted, anyone who tends toward introversion can likely relate; when prompted on the spot to elucidate on their deepest thoughts, neurons hesitate to connect, and the introvert falters. One of Wersing’s personal favourites from Shimmer And Spin, ‘Not Yours’, both illustrates and pokes fun at this, as she paints a picture of herself tucked in her room, passing judgment from afar. “I know the downsides of being on the fence, and not being so outspoken,” she says about the lyrics. “But I also know the clichés that surround introverts, that they’re very ‘deep’, they have meaningful answers and insights and analysis.”

That’s why, unlike many artists, Wersing looks forward to what other writers have to say about the upcoming album. “I may not always have the words to say succinctly what I wrote about,” she said. “[Reviews] really inform how you go into the project, and how you talk about it. That was the case before - some reviewer wrote something about the debut album, that what we were trying to do was ‘like watching the sun through storm clouds’. I thought it was a good summary, and also a good summary of who I am as well. But that’s a dangerous territory to go into.” Here she laughs. “You don’t want people reviewing you!”

While Wersing doesn’t want critics to evaluate her instead of her music, she nevertheless has a theory that her disposition and her career arc are related. Authentic artists, she theorizes, will see their personality reflected in both their fans and their project’s trajectory. So an extroverted singer might bang out summer anthems and peak early on the charts, but an introvert will find that their smaller audience will stick around longer. “A lot of the time, in my studies or at work, I’ve been very quiet, and never made any scratch at the start,” she explained. “But [I’ve] persistently beavered away. I think that’s the trajectory of the band, we’re going to be persistently beavering away.” And that’s true – when Wersing tells me that she writes music to heal her 16-year-old loner self, I think about the 16-year-old hermit in me, who still can’t believe that I’ve finally cracked my shell.

Shimmer And Spin is out on 16 November via Reckless Yes. For more information about Chorusgirl, including forthcoming tour dates, please visit their official website.