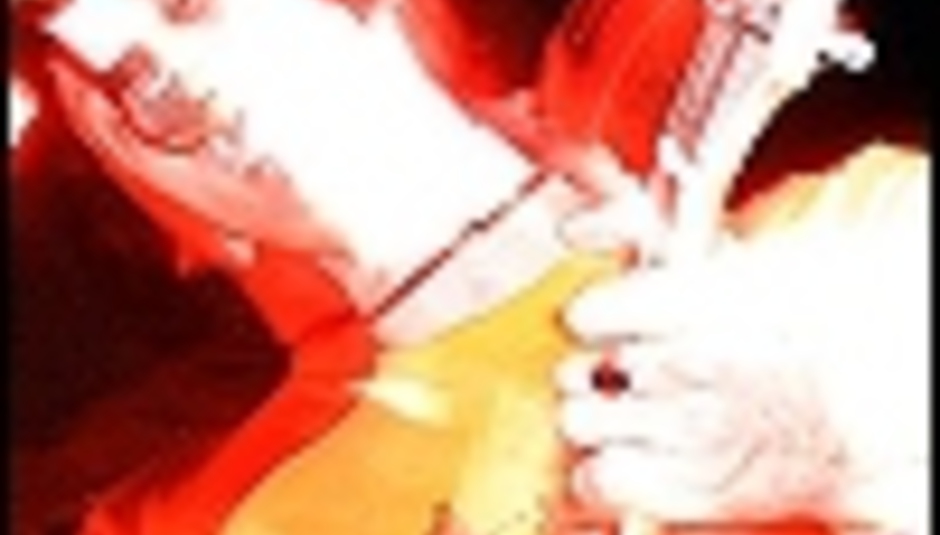 by Kate Price September 7th, 2003
It’s the second day of Leeds festival. The sun is shining, cups of Carling are being glugged with a wince to the aftertaste and Less Than Jake have just taken to the Main Stage behind us. Sitting on the grass in the festival’s seemingly admission via haircut guest area, I’m joined by drummer, Matt Lunn, bassist Thom Craigen, guitar/vocalist Stuart Jones and a few minutes later, returning from the medical tent having just split his head open on the door of their tour bus, Colour Of Fire’s skinny cartoon character second guitar/vocalist Owen Richards walks up beaming widely and joins the circle to show off the brand new hole in his skull.

Despite having just played a set riddled with technical hitches and vitriolic outbursts as to the evils of Marshall amps, Riverman’s new brood, Colour Of (Mother Fuckin’!!) Fire managed to leave the Carling stage to a hum of appreciation and more than a handful of new fans. It’s a scenario they must be getting used to by now; having recently acquired a percentage of both Placebo and InMe’s following when supporting them on tour as a completely unsigned band. Surely this isn’t normal for a band who’ve barely been together a year and a half? “It’s all down to great management and agents really” Owen gushes excitedly, “At one point it seemed ridiculous, we were playing gigs SO big and we’d only been together 6 or 7 months!” he pauses momentarily with an afterthought of wide-eyed disbelief then continues, “We had equipment that was worse than your average band playing a Barfly or something and we were playing these huge gigs with crap stuff that would break all the time… But we really had an amazing time!”

Since those gigs, the growing league of [mostly female] fans backing up the band and supporting their every move is something they still seem somewhat taken aback by. Matt explains affectionately, “We’ve got a little hardcore group of fans who really work for us so hard – they’re brilliant!”. As a group they tell tales of fans so caught up in Colour Of Fire, they follow them quite literally wherever they go, be it Edinburgh, London, Scarborough, York or anywhere in-between. They speak affectionately and gratefully, but at the same time an element of bafflement undercurrents their voices. “Y’know, we’ve never even done a proper tour - we’ve never done a string of more than 5 dates in a row. It’s insane!”

With fans so obsessed, critics and industry types singing their praises alike and a buzz of hype surrounding them like an aura already, the question on many a mind begs, ‘Will they stay grounded?’ Owen chirrups “I think we’ll always see ourselves as the underdog really”.

“If there’re people wiping your arse for you it’d be easy to get too complacent and think you’re bigger than you are, but we know we’re not. We still drive ourselves and set up all our equipment. Our crew is basically 2 people.” Stuart, or as he is more familiarly known online, S2 carefully defends the band and mulls over the idea, “I don’t think a band should go from nowhere to having everything done for them. You need to do it yourself. It gives you the balls to move forward and you learn respect for everyone else around you… So if you do eventually get to that point then you’ll appreciate it a lot more!”

So they’re playing huge gigs, they’ve got obsessive fans and they’re still completely grounded. But one aspect of the industry Colour Of Fire seem to be suffering from at the moment is labels, name tags and the general desire to categorise every new band and stick them in a compartment with a bunch of irrelevant acts just because it’ll register with the general public. Unfortunately for these four, their name is constantly being tarred with the ‘haircut band’, ‘glam’ and/or ‘Manics wannabe’ brush… I mention the phrase ‘image over content’ and it’s time to see some of that fire they sing about so much. Stuart spits, “That’s BULLSHIT. People can accuse all they want, I don’t give a fuck!” It’s obvious I’ve hit a nerve. With numerous critics comparing them to bands they don’t even like, let alone take inspiration from, it’s easy to see why they get so irritated. “We’re not a haircut band, it’s just the way we are. I’ve had this outfit for 3 years - we all looked like this before we were in the band”.

Still, trying to revert to order and keep an open mind, he reluctantly admits, “I suppose it’s like if you worked in an office, you’d wear a suit and I suppose if you’re in a band it might be something that subconsciously happens. We don’t sit there discussing it, trying to create a style for ourselves, but I suppose you might end up buying certain types of things. It’s certainly not something we spend time over though”. Owen’s more simplistic answer? “Give us a year and a 60 day tour and we’ll come back and kick all your arses!”

Despite comparisons to the likes of The Manics and King Adora, if on any fucked up level they look like them, the new album certainly isn’t gonna sound like them! “It’s going marvellous! We’ve got a guy called Steve Osbourne (Happy Mondays, New Order, Placebo) at the helm and he’s making it sound phat as fuck!”

S2 explains the slightly edgier, less poppy angle taken for some of the newer songs, compared to their recent upbeat, bubble-gum single, ‘Decision, Decisions’. “We’ve only been together about 1½ years and we’re still growing as a band. The earlier songs were quite simplistic but they’re getting better.” He promises, “They’re maybe not as catchy but they keep your interest for longer and they’re becoming quirkier – more of an introverted dark pop really.”

But regardless of their experimentation, personal growth and discovery of new music, Owen happily admits the new album isn’t exactly gonna be a lesson in the art of prog-rock, “We’re always gonna have our sound, we can sit there all day listening to Fugazi and try and write a song like them and it just won’t fucking happen, it comes out all wrong. There’s definitely a style to the way we write together, even if other parts of the music changes.”

At the moment, everything’s looking flamingly bright for Colour Of Fire. And maybe I’m guilty of looking through rose tinted glasses as a big believer in them, but these guys have certainly got the right attitude for the time being at least. With two front men; one like an excitable little boy, seemingly amazed and intrigued by everything and the other perhaps slightly more reserved and judgemental but still ultimately fun and easy going, plus possibly the only drummer I’ve met who doesn’t constantly seem utterly wired and a bassist who smiles more than he pouts, Colour of Fire aren’t exactly your generic Manics cover band. More evidently, they’re one of the most fresh, fun and deserving new bands around and, providing they don’t fall victim to the hype machine, this time next year they could well be playing somewhere infinitely higher on the Carling Weekender bill. Remember where you heard it first!

Colour of Fire's second single, 'Cut It' will be released this Monday, September 15th. For more information visit ColourOfFire.co.uk.