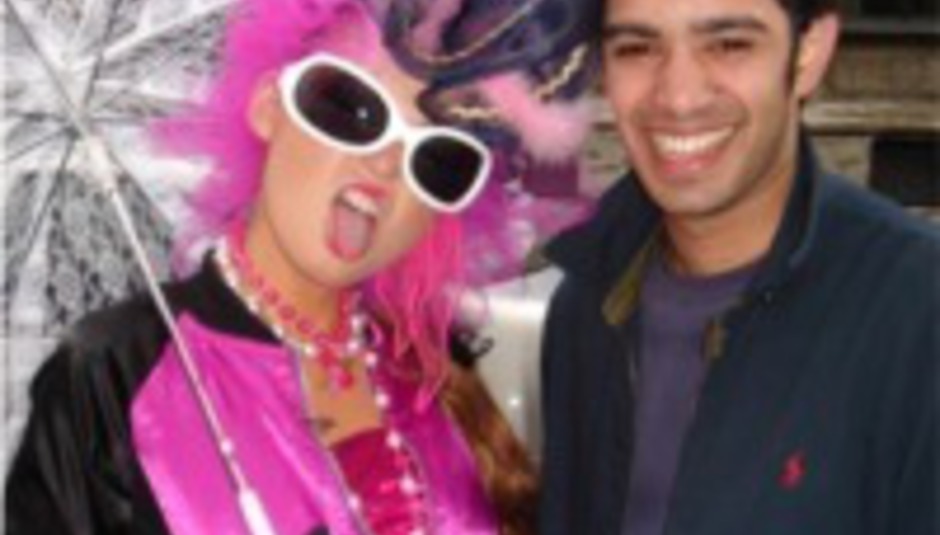 Raz on The Raz in... Iceland

Raz on The Raz in... Iceland

I’m in Iceland, in the farther reaches of the North Atlantic Ocean, just 30 miles or so from the Arctic Circle. What is there to say about this fair land that hasn’t been said before? Nothing. Not a single thing.

You know that the country has a population of fewer than 300,000, of which over half live in the capital, Reykjavik. You know that 90 per cent of the land is a barren, desolate wasteland which “looks like the moon”. You know that Iceland has a higher number of artists and musicians per capita than any other country in the world.

That’s why it’s my turn. I’m dredging the bottom of this glorious hellhole of a barrel for all it's worth. They say that everyone who comes here becomes an absentee citizen; they fall in love with the place and vow to return over and over again, usually following through on their wild-eyed claims. Never one to rely on the opinions of others, I am determined to make my own mind up about this place.

Handily, Reykjavik is hosting the inaugural Rite Of Spring festival this weekend. This four-day jazz and folk event has a fine blend, comprising some of Iceland’s finest indigenous talent as well as importing some premium foreign pedigree. Aiming at acting as a counterfoil to the globally renowned Airwaves festival, it falls on the weekend where Iceland officially kicks off with six months of summer. That’s entertainment.

Cut to the heart of capital, where I am walking, early in the day. I chance upon a small patch of urban greenery which is resplendent in the unexpected warm sunshine – it so happens that this is the best weather they’ve experienced here for some months. There are young girls on a trailer singing karaoke. Singing badly. There are more youths casually strewn across the grass swigging from ‘cheap’ bottles of Asti and whatever else they can get their hands on. It is also the weekend that the high school kids break from school. A brief chat with one rather vigorous young lady reveals:

“This is the time when school kids get drunk and act like arseholes. Enjoy Iceland.”

Nothing too strange, you might think; nothing that a quick ASBO can’t fix, surely. It takes a second look to fully appreciate that the city centre is awash with rampaging kids in fancy dress outfits ranging from Cowboys & Indians to The Cat In The Hat. Early indicators suggest that the coming of spring may signal the natives’ first chance at going mental.

Driving past the American airbase with an F-15 Eagle swooping overhead did little to calm my nerves after being confronted by the most stark wilderness I had ever experienced. Solace was soon found in a central watering hole, Kaffi Brennslan, which served as a home from home. Sited opposite my own base for the weekend – Reykjavik’s biggest nightclub, Nasa – its reasonably priced pints and warm atmosphere were enjoyed at least seven times during my short stay. All herald my new local.

It was in Nasa that the Rite Of Spring festival was taking place. The opening night saw the diminutive Brazilian maestro, Ife Tolentino take the stage first with his band, which included one of the most ridiculously annoying saxophonists ever. The very nature of this band, with their technical prowess and proficiency, lent to the copious amounts of lengthy solo breakdowns. So frequent were they that even a flippant prophecy of a tambourine solo was realised, prompting reactions of disbelief and horror in equal measure.

Once I realised that old-timer, mainstream specialists Mezzoforte included that saxophonist among their ranks I knew it was definitely time for another pint at Brennslan. Not even a lengthy and consistently outstanding drum solo could sway me. Raz: “This beer is ridiculous. First off it’s called ‘Viking’ and secondly it tastes of arse.”

Icelandic Man: “You know that the Wikings (sic!) were actually very sensible people, though.”

Raz: “What… like when they stole all the Scottish women and then just generally burnt our prehistoric council estates?”

Icelandic Man: “Yes. This beer is not so good. I am going hiking tomorrow.”

As another memorable conversation drew to a close and the walk up to the top of the slight incline brought a certain mysterious magic to my life. Tonight the Northern Lights were but a greenish smudge in the sky but as I walked up towards the gently lit, giant concrete church, even the most vague distortions in the firmament makes one wonder what else lies overhead. With this inescapable magic a nightly ritual for the people of Reykjavik, it really is no wonder they live their lives the way they do.

Still reeling from the marvels of the night, it was time to explore the city in more depth. I had already encountered the unexpected sight of hundreds of costumed teens roaming the streets but it was when I travelled a bit further, say a whole half kilometre, that I was confronted by the harbour. Again, nothing special until you spot that there is a mountain range on the other side of the harbour. You just don’t get mountains in capital cities. Right? The day just wasn’t going to get any more ‘normal’.

Once I realised that everyone I spoke to had just arrived from the UK for the weekend I decided to embark on some cultural activities. I travelled to the top of a 75m-high church steeple that overlooked the whole city. The view was great. I find out later in the day that the bars over the windows at the top were only put in place after some lonely chap decided it was the best place to jump out of. So it goes. I then went to view the country’s oldest manuscripts – The Sagas. It was there that I encountered a room containing nothing but a 12ft Jesus, bathed in a blue light. It appears that putting one of those at the top of a flight of stairs is a guaranteed way of making me shit myself. Funny that.

A brief sit-down in the Kaffibarrinn – a bar that is co-owned by Britpop leg end Damon Albarn – provided a leisurely atmosphere in which to forget the fear of almost seeing God. The wickedly expensive pint that they serve there proved to only make me appreciate ‘London Prices’. The two young chaps happily humping against the bar only made me appreciate the subtleties of our no-eye-contact capital.

Later, the one British act on the bill, 100% Dynamite, fell totally flat on their faces at Nasa. They hardly managed to rouse the crowd into dancing at the “party” that the square peg of an emcee threatened. The poor DJing hardly helped matters, as they played an unfamiliar and self-indulgent set that never had a chance in hell of sparking the attentions of the locals. You’d be better off taking notes on how to empty a lively room in record time.

The ominously cloudy sky that evening not only lent to a lack of Aurora Borealis tomfoolery that evening but also to a decidedly moist morning the following day. This is more like it. The blazing sunshine and slight winds had baffled and disoriented me up until now but this constant and torrential rain is exactly what I had been expecting. Perfect.

What to do in such weather but stroll around this bounteous city? So off I trotted. Upon exiting one shop deep in the centre I was faced with a vision of ultra-pink. In the middle of the pavement was a young lady in a shocking pink bomber jacket and an even more shockingly short skirt that garnished some shoes in a more garish shade of ankle breaking. Wearing sunglasses that failed to dwarf her personality, she stood clutching a white lace parasol in one pink satin-gloved hand and a cigarette in the other. Obviously, inquiries were duly made.

Raz: “Excuse me… what are you doing?”

Pink Girl: “I am the Icelandic Eurovision Song Contest entry”

Raz: “In which year exactly?”

She handed me the ticket. It read: “Silvia Night – International Superstar”. If there was ever an invite that warranted further investigation, it was most certainly this one. Upon arrival, suited and booted, it was pleasing to see that the beer was handily labelled ‘lager’ and so I handily labelled the mojitos ‘death’. It was always going to be one of those evenings.

After waiting in a cramped upstairs balcony bar with – I was reliably informed – every last one of Iceland’s broadcasting luminaries for almost three hours, Silvia Night turned up more than just fashionably late. Carried in on a throne by men wider than they were tall, Miss Night was resplendent in a gold and black ensemble. Almost unrecognisable from earlier in the day, she stayed seated while celebrities such as the Sugarcubes’ Einar Orn recited her poetry. Oh, how she laughed.

“Wham! Bam! Lick my ham!
Whoom! Boom! Shake my cahoon!
Shimmer! Glimmer! I am the winner!
Hoosie! Smoosie! And this is my bootie!”

After just a matter of minutes she was up and making her away round the room, a parody of herself, everyone and everything that went before her. Why the hell didn’t the UK think of putting Ali G into Eurovision? This is surely genius. After she kissed the air surrounding each of my chops, she looked me straight in the eye, stroking my jaw with her golden talons.

Silvia Night: “Do you know what Madonna wrote as the foreword for my book?”

Silvia Night: “My boyfriend is just over there. Look.”

Shot down, aeons before I could even get into a blaze for some glory, I trundled back down the hill vowing to make sure that, somehow, she must win Eurovision. It is the only way. I stopped off at Kaffi Brennslan for another pint of “Wiking” before going back to see some more bands.

Little did I know that Stórsveit Nix Noltes were going to blow my socks right off with their stunningly complex Balkan folk-influenced rhythms and harmonies. The Icelanders got the locals off their feet and dancing in front of the stage in a way that 100% Dynamite failed in dismally the previous night. Despite some core members being absent tonight, SNN proved to be the highlight of the Rite Of Spring festival.

The last night saw a blues band rattle along within their own means and a meandering Scottish-South American hybrid in Salsa Celtica. The latter served to only remind me that Brazil would win the World Cup this summer after Wayne Rooney’s gammy foot scuppered any little chance we ever had of winning the blasted thing.

On a brighter note, my last night was spent in the company of a Miss Reykjavik finalist and Miss Iceland hopeful who explained, with various pointed fingers and shaken behinds, that ‘Raz’ means ‘arse’ in Icelandic. Who would’ve thought it?

Scotch Broth: Idlewild discuss Everything Ever ...