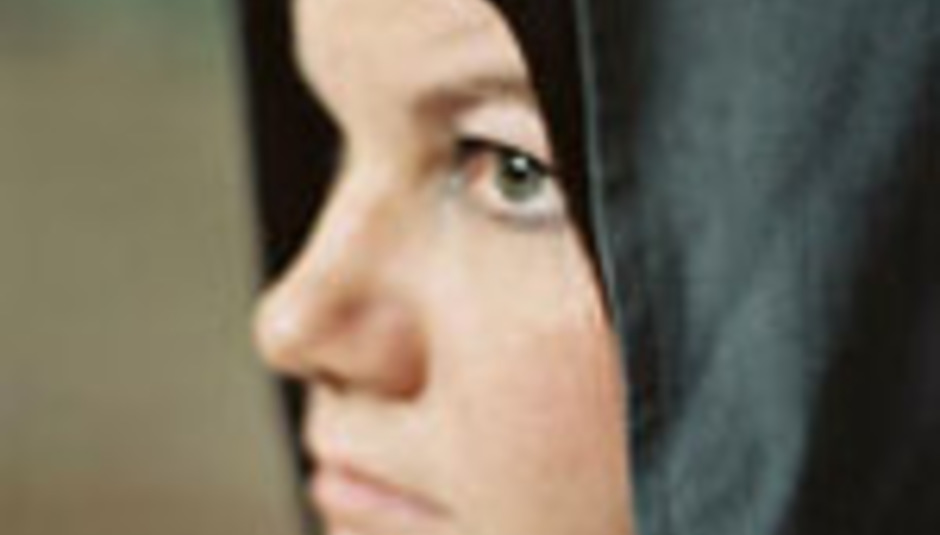 That we’re in the belly of a church, St Luke’s on London’s Old Street to be precise, is entirely appropriate: this dressing room – hot, low-ceilinged and absolutely claustrophobic – feels in almost every way like a tomb.

Yet today’s gathering assembles not to mourn a passing but witness the birth of something truly phenomenal: Cortney Tidwell, here as part of the Twisted Folk package tour alongside Howe Gelb, will, less than an hour after our interview, leave an entirely unprepared audience breathless. Hers is a talent previously untapped – allowed to shine only around the bars and clubs of her native Nashville – which is now gushing like a geyser before foreign eyes and ears almost recoiling, dumbstruck and unsure how such a small woman can project such a massive sound, a voice that could render a shocking siren a soft whisper should the necessity surface.

She smiles politely as I enter her temporary residence; the head of her label, Ever Records, has forewarned me: she can be temperamental, difficult to engage in conversation with a semblance of coherency if her mood’s not right. I’m thusly slightly nervous, worried that the creator of the year’s most magically bewitching debut – Don’t Let Stars Keep Us Tangled Up – will shoot my questions down in a flurry of yes and no responses: straight-faced and matter-of-fact, unemotional and unconcerned by promotional responsibilities. After all, her album is one that conveys a thousand feelings in forty-something minutes, that plucks at every individual heartstring with a delicacy so divine that it almost seems wrong to ask about its origins. Yet her welcome is warm; indeed, it’s almost as warm, albeit not as sticky, as the tiny room we spend the next few minutes in.

Cortney is excited: she’s in a new place, for the first time, and every morning promises an experience she won’t forget anytime soon. “We went by Big Ben, and it was like, right there,” she recounts, recalling the previous night’s journey through London. “I’d looked at pictures of it so many times… it was really amazing. It is amazing – I never thought that I would make it. I mean, I always dreamed of it, but y’know… I did a show with Lou Barlow one time, recently, and he said, ‘You’ve got to get out of here’, here being Nashville.”

And get out of there she did, hence our conversation, but chances are that she’d have spread her wings soon enough without Barlow’s advice: …Stars… is that good an album. Preceded by a self-titled EP that attracted broadsheet accolades, the record is one that sinks deep into the listener after but a single play; given repetition, …Stars… becomes one of those records. You find yourself, alone at work, humming a tune you can’t place, reciting a couplet you can’t hear in the context of a verse, and then you remember: it’s from that album, the one you so nearly overlooked because the artist in question wasn’t a Cat Power or a Beth Orton or a Björk or whoever. Soon, perhaps, that attitude will alter.

“The responses have been amazing,” the singer continues, lacing her sandals around her ankles; she’s still preparing for the show. “People are really quiet, and that completely freaks me out. The first time I played with Howe, you could hear a pin drop. I usually play places that are dives, but that are really neat places to play, with people heckling.”

Before descending into the venue’s innards, I pass its stage: upon it, left of centre, is a grand piano. Later – after a set spent stood with an acoustic strapped around her, sat behind a drum kit and leant over an Omnichord, sometimes simultaneously – Tidwell will surprise all in attendance by quietly and masterfully stroking her fingers over the striking instrument’s keys. It’s quite a climax. I mention its presence…

“How did you know I was going to play the piano?! I play an Omnichord! It sounds really good, and it’s nice to do something different, ‘cause I get sick of playing the same set every night.”

Tidwell’s voice fluctuates in volume – later, the tape recorder capturing her answers will be pressed against this writer’s ear too many times to count. After a period of whispers, a name emerges from the hiss: Mogwai. Tidwell is one of many relatively leftfield artists appearing at this summer’s Latitude Festival, and is particularly excited about sharing a bill with the Scottish post-rockers.

“I LOVE Mogwai… I hope I’m playing the same day as them.”

I comment, slipping into stereotype: that’s hardly the kind of taste I’d expect from a Nashville-based singer-songwriter...

Tidwell has a point: in case those previously noted points of reference failed to provide you with a hint, let it be known straight-up that Tidwell’s material is hardly of the traditional singer-songwriter mould. Her songs fluctuate stylistically, wildly, from track to track; influences are hard to nail down, but comparisons can be drawn: again, Cat Power and Björk feature (names mentioned elsewhere in the press include Mary Margaret O’Hara and Hope Sandoval), but so do post-rock acts not so many musical miles away from the aforementioned masters of striking soundscapes and internet rants. There are tremendous swells spread across …Stars…, sequences of bars that build into towering, terrifying walls of impenetrable noise, only to dissolve into harmony as swiftly as discordance had established itself. The record’s a far cry from the relatively smooth ride of her gothic-country – not my words – EP.

“I never recorded that EP with the intention of anyone hearing it, and I played the majority of instruments on that record. It took me, like, three years to make or something. But for this record, I got a band together, some of whom play in Hands Off Cuba, who I’ll have to bring back here with me because they’re frickin’ awesome. And I got William Tyler, who plays in Lambchop, to be in the band as well – he is so good.

It’s not only William Tyler that took time out from Lambchop to appear on …Stars… – also involved, on the duet ‘Society’, is the alt-country combo's singer, Kurt Wagner. The cynical will sigh, shake a head and leap to a wrong conclusion: nice toe in the door, that. Anyone that likes Lambchop particularly will check the song out, purely out of inquisitiveness. But the pair go back: “We’re neighbours, for God’s sake…”

What, when they were twelve?

Although she’s an experienced performer, hardened by playing in rowdy bars rather than the somewhat staler surroundings of the ICA (as she does a night or so before we meet), there’s a vulnerability to Tidwell’s interview persona that does come through, despite her often (surprisingly) hushed tones. However accomplished she is as a musician, the concept of having to talk about her music remains an alien one.

“I don’t understand why you guys wanna come talk to me! It’s beyond me, it’s nuts. Fortunately, I’ve only had one [bad interview], and otherwise it’s been super, I’ve just been having conversations. But it is weird.”

With an album like …Stars… already under her belt, though, it’s difficult to imagine Tidwell not becoming accustomed to the process of promotion. It’s a release worthy of from-the-rooftops celebration, of wholehearted recommendation and complete immersion. It will grasp you, tightly, and rarely release you to while away time with another’s work. Really, critics and consumers alike are going to want to highlight it to all and sundry, however weird that may still seem to the modest, personable and not-at-all-temperamental, today, artist in question.

Cortney Tidwell's Don't Let Stars Keep Us Tangled Up is released on July 10; her MySpace page is here. She plays London's Bush Hall on Tuesday July 11, and The Latitude Festival the following weekend.