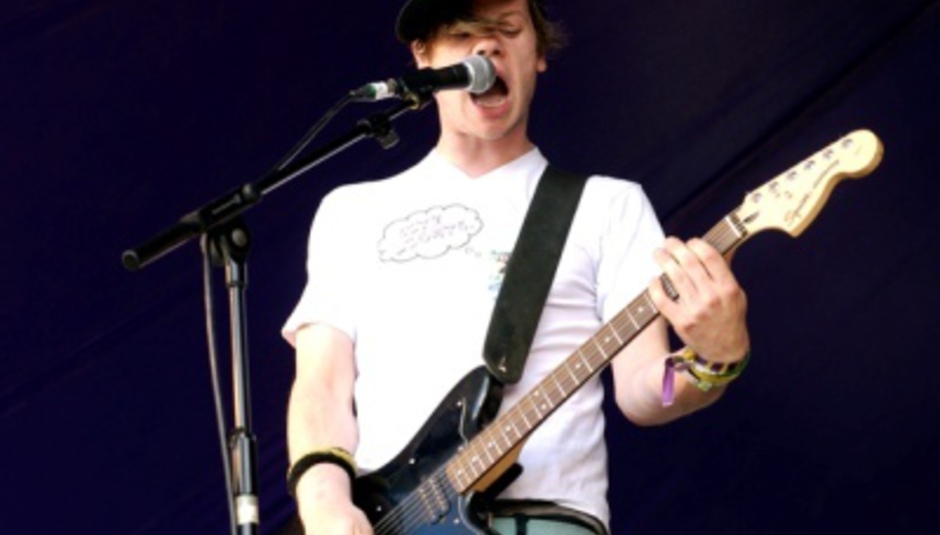 The video for Johnny Foreigner’s new single ‘Salt, Peppa & Spinderella’ has been banned from being broadcast on MTV, as well as other channels, by OfCom, due to the risk it may trigger epileptic seizure.

According to OfCom (website), the clip contravenes guidelines on strobing, fast-cutting and flashing images.

Writing from Japan, where the band are currently playing a number of dates in and around Tokyo, vocalist Alexei Berrow (pictured at this year's Truck Festival) sent the following bulletin via MySpace:

tokyo is just SLIGHTY AWESOME yes, we have a rock pub with our names above the door JUST LIKE KING ADORA had at the jug of ale in shitty technologically repressed birmingham england.

anyways, do you like epilepsy? cos mtv don't. our lovely shiny video for salt pepa & spinderella has been BANNED!!!!!!!!. for real. even tho we took the cocks out. likely every other music channel will follow suite and eventually we'll have to take it down too. but for now we'd like to invite everyone that likes our band but isnt epileptic to watch it and not have some seizures please.

this will eventually turn into the end of fahrenheit 451 i'm sure...

ps japanesessssssssss we're on the island stage at 4.20 pm. we = excitedddddddddddddddddd we've been told not to take water pistols on stage. a ha haha ha.

Somewhere in the middle of that: a request to watch the video, but to be careful doing so. So, here it is…

Johnny Foreigner- Salt, peppa and spinderella from Best Before Records on Vimeo

MTV have dropped us a line to reassure readers that the ban is not their doing. In an e-mail today, our contact confirmed that it's OfCom's guidelines that have led to the clip being deemed unsuitable for broadcast.

He added: "We loved and wanted to play the video but are restricted due to OfCom guidelines. MTV don't 'ban' videos in the UK, we just have to abide by government regulations or we risk massive fines and losing our license."

‘Salt, Peppa & Spinderella’ is released via Best Before on September 8, on Pac-Mac-yellow 10” vinyl (among other formats). The trio tour with Dananananaykroyd in September and October, calling at London’s Madame JoJo’s club for a co-pro show with White Heat and DiS on September 30 – find full dates on MySpace and tickets for London here.