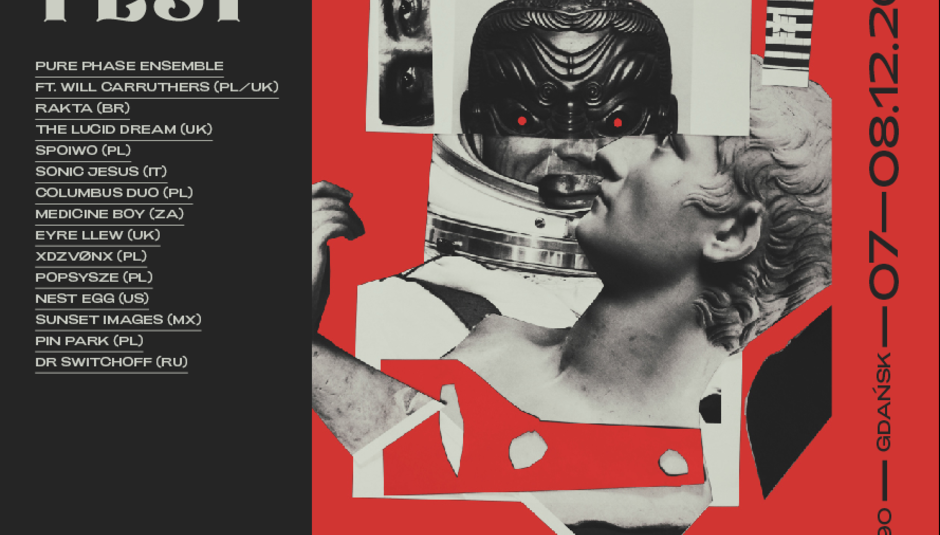 Drowned In Sound are proud to announce we'll be one of the media partners for SpaceFest! once more, having initially partnered with them last year.

Taking place at Klub B90 in the industrial heartland of Gdansk on Friday 7th and Saturday 8th December, this year's event sees the addition of a second stage for the first time since the festival began in 2011.

Now in its eighth edition, a total of thirteen acts are scheduled to play across both days including the traditionally guest curated Pure Phase Ensemble which was created especially for this festival. This year's curator is highly respected artist and musician Will Carruthers, who's spent the past thirty years playing in numerous bands including Spacemen 3, Spiritualized, The Brian Jonestown Massacre and Dead Skeletons. Following in the illustrious footsteps of previous curators Anton Newcombe, Mark Gardener, and Laetitia Sadier to name but three, the largely improvised Pure Phase Ensemble set having only been rehearsed over the five days prior to the festival at the city's Laznia 2 Centre For Contemporary Art.

As with previous Pure Phase Ensemble performances at SpaceFest!, the show will be recorded and released on CD in the early part of 2019. Weekend and day tickets are still available for the festival priced at 75 and 40 Polish Zloty (approximately £15 and £9) respectively) if purchased in advance, or 45 Polish Zloty per day on the day.

In the meantime, here's this year's line up and schedule.

Formed in North Carolina seven years ago, Nest Egg have been compared to Loop and Oh Sees among others. Their critically acclaimed second album Nothingness Is Not A Curse came out on Fuzz Club earlier this year while the band's live show is said to be unmissable.

Originally from Cape Town but now based in Berlin, Medicine Boy's swirling psychedelia evokes both your wildest dreams and darkest nightmares. Their set at Fuzz Club Eindhoven in August went down a storm and we're expecting more of the same here.

This Polish duo from Wroclaw create experimental electronica using original analogue equipment from the 1970s. Inspired by the likes of Neu! and Harmonica, their soothing ambient diatribes should provide the perfect soundtrack for when the midnight hour approaches.

We've been championing this Italian collective for some time now so it goes without saying how excited we are for their first appearance at Spacefest! With a new album Memories imminent later this month, expect to hear tracks from that as well as its predecessors Neither Virtue Nor Anger and Grace.

Essentially the brainchild of multi-instrumentalist Samuel Osorio, Sunset Images are one of Mexico's best-kept secrets. Last year's excellent Obscure Daze combined errant psychedelia with passages of textured ambience and distorted shoegaze so expect a similar heady concoction in the flesh.

Brazilian trio Rakta have been making spacious, tribal-influenced psych rock for five years now. Fusing the darker elements of post-punk with occasional excursions into transcendental regions, expect a myriad of sounds and styles throughout their headline set.

The eighth Pure Phase Ensemble sees the turn of Will Carruthers as guest curator. Fresh from releasing his excellent collection of memoirs 'Playing The Bass With Three Left Hands', Carruthers has a wealth of experience having spent the past three decades playing with a succession of bands including Spacemen 3, Spiritualized and more recently, Dead Skeletons. This year's cast of assembled musicians includes guitarist Adam Neubauer along with SpaceFest! organisers Ania Szynwelska and Karol Schwarz. As with previous editions, this one off performance is not to be missed.

Nottingham trio Eyre Llew have been making widescreen, ambient rock soundscapes for the past three years. Debut album Atelo came out to a wealth of critical acclaim at the tail end of 2017, while the band have just returned from an exhausting but highly productive tour of South East Asia.

One of three Gdansk based acts on this year's line up. Popsysze formed a decade ago and have released three albums in that time, the most recent of which (2017's Kopalino) contains arguably their finest body of work to date.

One of the most progressive bands to emerge from the UK psych-rock scene in years, The Lucid Dream combine elements of experimental space rock and acid house on the band's latest album <i<Actualisation to create a sound far beyond any of their contemporaries. Come and see what all the fuss is about. We guarantee you won't be disappointed.

Another local outfit from the city of Gdansk, Columbus Duo play mostly improvised, experimental minimalist music that incorporates ambient, noise and drone. Despite forming nearly twenty years ago, they're still relatively unknown outside of their native city. We expect that to change in due course.

XDZVØNX come from Wroclaw and describe themselves as "sacral noise mixed with dark electro." With a sound that incorporates broken beats, elements of hip-hop and stark white noise, it's probably fair to say XDZVØNX are one of the most original acts on this or any other bill in 2018.

Having formed in Gdansk in 2009, Spoiwo established a reputation as one of the most exciting bands on the Eastern European post-rock scene. Fusing classical and cinematic components along with eye-catching visuals, their live performances are a thing of beauty.

Closing SpaceFest! once more will be DJ Dr. Switchoff, whose combination of eclectic sounds and absurd visuals have traditionally closed the festival in previous years.