Shelter From The Ash 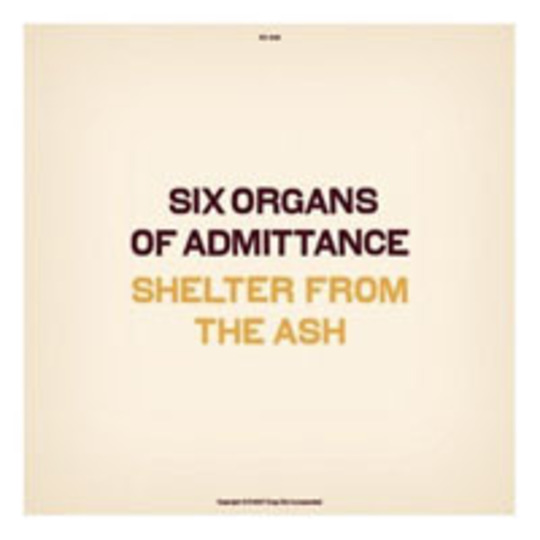 Following swiftly on from last year’s The Sun Awakens, a restrained yet masterful song cycle of an album, here we find Ben Chasny indulging himself and stretching out more with the help of some notable musical collaborators. Shelter from the Ash is a record of brooding meditation: if the late lamented Comets On Fire gave Chasny an outlet for his guitar mangling side then Six Organs Of Admittance is his introspective, enigmatic other self.

Watching Six Organs play live over the summer, it felt like one was intruding on a private musical conversation between Ben Chasny and his touring partner, Magik Markers mainstay Elisa Ambrogio. A tango-like dance was being played out on the stage with Chasny taking the role of a guitar-strumming matador whilst Ambrogio attacked her guitar in a bull in a china shop fashion. It was fun to watch in a perverse way. However, from this musical relationship Chasny has forged perhaps his most accessible and straight ahead track,_ ‘Strangled Road’_, a duet with Ambrogio. A beautifully dark song, it evokes long lazy days in dusty Andalucian bars and is book-ended with a soaring J Mascis-like solo. Psychedelic Spaghetti Western folk, anyone?

But yet again Shelter From the Ash pushes all the right buttons and is every bit the righteous successor to Chasny’s previous long-player and its precursor School Of The Flower; it moves from full-on and wigged-out psych overloads to mellow folk pickings in the blink of an eye. ‘Coming to Get You’ _is a chugging gothic horror romp of a song, which spills over into a squall of feedback and drums; blood curdling. Elsewhere, on tracks like _‘Final Wing’, Chasny weaves repetitive guitar lines that hypnotically root you to the spot. There’s something of the night about Chasny that is hard to pin down, but the songs woven here have an almost spectral presence. Maybe it’s a seasonal disorder, but this album suits the mood as the nights draw in and the shadows grow longer. But it feels like Chasny has his hand on your shoulder and is whispering secrets in your ear.

Returning to these shores later in the month with a full band, miss Six Organs at your peril. Ben Chasny should be treasured – he truly is out on his own. _Shelter from the Ash_ is_ another _masterpiece.