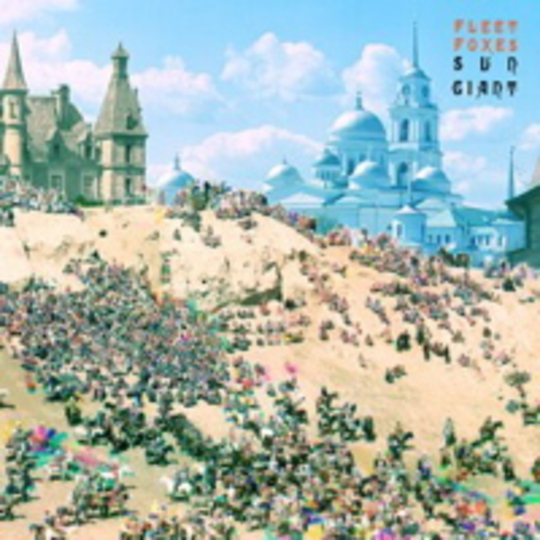 “A very smart and gifted friend of mine told me once that music is a kind of replacement for the natural world… Once the world became commonplace, mapped, and conquered, that mystery left our common mind and we needed something to replace it with and then came along music. I think she’s right, music is magic to me, transportative and full of wonder in a way that I have trouble getting from the actual natural world. All the human things that make the natural world so hard to connect with just aren’t there with music.”

For singer Robin Pecknold it’s clear this very ethos is translated directly into the sound of his band, Fleet Foxes. They are the latest act to emerge from the prosperous Seattle scene that, in the past 12 months, has produced the delectable Grand Archives, Tiny Vipers and The Cave Singers.

This five-track Sun Giant EP, the band’s first widely-available release in the UK, starts as it means to go on with a one-minute-thirty choral chant before the pluck of a mandolin enters, as if inviting us into a medieval province. Earthy finger-picked acoustics and plucky electric guitar lines provide the foundation on songs such as ‘English House’ where Pecknold’s lyrics - like a medieval poet writing intricate winding sentences about the villagers and their gooses, ploughs and ghosts - swim amongst Grizzly Bear-like thick harmonies. The song quickly develops to a canter with rolling tom-drums – “You go with your two feet will, down through the cold lane there to Brighton, a country house a liar and a louse live there” sings a vivid Pecknold – before pausing for further reverberated chant and returning to a floating, genteel trot. The classy production duties courtesy of Phil Ek (Built To Spill, The Shins, Band of Horses) are evident as he once again polishes this creative group’s raw ideas, adding trademark reverb and echo along the way. But Fleet Foxes can’t just be lumped into the cosmic-pop territory of BoH or My Morning Jacket, for they fit a more eclectic mould occupied by acts such as Midlake, Yeasayer and orchestral-pop collective Pine Top Seven.

Fundamentally, Fleet Foxes’ approach takes popular song back 40 years to a point where music sounded uncomplicated and fresh. Simple and beautiful. Even though most songs here last nearly five minutes, they never drag. There is always an interesting piece of instrumentation fading into and out of earshot. The strong melody behind ‘Drops In The River’, for example, is something Crosby, Stills, Nash and Young would have been proud to have sung as it builds organically, up and up, to reach a vibrant pinnacle of instrumentation and intricate vocal harmonies. Highlight ‘Mykonos’, with its impressionistic lyrics and unforced melody, builds, yet again, to a dramatic breakdown gripping the listener to chants of “Brother you don't need to turn me away, I was waiting down at the ancient gate” accompanied by dense harmonies. It’s more like two songs in one, with elements of baroque composition interspersed. Closer ‘Innocent Son’, a sparse acoustic number, contains shades of a bottom-of-the-bottle brooding Ryan Adams that does away with conventional song structure, like a sobering strum.

Fleet Foxes are a welcome arrival representing music, in the modern day, as an outlet just to be emotional - a place where original but melodic imagination and structure can flow. Rich and deftly arranged, this is a confident and crafted appetiser for what is set to be a captivating debut album when released in June.