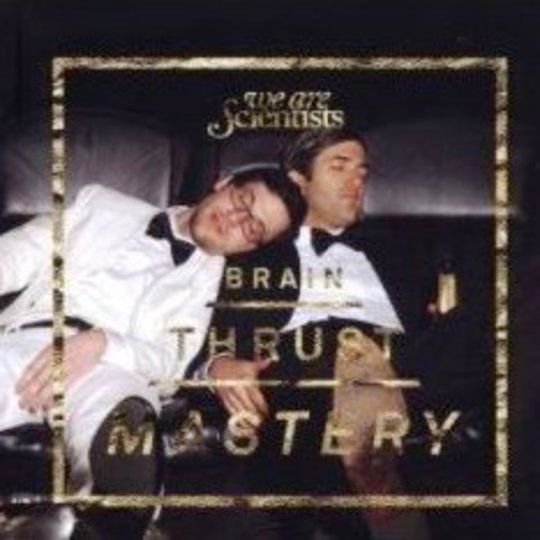 Of all the band’s who had a triumphant 2005 into ‘06, one of those you feared for a second time round were Brooklyn’s We Are Scientists**. A perfectly passable and enjoyable band, you sensed that we were dazzled more by their wit and sleight of tongue than any real notion that this was a band that counts. That’s not a criticism by the way – not everyone could or should be Radiohead – but it does pose a problem. Would their charms stand up another time round? Or would we draw back the curtain of mirth and reveal another bog-standard band fumbling with reformed riffs ad infinitum? Well, yes and no. While not grabbing you by the lapels, shaking you hard and demanding your love and servitude, Brain Thrust Mastery_ has enough to keep you interested and contains much to enjoy.

Encouragingly, the two Scientists (now shorn of drummer Michael Tapper) have moved beyond their self admitted ‘genre specific’ debut and thrown a heap of new ingredients into the pot. Now there’s wincing feedback, ‘80s synths and pop-heavy production to add to the former fare of sharp riffs and equally lysergic lyrics. Tracks like lead single ‘After Hours’ will welcome the old back to the fold with its constant, melodic guitars and vocal hooks, while opener ‘Ghouls’ and ‘Altered Beasts’ replicate the enjoyable trick, piling on hooks and harmonies by the dozen. ‘Chick Lit’ and ‘Impatience’, two of the best tracks on the record, have the shiny, fluid thumping pop production that you might to expect to find more on a Britney Spears comeback track than a We Are Scientists album, but principal songwriter Keith Murray has merged these sounds with his own particular songwriting rather well, showing the desire to broaden his palate, and widening the possible reach of his duo. The suspicion is confirmed early on, with ‘Lethal Enforcer’ sounding like a cross between Sade and Duran Duran; luxurious yet hesitant, a piece of glossy white soul balladry. It’s an oddity, but somehow rather endearing.

There are some errant tracks on the record: ‘Spoken For’ starts well, but crumbles under ridiculous spurts of guitars, ruining its intimacy. The scruffy, distorted ‘Dinosaurs’ feels like it should have been placed on the band’s between-album odds ‘n’ sods collection Crap Attack rather than a new record proper and closer ‘That’s What Counts’ attempts to repeat the feel of ‘Lethal Enforcer’ but throws in a unnecessary sax solo and pushes the envelope too far and straight out of the door.

It’s a mixed bag then: sometimes they hit bull’s-eye, other times they miss the board altogether, but the erratic results reveal a band dragging themselves out of their comfort zone. Whether that’s rewarded or not by a sustained or even growing fanbase, we’ll have to see. They deserve extra points for trying, though, and more than a little respect.