Anywhere I Lay My Head 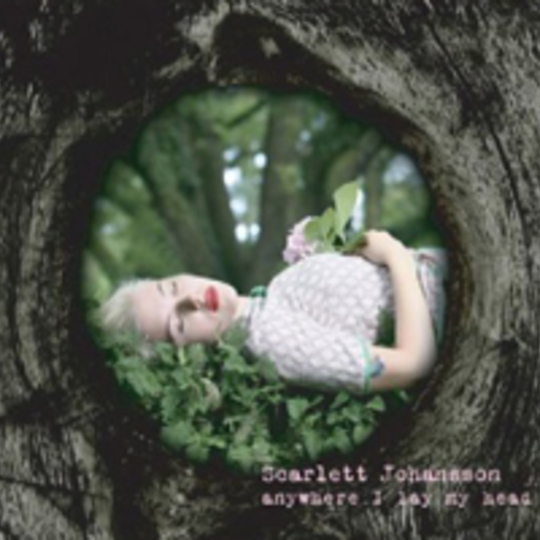 If you’re not going to credit her with anything else, you at least have to acknowledge Scarlett Johansson’s savvy in ensuring the softest landing possible with her spotlighted swoop into the music world on Anywhere I Lay My Head, an unlikely collection of Tom Waits covers first mooted as a project back in 2006.

In surrounding herself with a first-rate cast of collaborators – TV On The Radio’s Dave Sitek produces; there are contributions from members of the Yeah Yeah Yeahs, Celebration and Stars Like Fleas – the actress has reduced her chances of going arse over tit to a slim prospect indeed. In fact, Anywhere...’s hipster credentials are exhausting - throw in David Bowie whinnying like he’s put his hip out of joint on ‘Fannin’ Street’ and you might as well rope in Alan sodding Vega to mind the chihuahua while she’s out the house.

But if Johansson’s aim was to replicate the husky charisma she exudes on screen then she falls flat here; literally, since on many of Anywhere…’s tracks she chooses to adopt a low, Nico-esque croon that’s not entirely within her register. Which might not matter especially if it wasn’t far and away her main contribution on an album purporting to reinterpret one of the most charismatic singers and lyricists in recent memory.

The sound itself settles at a beguiling, shoegazey bombast with recognisable elements – Sitek’s horns, Celebration’s Hammond organ – thrown into a mix that's more Beach House gone Vegas than Bukowski pissed in a kitchenware store. Anywhere…’s stylistic departures from the source material are bold, certainly, and as nuanced as you might reasonably expect from such a stellar company, but its victories ring somewhat hollow when you pause to consider there are lines as great as these being lost under the swathes of porous static.

It’s understandable, of course, that Johansson wouldn’t wish to compete with Waits’ wasp-gargling theatrics, and Sitek’s been smart in using her voice as another texture in an expansive pallet, but a few more risks wouldn’t have gone amiss – the title track’s gentle sway is disappointing, in particular, given the original has to go down as literally the least ambient song recorded, ever.

There are victories to be had, however, especially with a knockout track selection like this – ‘Fallin’ Down’ sees Johansson ramp up her vocals a notch to great effect, and ‘Town With No Cheer’s insistent sax refrains lend appreciable heft to Waits’ wry tale of sobriety in the blazing desert heat.

But ‘I Don’t Wanna Grow Up’ (from 1992’s sorely undervalued Bone Machine) is given a cloudy Europop makeover that turns a great premise into a faintly seedy Mini-Pops slip-up thanks to a coquettish vocal. And Johansson’s sole original, ‘Song For Jo’, far from providing the centrepiece its positioning would suggest, is more of a low-key interlude; pleasing but essentially unmemorable.

Perversely given the record’s comprehensive musical overhaul it’s perhaps a surfeit of respect for the source material that proves Anywhere…’s undoing; for all its undoubted accomplishments there’s a lingering suspicion that this is too safe, too respectable a record to do justice to an artist who remains forever mid-topple from the bar stool in the popular consciousness. And if there’s one thing Waits has always been good at, it’s sniffing out a rigged game.

A Land For Renegades